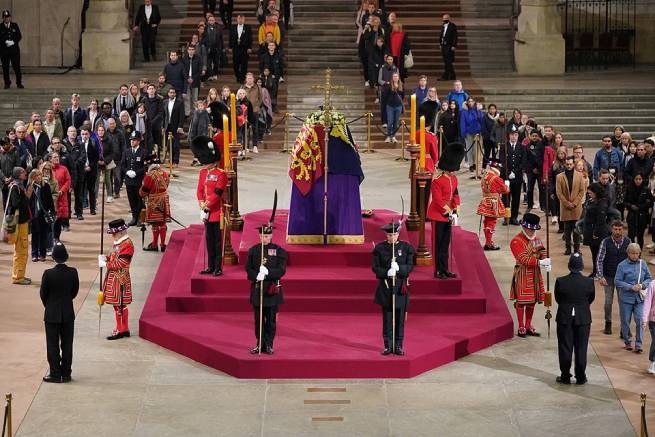 The main part of the funeral ceremony of the British Queen takes place today in Westminster Abbey, which seats about 2,200 people.

On Monday, September 19, the funeral of Queen Elizabeth II began in the UK. About 500 foreign high-ranking guests are present at the funeral ceremony, including world leaders and state representatives. The Royal Palace is broadcasting the funeral live.

The body of Queen Elizabeth II, who ruled Britain for a record 70 years, will be interred on the grounds of Windsor Castle, in the memorial chapel of King George VI, where the Queen’s parents, King George VI and his wife Elizabeth, and sister Princess Margaret are buried. The remains of the Queen’s husband, Prince Philip, who died on April 9, 2021, will also be moved here.

After the funeral, at 14:00, the mourning service ends and the whole of Great Britain will fall silent in two minutes of silence. The Queen’s coffin will then be paraded to Wellington Arch at the corner of Hyde Park, after which it will be transferred to the state hearse, from where it will be sent to Windsor.

At 5:06 p.m., a new procession will take place at Windsor Castle: King Charles III, Queen Consort Camilla and other members of the royal family will join the procession to take the coffin to St George’s Chapel. At 18:00 there will be another memorial service, more intimate.

Around 7:30 p.m., the Queen’s body will be interred in the King George VI Memorial Chapel, with only members of the royal family present.

Queen Elizabeth II died at the age of 97 on September 9th. Charles III, her eldest son, became the new king. Representatives of only a few countries were not invited to the ceremony – Russia, Belarus, Syria, Venezuela, Afghanistan and Myanmar.