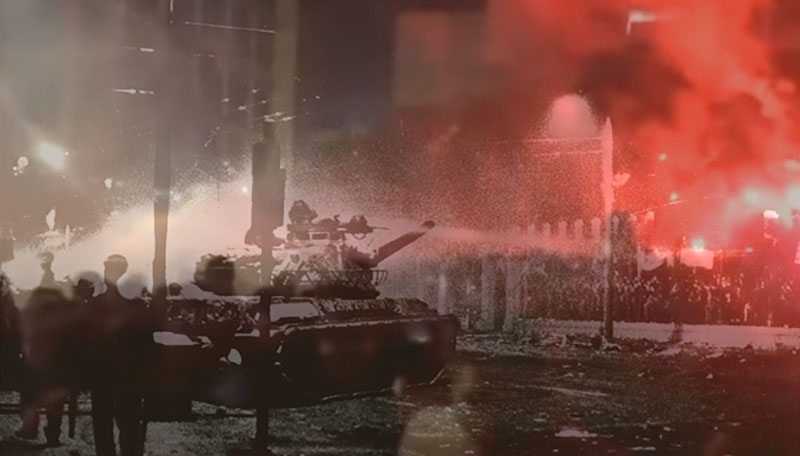 Members of the MAT Special Squad of the Hellenic Police used tear gas and water cannons during a concert attended by about 5,000 people on the campus of the Aristotle University of Thessaloniki.

The concert by Thanassis Papakonstantinou and other Greek artists was aimed at supporting and solidarity with students protesting against the police on university campuses. Several MAT units were deployed in the area of ​​the concert.

All was going well when clashes broke out between the riot police and the students shortly after midnight on Friday. According to some reports, a group of people left the concert and attacked the police, throwing various objects at them.

The police then broke into the campus, pelted those present with tear gas grenades and used water cannons on the spectators. There was a panic, during which many people were injured.

Video: Police use tear gas at a concert

Spectators tried to cover their faces with clothes to protect themselves from the gas, looking for family members, friends and relatives.

Video: Tear gas was used in two places, causing panic and crowds at the concert. Someone screams “inside 10,000 people”

The concert was interrupted, and everyone began to scatter in fear.

Witnesses told local media thesstoday.gr that some people had panic attacks, everyone tried to run away, some in wheelchairs were desperately looking for a way out, people lost consciousness.

“We heard the sounds of flashbang grenades, children crying, car alarms and Thanassis singing on stage full of tear gas. Unparalleled experience. We could see how young people tried to climb onto the railing to avoid panic, ”they said.

According to the Contra TV channel, several people were injured.

After people ran out of the police-assaulted campus, they tried to protest on Ignatias Avenue, but were dispersed by the police, who also used water cannons and tear gas.

At the same time, some people remained in Kamara, where they created barriers in the streets, set fire to garbage cans, and the atmosphere was suffocating throughout the episodes.

In a statement from the Thessaloniki Police Department reported that they were attacked and that they did not use tear gas at the concert venue (and the video showing the police and water cannons is probably Putin’s machinations).

One person was arrested and four others were detained. It is reported that the arrested person is a 27-year-old Greek who is not … a student and violated public order.

Government pushes for deployment university police in Athens, Thessaloniki and other universities in the country, despite the objections of rectors, teachers and students.

PS Gentlemen, democrats, don’t stop now, next time use tanks, use the experience of November 1973.