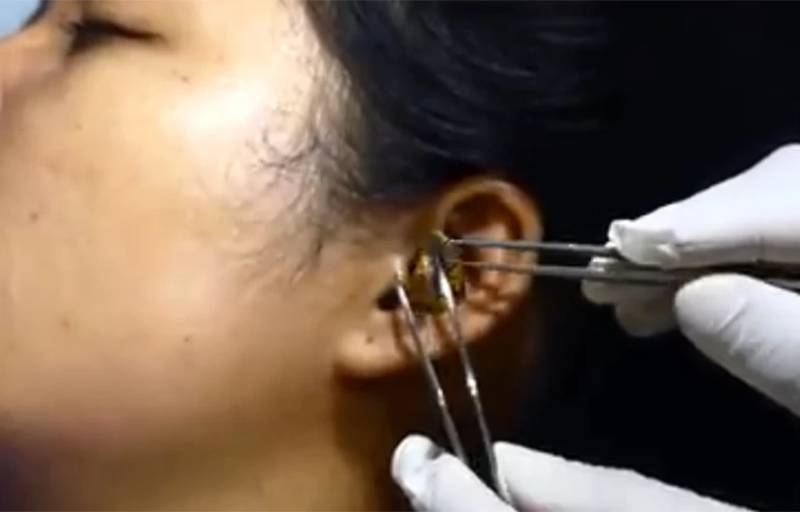 A video showing the moment a surgeon tried to remove a live snake from a woman’s ear has gone viral with over 125,000 views.

However, viewers are trying to figure out if this is a real or fake video. “Snake crawled into ear,” captioned a video uploaded to Facebook, shared by Indian social media sensation Chandan Singh with his 20,126 followers. However, it is not clear where, when and how this event took place, according to the Economic Times.

In the nearly four-minute video, the alleged doctor uses tweezers to try to remove a yellow-and-black snake sticking its head out of a woman’s ear. Unfortunately, despite the tools at his disposal, he can’t get a hold of her.

The viral video ends without revealing whether the operation was successful or not, leaving viewers in shock. “Looks like a fake doctor,” someone commented on Facebook.

Some who watched the video directly wrote that it was a fake. “100% false,” wrote one, while another wondered how he managed to fit the rest of the snake’s body into the woman’s ear. It seemed strange to another that the snake stuck its head out – it means that it crawled into her ear, and then turned around in such a limited space.

However, this is not the first time that a creature (usually insects) has penetrated someone’s ear. In January, a New Zealand man faced the worst nightmare of any insectophobic after a cockroach crawled into his ear and stayed there for three whole days. A similar incident happened to a tourist snorkeling in Puerto Rico. After swimming, a crab was found in his ear.