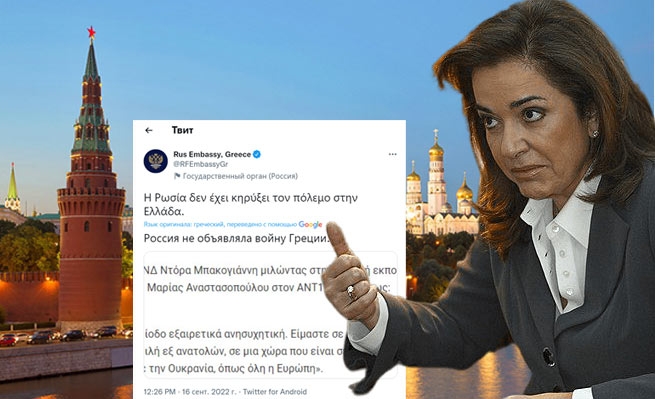 in a laconic phraseRussia did not declare war on Greeceimplying that there is no question of a unilateral declaration of war by Greece, Moscow responded to statements by the sister of the prime minister and former foreign minister, Dora Bakoyannis.

In particular, yesterday Dora Bakoyannis, speaking in the morning show of Georgios Papadakis on ANT1…., declared “war” on Moscow, stating that we are at war with “Russia”!

The MP from the New Democracy stressed: “We are living in a period of great anxiety. We are in a country that has a specific threat from the East, a country that is at war with Russia because of its position towards Ukraine, like the rest of Europe”.

After the New Democracy government sent weapons and military specialists to Ukraine, joined the full package of sanctions and expelled some of the diplomats, it was quite possible to expect a complete break in relations, qualifying the situation as a “state of war.”

Nevertheless, such statements from such an influential person are either problems of intemperance or a deliberate escalation of the atmosphere in a situation where the party, which is led by her nephew, is rapidly losing popularity.