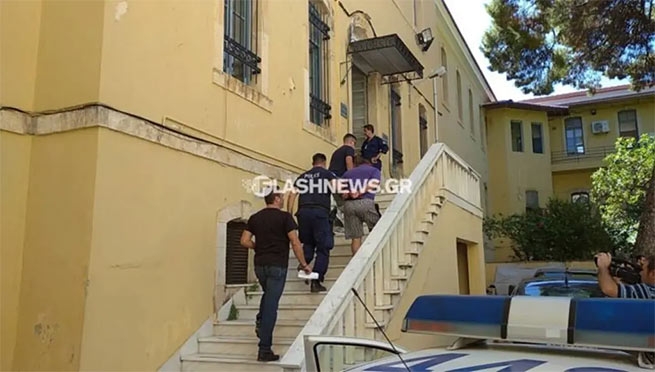 The court of Chania today began the trial of a 52-year-old man who is accused of domestic violence against his children aged 4, 13 and 16, causing bodily harm, as well as resisting arrest.

According to ERT Chania, the court will be held today on the charge of a minor offense, and tomorrow on Saturday, it is expected to testify before the investigator on the second part of the case, on charges of a serious crime.

In particular, the man was charged with: causing physical harm to feeble-minded persons and especially minor children, attempted infliction of grievous bodily harm to his wife, illegal possession and use of weapons.

At the same time, people who have been attacked by an angry man are waiting for the outcome of the trial in order to file an injunction, because, they testify, they fear his reaction if he is not imprisoned.

Animal welfare associations are also said to have filed charges against him for mistreating two of his dogs.

What the neighbors say

Shocking neighbor testimonies have surfaced in a wild new case of domestic violence in Nea Chora Chania, starring a 52-year-old father. Three of his children seem to have experienced nightmare moments, because the father often took out his anger on them.

Neighbors of the family often witnessed the aggressive behavior of the father towards the children and reported to the police, but she could not do anything, as the mother said that everything was in order. Yesterday, however, everything changed. The police were called, and the 17-year-old girl decided to break the silence, and the 65-year-old neighbor, who was attacked by the man along with her brother-in-law, also filed a complaint against him for causing physical harm.

“Too many times we witnessed bad situations in this family. The behavior of the man was and remains very aggressive. Every time something happened in the house, we called the police, who immediately came to the house. However, the mother never reported the incident, and also manipulated the children to keep quiet. She kept telling the police that “everything is fine”, “there is no problem”, “we are family people”. And so the police could not do anything. But today his daughter decided to go to the police, to protect their brothers and sisters,” the neighbor’s daughter told cretapost.

The mother of the children scolded the neighbors, who alerted the police, at the time of the wild fight and beating she was in the house with two other children.

“The children’s mother lashed out at us because we called the police. She was present during the fight and the brutal beating of her daughter and did nothing. The mother was also abused, and I don’t know why she is silent. Instead, she threatens us every time when we talk“, the neighbor said.

The furore was caused by the reaction of the accused man, who burst out laughing and said that all this … fiction! “In fact,” as he stated, “women often loosen their tongues when they want to be beaten”!

In addition to his children and wife, the man also seems to have beaten his dogs. According to the daughter of a neighbor, two dogs are in a state of shock from the injuries inflicted on them. “He has two dogs, and if you see how he treated them, it will be a shock. These injuries that the dogs received were inflicted on them. He violently beats them in the face and legs,” the neighbor emphasizes.

After the arrest of the head of the family, the children returned with their mother to the house. On Thursday she had to go to work, so she took her two youngest children to her grandparents. At the same time, the eldest was locked in the house. “He locked her up without food or water. We took her away and she is at our house,” the neighbor’s daughter told cretapost.

The girl decided to break her silence and now tells the police and neighbors about everything that she had to endure. In fact, as she said in a conversation with the daughter of a neighbor, “I’m used to being beaten, but I want to protect my brothers and sisters.” Residents of the house rallied around the girl and her brother and sister, and intend to help in any way they can, despite the constant threats from the mother and father. “We support her to protect the children because they are going through very difficult situations. We want the children to be protected. The authorities must intervene in this matter. The children are in danger and we must all do something about it.”“, – emphasizes the daughter of a neighbor.

For domestic violence, the prosecutor of Chania filed a serious crime charge against the detained, and it is expected that on Saturday he will be brought back to the Chania city court to testify.

Given the laws of Greece, most likely the sadist will receive the maximum punishment for beating dogs…