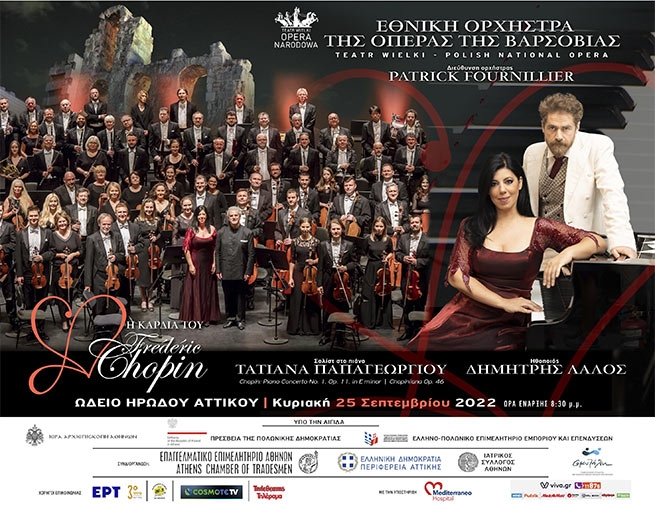 Frederic Chopin’s heart will beat in Herodium on Sunday 25 September 2022, to his most beautiful melodies.

We will hear the most iconic and famous First Piano Concerto in E minor, which the composer wrote at the age of 20, inspired by his love for the young Constance, and presented it at the farewell at the Warsaw Opera House before leaving. From the Warsaw Opera, from the same theatre, an orchestra will come to Herodium and perform the same concert, as well as the famous Chopiniana, which has incorporated the composer’s most favorite dance melodies.

As part of a prestigious collaboration, the great Greek pianist Tatiana Papageorgiou will collaborate with andhistoric symphony orchestra of the Warsaw Opera Wielki Theater – Polish National Opera. This is one of the most famous orchestras in the world. He will present masterpieces of the world symphonic repertoire to the Athenian public, paying tribute to the great Polish composer Frederic Chopin, a legend of world romanticism, an exponent of eternal passion and brilliant virtuosity. His work will be revealed on stage through his masterpieces for piano and orchestra performed by the iconic Polish orchestra.

National Symphony Orchestra of the Warsaw Opera “Teatr Wielki – Polish National Opera” comes to Greece for the first time under the guidance of his chief musician Patrick Fournillier, French conductor and artistic director. Patrick Fournillier has had a distinguished career conducting the most important works of the symphonic and lyric repertoire. He has received the highest international awards and has conducted many of the most famous symphony orchestras in the world (La Scala Theatre, Toscanini, London, Paris, Berlin, Vienna, Amsterdam, Oslo, Milan, Zurich, Prague, Leipzig, Dresden, Sydney, Washington, Metropolitan Opera in New York, Los Angeles, Philadelphia, Moscow and St. Petersburg).

The surprise of the evening will be the appearance on stage of the popular actor Dimitris Lalos in the role of Frederic Chopin, who interprets the original texts and letters of Chopin in the introduction and between parts of the musical work, acquaints us with the thoughts and feelings of the composer, takes us to 1830-1849, at a time when he wrote his own works. The texts are taken from the composer’s archive in Warsaw and edited by Tatjana Papageorgiou, who is also a musicologist and has systematically studied Chopin’s works in recent years.

The heart of Frederic Chopin rests in his beloved Warsaw, as he asked. His music travels forever in time. His heart will beat in Herodium under the Acropolis with the music of love. The event was organized under the auspices Athenian Archdiocese.