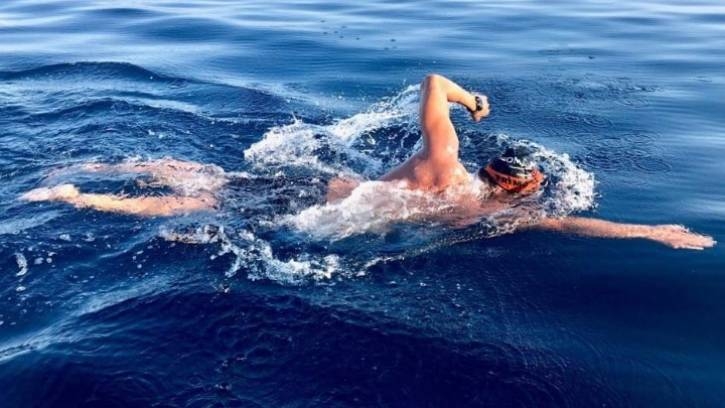 The attempt of the Greek athlete to overcome a rather large stretch in the open sea by swimming, Spyros Chrysikopoulos, was crowned with success.

The swimmer started on Wednesday 7th September from Rhodes and after nearly two and a half days of sailing (about 64 hours) arrived in Kastellorizo ​​late on Friday 9th, where he was greeted by many people.

According to Ροδιακή, at the end of last month, Spyros Chrysikopoulos decided to repeat the swim he made in 2018 and cover a distance of 80 nautical miles, approximately 140 km, since his first attempt failed. In fact, his desire and goal was to cover this distance in 48 hours.

His first attempt was made in October 2018, but weather conditions did not allow him to complete his attempt, and therefore, after 30 hours of sailing and “traveled” about 100 km in the open Aegean Sea, on the second night he decided to “give up”.

According to the swimmer: “Weather conditions were quite dangerous as I approached the coast of Turkey, despite slightly better initial forecasts. I am in good health and am in Kastelorizo ​​receiving medical care for stomach problems due to high waves.”

It should be noted that the journey of the then 27-year-old athlete began on Monday, October 8, from the facilities of the Rhodes Naval Group and concerned his attempt to connect the capital of the prefecture of the Dodecanese with the southeastern gate of Europe, Kastelorizo. It was a symbolic project, the purpose of which was to overcome human possibilities and show the achievements of the Greeks. In fact, his idea was the material for the creation of the film. Throughout his journey, observers followed him on a boat.

The young athlete has already made history in long-distance sailing on the high seas, covering 104 km in 34 hours of continuous sailing in the fourth passage of the Toroneos Gulf.

Spyros Chrysikopoulos is the only active Greek athlete who today engages in long swims on the high seas. At the same time, he is already included in the cohort of athletes who managed to overcome the distance of 100 kilometers.

About his idea, which this time was crowned with success, the athlete reports the following: “On Wednesday 07/09/2022 at 6.15 I started from Rhodes. My intention was to reach Kastelorizo. It is with great excitement that I inform you that on Friday September 9, 2022 at 22:20, after 64 hours and 5 minutes, I have arrived at my destination! I have to thank the support team, my Dr. Christos Vassos who has been by my side all these hours, and of course my sponsors, without their support the project would not have been possible.”