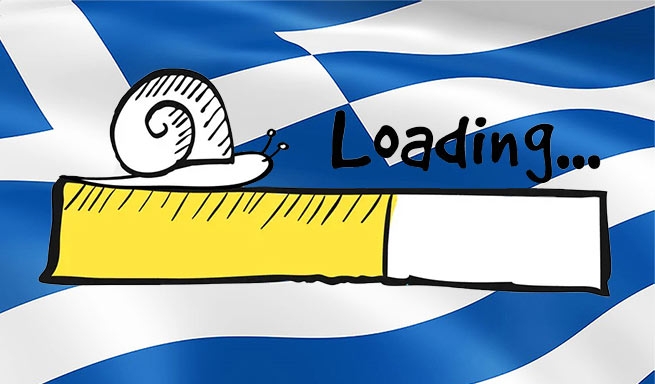 Greece has the slowest internet in Europe, despite significant investments that have been made in recent years, and internet services remain among the most expensive relative to people’s incomes, according to the cyber company’s annual digital quality of life report. Surfshark.

According to the 2022 index, Greece fell by one position compared to 2021 , ranking 39th out of 117 countries worldwide, and 29th out of 38 European countries surveyed. This is because in the five criteria assessed by Surfshark, Greece improved its position only in the digital governance-related criterion.

Breaking down each criterion, the financial ability to pay for internet services essentially measures whether the payments are cheap on a citizen’s income. This is Greece’s Achilles’ heel, as this is where it performs the worst, ranking 67th compared to 61st last year. This is because to buy 1 GB of mobile data this year, users in Greece will have to work 6 seconds longer than last year. Fixed internet connection fees are also high. To pay for the cheapest connection, Greeks have to work three hours and 46 minutes every month, which is 12 times more than households in Israel, where it is enough to work 19 minutes a month.

In the area of ​​Internet security, Greece maintains the 1st place, according to the report, which looks like a subtle mockery, amid the latest opposition wiretapping scandals and the claim that the security services are wiretapping at least 15,000 people.

In e-governance, the country ranks 55th from 59th last year, with an improvement due to the readiness of the state and business to use artificial intelligence. On this sub-criterion, Greece has moved up ten positions to 48th from 58th in last year’s report.

Findings that are of particular importance given that even after the pandemic, teleworking and distance learning are still being used to a large extent, and now many forms of entertainment, such as streaming platforms, require Internet connections and high speeds.

PS The report only confirms what we concerned Greeks have known since…ever.