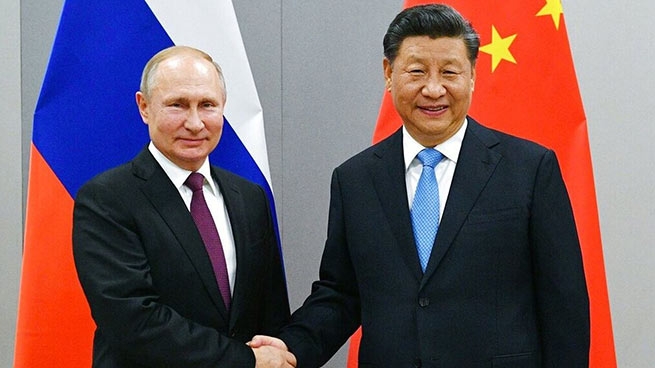 Xi Jinping assured Vladimir Putin that China intends to play the role of a “great power” along with Russia, and we see how Beijing already not only shares Russia’s position on global security issues, but is also ready to side with Moscow.

“In the face of the colossal changes of our time on a global scale, unprecedented in the history of our time, we are ready, together with our Russian colleagues, to set an example of a responsible world power and play a leading role in bringing such a rapidly changing world onto a trajectory of sustainable and positive development,” — quotes the Chinese leader RIA News.

The Chinese leader added that “China and Russia should protect the interests of regional security, developing countries and emerging markets, and strengthen coordination within the SCO, BRICS and other international organizations”.

The President of Russia, for his part, noted that the foreign policy tandem between Moscow and Beijing plays a key role in ensuring global and regional stability.

“We jointly stand for the formation of a just, democratic and multipolar world order based on international law and a central role, and not on some rules that someone has come up with and is trying to impose on others, without even explaining what it is”Putin said.

He stressed that attempts to create a unipolar world have recently acquired an “absolutely ugly shape” and are completely unacceptable for most countries. In addition, the Russian leader praised Beijing’s balanced position on the Ukrainian crisis.

Confirmation of the words of the leaders of China and Russia is the joint patrol announced by the Russian and Chinese navies in the Pacific, which indicates the activation of the military bloc, and statements made this afternoon show that this is only the beginning.

Russian military technology and natural resources, combined with China’s inexhaustible manufacturing capabilities, could turn the two countries’ armed forces into a first-class military giant. It is possible that Chinese warehouses are now open and millions of tons of rocketry, ammunition and drones (China has more than 45,000 drones of all types in service) are passing into the hands of the Russian military.

“China is ready to cooperate with Russia to assume the responsibility of a great power, play a first-class role, and bring stability and positive energy to a world dominated by chaos,” Chinese President Xi Jinping said during a meeting with Russian President Vladimir Putin in Samarkand.

Xi and Putin meet on the sidelines of the Shanghai Cooperation Organization summit in Samarkand. The last time they met in person, just a few weeks before the Russian attack on Ukraine on February 24, 2022, they announced “limitless” cooperation and signed an agreement to cooperate more against the West. However, until now, China has not supported Russia in the war against Ukraine, abstaining during voting in the UN Security Council and has not supplied Russia with weapons and military equipment.