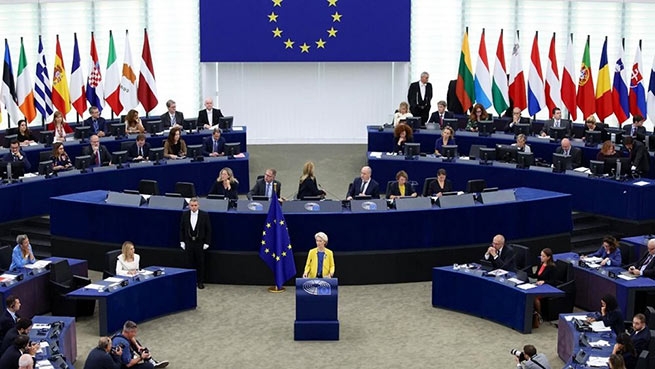 European Commission President Ursula von der Leyen expressed her unwavering support for Ukraine in her State of the Union speech at the plenary session of the European Parliament today, while warning that Europe has tough times ahead.

We have brought Europe’s inner strength back to the surface.
With unity, solidarity and determination.

“There has never been a debate about the state EU at a time when war is raging on the European continent. But an entire continent rose up in solidarity… The Europeans did not hide or hesitate, they found the courage to do the right thing… As soon as the Russian troops crossed the Ukrainian border, our reaction was united, decisive and immediate. And we should be proud of it.”

She warned that “the coming months will not be easy.” “Let’s be completely honest: there is a lot at stake. Not only for Ukraine, but for all of Europe and the world as a whole. And we will be tested. We will be tested by those who want to use any division between us. This is not just a war This is a war against our energy, a war against our economy, a war against our values ​​and a war against our future, this is autocracy against democracy, and I am here in the belief that, through courage and solidarity, Europe will prevail and Putin will be defeated,” the President of the European Commission stressed.

“Our solidarity is unshakable”

“The solidarity of Europe with Ukraine will remain unshakable,” added the chairman of the commission. “Solidarity will continue, with weapons, with funds and with sanctions, the toughest sanctions the world has ever seen,” she stressed.

According to her, “Russia’s financial sector is barely surviving. We have excluded three-quarters of the Russian banking sector from international markets. Nearly a thousand international companies have left the country. Car production has fallen by three-quarters compared to last year. The Russian army is taking chips from dishwashers and refrigerators to repair military equipment because it has run out of semiconductors.Russian industry is in ruins.

She also stressed that “the sanctions will not disappear, we are not going to retreat, and the same applies to the economic support that we provide to Ukraine.” We will continue to allocate funds for the reconstruction of the country.”

Turning to the energy crisis, the Chair of the Commission noted that discussions have begun on a framework of emergency measures, including:

“Too high a price”

The chairman of the commission stressed that the EU must get rid of Russian fossil fuels, noting the “very high price” of this dependence. “Russia continues to try to manipulate the energy market,” said Ursula von der Leyen, noting that Europe should find more reliable partners. She also noted that last year the share of Russian gas was 40%, and now it has dropped to 9%.

The chairperson of the commission also mentioned the struggle households are having to pay their electricity bills, noting that prices have risen 10 times in recent months.

PS Judging by the mood of Ms. Ursula von der Leyen, difficult years await Europe. Apparently, the “war to the last Ukrainian” smoothly turns into a “war to the last European.” Gentlemen from across the ocean can be satisfied. The European Union, as a competitor to the United States, is overthrown.