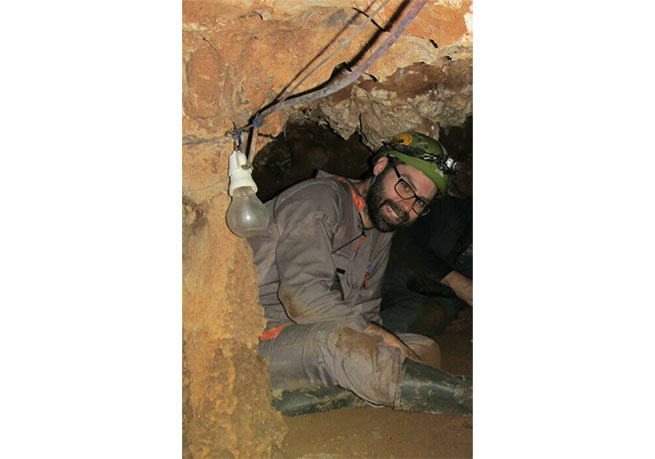 About the underground city under Athenswhich we don’t know aboutstacked stories, myths and urban legends. Part 1.

On state TV channel ERT “With a new look” took a tour of the parts of Athens’ extensive underground network that are worth visiting.

“One of the galleries is six meters below the pavement. In addition to the beautifully built tunnel, underground rivers also flow here, which reach the central areas of the capital, such as the Zappion National Garden, ”says the“ guide ”of this little“ trip ”, Panagiotis Deuterios, civil engineer and speleologist.

Starting with the second city that is gradually being created near Athens due to the expansion of the metro network, and listening from time to time to myths and urban legends about what supposedly happens deep underground, I began to look for the “bible” of “secret Athens” – the book of Ioannis Giannopoulos about the underworlds of Athens and the conspiracy stories that accompany the capital, which became a crazy bestseller in the late 90s and made many people imagine phenomena not of this world, inexplicable presences and historical omissions, which are supposedly carefully hidden for reasons of “various expediency”.

I found this book, now out of print and hard to find, after a lot of searching, and what it presents is really impressive. “Secret Athens and Attica” is a detailed exploration of the underworld of Athens, full of unprovable information, legends and traditions, as well as many inaccuracies that made the description of what should be invisible and hidden under our feet even more mystical.

Since they are hidden and difficult to access, when anyone can say whatever they want about them, I turned to Panagiotis Deuterios. He is an NTUA Civil Engineer and an ESE Speleologist, PhD in Ancient Underground Hydraulic Structures at the Department of Water and Environment of the NTUA School of Civil Engineering) and responsible for the Urban Speleology blog, having many years of experience in the study and research of underground Athens.

“Pure caving is an activity that occurs when visiting caves. Urban caving is an activity that takes place in the underground spaces of the city, not necessarily in caves, but mainly in artificial structures, underground tunnels, bunkers left after the war, and everything else “what could be there. And of course, a few caves,” he says. “I should point out that the term didn’t exist in Greece, ‘urban caving’ wasn’t used by anyone before we chose it as a title for our blog. Abroad, however, it has been used for years, and even for the same subject.” 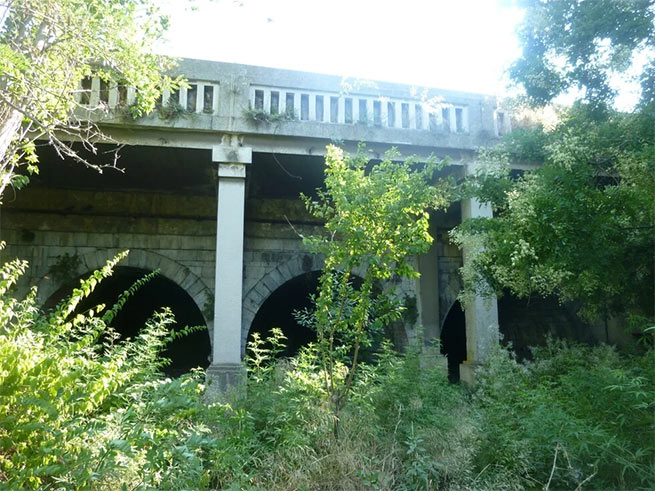 Underground Athens: an invisible (and real) city under the city of Ilisos Bridge, Ottonian, in Ag. Fotini. Photo: Panagiotis Deuteraios/urbanspeleology.blogspot.com.

Panagiotis has been engaged in this particular activity – the study of underground Athens – for eight years, and his blog has existed for four years. “My personal interest began when I read a book about a man who walked through the underground galleries of Athens, and I believed everything he wrote (ed.: he means the book of Yiannopoulos). I wanted to walk through them myself. Here and the rest of the kids in the group were interested, we wanted to know what he said there. Eventually we checked them one by one and found that most of what he says is not true. Usually there is an entrance and an exit, but no gallery that would connect them. That is, there are no mile-long tunnels in the city that connect all the places that he writes about, especially in the first chapter.

You may not be able to reach or visit many of them, but there are places you can easily walk down and kilometer-long tunnels that you can walk through, even near Syntagma Square or very close to the center. 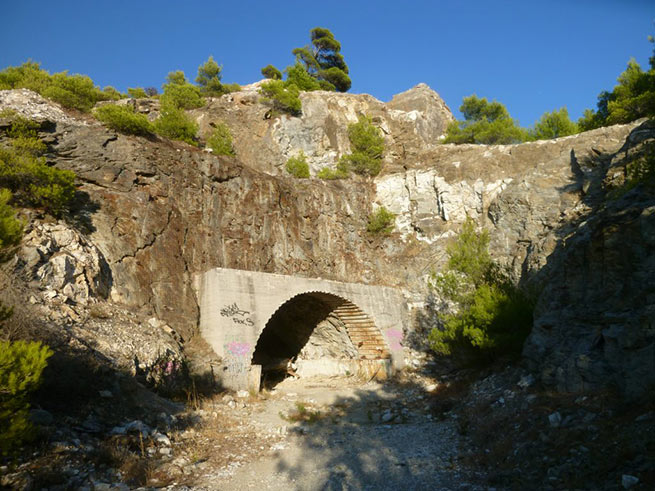 However, the underground city exists, it is a reality and a parallel world underground, consisting of underground galleries and underground streams, ancient aqueducts, shelters, sewers, catacombs and church ossuaries, large underground complexes of coal mines, caves and, of course, the recent metro network. Most of them start in the suburbs – sometimes in the countryside of Attica, far from the city, but also pass under the center of Athens.

Before he begins to uncover the points from which one can descend into underground galleries, tunnels of aqueducts, sewers and shelters, and begin the study, he makes it clear that “it must certainly be taken for granted that the routes are those where free access is possible – dangerous, and especially in covered streams-underground passages.They hide many dangers of slipping, falling and exposure to polluted water, insects and rodents (cockroaches, mice), risks associated with air quality inside the tunnels (very strong odors), with the presence of dangerous people who may find “shelter” in these underground tunnels, and finally there is a high risk of exposure to conditions that could lead to drowning if heavy rain suddenly falls during a visit.” These galleries, although some of them easily accessible, are mostly storm water drains (but not limited to) and flood protection structures, may be part of an alluvial system (where everything flows, including sewage) and are not built as personnel movement routes. or safe evacuation.” 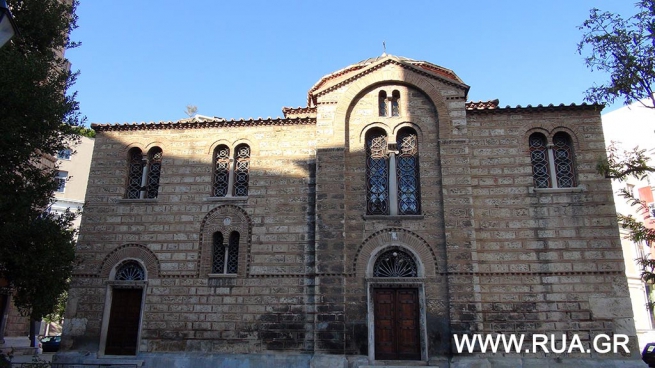 “The first place I explored was in the center, in Agia Fotini, near the Pillars of Olympian Zeus. Below it is the underground gallery of Ilisos and there is the old bridge of Otto, which, according to rumors, was the entrance to the underground galleries from Vatrachonisi (this is the name of this area ) in Faliro. It’s really just a bridge. There really is a tunnel under it, through which the river Ilisos flows, leading to Kallithea. But, once you get under the bridge, it turns out that it does not lead anywhere, except (theoretically) to some large concrete pipes. There is an underground space behind it, but in fact it is an old river bridge built under a modern road.” 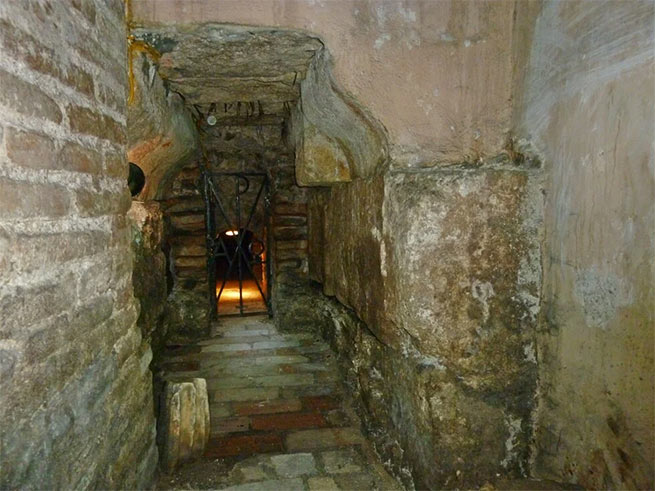 Underground church under the “Russian Church” in Athens.

Many have heard about the cellars of the Athenian churches, that they were connected by underground tunnels that could become escape routes leading outside the city. “The galleries in the church cellars were not connected to each other,” Panagiotis explains. “Usually there were some rooms under the church, ossuaries or catacombs that did not lead anywhere – each had something of its own. For example, Agia Dinami in Mitropoleos has very interesting story.”

When the revolution began, Athenian friends asked him to prepare gunpowder and fireworks for the Greek rebels. Thus during the day he slowly carried out the orders of the Turks, and at night he worked intensively for the Greeks.

Under the altar of the temple is a staircase that descends. At a depth of 15 meters there is a large underground space that looks like a cave. This room was used by the monks of the monastery during the years of struggle as a laboratory, where they made gunpowder, bullets and vials. Legend has it that they then transported ammunition through an underground gallery that starts from this room and ends somewhere in the area of ​​​​the modern Kesariani shooting range. There they were picked up by the villagers on mules and taken to the fighters, and the monks returned to their underground workshop.

“Under the Russian church there were Roman baths, which were later used as an underground space – we call them catacombs, but in fact they are not, people were not buried in them, this is not an underground cemetery. In the basement of the church you can see the remains of the columns of the Roman bell tower and antique columns. It is said that the crypt located here communicated with Otto’s palace and served the king as an evacuation route in the event of a siege (it connected the area with the Acropolis). 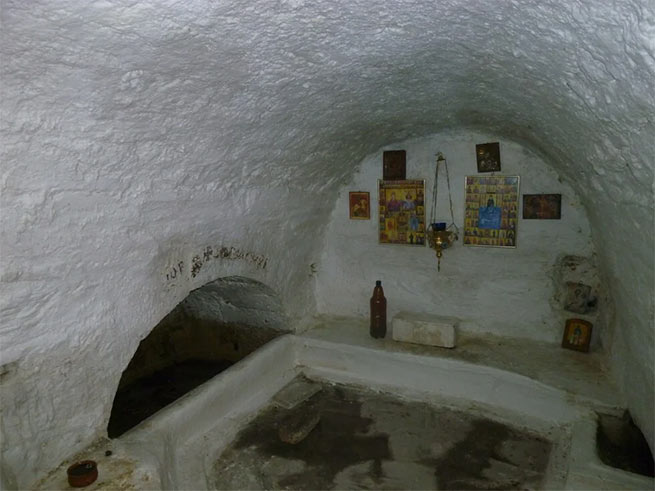 Underground Athens: the invisible (and real) city under the city. Holy water under the Holy Pantheon in Ampelokipi. Photo: Panagiotis Deuteraios.

“Some parts of the ancient Roman buildings survived, they were included in the basement of the church and formed a space that appeared in the form of sections as a result of excavations carried out in the 19th century by the then rector of the church, Archimandrite Antonin Kapustin,” says Panagiotis. “He found moisture in the backyard of the church and wanted to see where it came from.He was digging where there was water, and little by little buried chambers began to come to light, which they dug up, cleared, and gradually put together to create the space that exists today.

Some doors, passageways, skylights have been opened… It doesn’t seem to be connected to any other gallery, but there are some spaces that are now blocked off. If you look at the old plan that is in the book inside the temple, you will see that there were parts of the bath, as well as galleries of aqueducts and some tanks that you cannot enter today. Perhaps this space was connected with other places, but today we cannot be sure of this. The bath obviously received water from somewhere. There is a diagram created by Antonin Kapustin that shows the galleries found in this place, and they could continue on, going somewhere else. 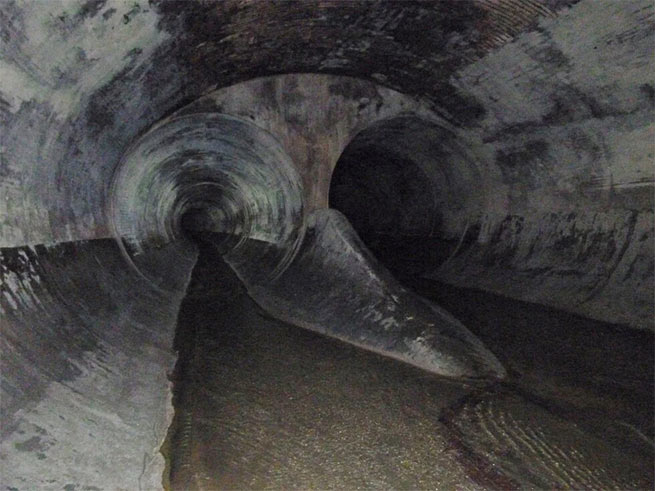 Underground Athens: the invisible (and real) city under the city. An inaccessible place in the depths of underground Ilisos. Photo: Panagiotis Deuteraios

The church of Agios Panthes in Ambelokipi has two small underground rooms. One of them is an ossuary, and the other is a sanctuary. Very close, of course, is the Hadrian’s Gallery (Hadrian’s Aqueduct), next to the Panathinaikos Stadium. The water that Adrianion had – and other aqueducts – did not come only from the springs of Parnita. Only a small part of it came from springs, but they were dug so deep that water from the earth dripped into the gallery. This is the so-called hydromastering, and you can see this today by going to the galleries, to see the stalactites created by him, and the water is still dripping into them. In many places it flows in large quantities, like underground springs.”