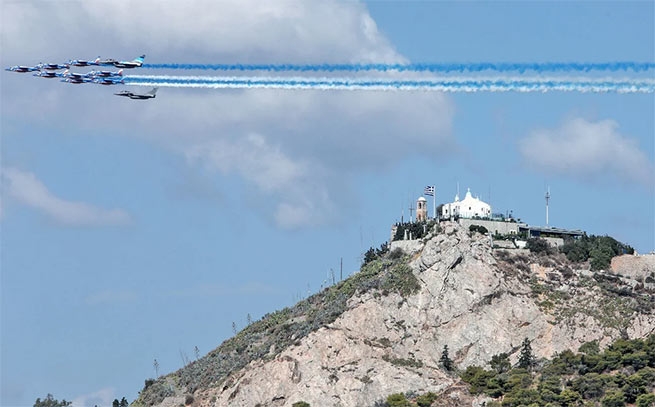 According to P. Podimatas, this year at Athens Flying Week the eyes of the audience will undoubtedly be riveted to the Rafale fighter. “This year the Rafale will be seen in flight by Greek and French crews, and we will also have the opportunity to see it on static display, – he said, – in addition, the public at the Athens Flight Week will have the opportunity to take pictures with Rafale, and at the Rafale International booth, where simulators will be installed, we will make a complete “x-ray” of the aircraft, and all visitors will be able to get the necessary information about this wonderful aircraft” .

This year is the year of the (cinematic) Maverick,” explains P. Podimatas, referring to the sequel to Top Gun, adding: “Initially, we could not hope that this magnificent aircraft, the F-18, would be able to take part in the Athens Flying Week 2022 flight demonstrations. However, the Swiss Air Force honored us by bringing it to Greece, because it is one thing to see it on a cinema screen, and another to experience it up close, feel its engine, hear it and enjoy it.”

Speaking of the numerous attendees at this year’s Athens Flying Week, Podimatas mentioned the Saudi Arabian Air Force’s F-15s, which he said “they will close the individual program of fighters from abroad”and also noted the participation of the Polish “Orlik” and the “Jordanian” flight group from Jordan, which “enrich this year’s program at the command level.”

“Both Saturday 17th and Sunday 18th September at Athens Flight Week we will have the opportunity to admire the Red Bull helicopter– added P. Podimatas and continued: – On Saturday 17 September, immediately after the helicopter demonstration, Red Bull planned to organize a pleasant party for the young people who will be on the site, creating a wonderful atmosphere”.

P. Podimatas did not fail to thank “Minister of National Defense Mr. Panagiotopoulos, Chief of the General Staff of National Defense General Floros and Heads of the Armed Forces for their support“. He noted that “This year the Athens Flying Week is co-organized by the region of Central Greece”by adding: “Many thanks to the governor of the region, Mr. Spanos, who, like all previous governors of the regions, understood the importance of thematic tourism. This year, guests even from Australia came to us.”

Speaking about thematic tourism, Podymatos said that “Athens Summer Week is an institution, part of thematic tourism, which supports 77 professions”, creating in the region “a very big event at a time when the tourist season closes”, and thus “we automatically extend it”.