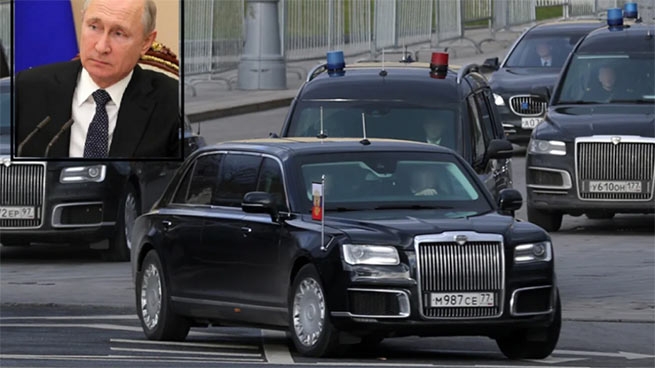 The Greek edition of EleftherosTypos, citing the British tabloid DailyMail, published the news about the attack on Putin’s motorcade.

DailyMail itself refers to the Telegram channel General SVR*, which, according to the publication, “often publishes ‘insider information’ about the Kremlin and Vladimir Putin.”

So, according to the channel, Putin was on the way and returning home on an unspecified day among the motorcade, amid deep fears for his safety. In particular, 5 cars participated in the procession, and the President of Russia rode in the third one.

“On the way to the residence, a few kilometers away, the first car of the procession was blocked by an ambulance, [и] the second escort car drove around them without stopping [из-за] a sudden obstacle to bypassing it.

In Putin’s car, “a loud bang was heard from under the left front wheel and thick smoke rose.” Putin’s car, “despite driving problems”, left the scene of the attack and arrived safely at the residence of the President of Russia.

About the General SVR channel. The channel is allegedly run by a former general of the SVR (Foreign Intelligence Service – author’s note), who took part in a huge number of special operations. According to the authors of the channel, the general has information that is not available to the public, and willingly shares it. The resource was actively promoted by political scientist Valery Solovey, who in many of his speeches referred to the materials of this Telegram channel.

Nightingale is known in Russia for his regular criticism of the authorities. He has repeatedly claimed that she practices occult rituals. In June 2019, the MGIMO leadership said goodbye to the professor because of his “anti-state propaganda and undermining political stability.” In 2021, the political scientist was detained in St. Petersburg and spent several days under arrest.

Main tasks channel, the administration of the resource determined the overthrow of power in the Russian Federation and the initiation of a trial of the current president of Russia. “General SVR” actively supports Navalny’s actions and subsequent protests. It is noted that in the publications of the TG channel there is campaigning and calls for action.

Among the versions of commentators on social networks, there is also a version about the involvement of journalist Dmitry Gordon in the channel, who himself actively promotes such “truth-tellers” on his information resources. In a recent publication of the channel, there was a hint of an assassination attempt being prepared on him. There is an assumption that Vladislav Surkov, who at the beginning of 2020 left the government of the Russian Federation and went on a free voyage, was also involved in the creation of the Telegram channel. In any case, none of these versions is confirmed. A person who communicates on the air may well turn out to be a figurehead. And the author of the channel can be both an insider who knows his business, and a plausible storyteller. According to editorial sources, the most likely beneficiary of the channel is, most likely, only one (or several) Western intelligence agencies.

And if everything is approximately clear with this TG channel, then the role of the once famous Greek publication is incomprehensible EleftherosTypos…