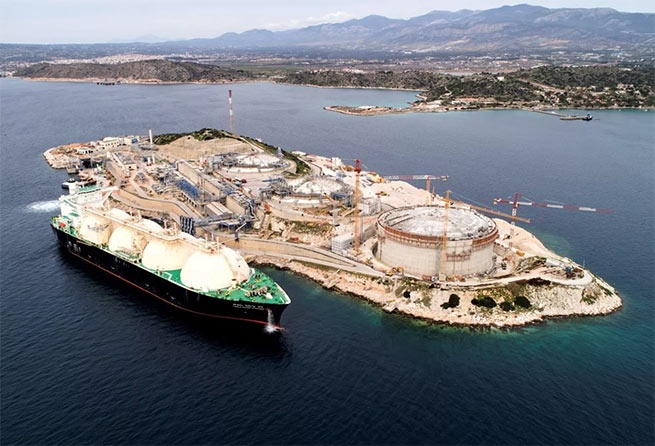 The LNG cargo of the Russian company Gazprom, bound for Greece from the Portovaya plant, has become the subject of discussion in the international press, where it is alleged that this the first cargo of LNG from a Russian company that will end up in the country EU.

Greek media reports that the identity of the buyer, as well as the volume of the cargo, were not disclosed, but Greece is the only country in the Balkans that has the LNG infrastructure to ensure the supply of natural gas both to the domestic market and to other neighboring countries such as Bulgaria and North Macedonia .

But what is the reality of this cargo and what is the current situation with Russian gas in any form, whether gasified by pipeline or liquefied on a ship?

First of all, it should be noted that currently there is no ban on the import of natural gas from Russia. Greece continues to receive Russian gas through the South Stream pipeline.

Secondly, with regard to Revitusa, at the moment, based on the planned deliveries of goods, there is no clarity that a cargo of Russian gas will arrive. In the next few days, 3 shipments are scheduled to arrive: one for ΔΕΠΑ recently acquired by the Italians from Algeria, one for the Mytilineos company and one for the Romanian company. Of course, this picture may change, but at the moment the arrival of Russian cargo is not planned.

Thirdly, with regard to LNG cargoes, during the course of the voyage they can change the buyer and destination several times, depending on the attractiveness of the cargo and its price. In this sense, if the shipment does not arrive at its destination, it is difficult to reason about the buyer.

Fourth, in recent months, at least two shipments of Russian gas have already arrived in Greece, processed by another trader, namely the French company Total, with Greek energy market companies as buyers.

Given this, sources in the energy market are commenting with some skepticism on publications in the international press regarding the Russian LNG cargo and talk about a game aimed at creating experiences without any substantive questions.

PS The situation on the EU market is more and more reminiscent of the story of Russian gas supplies to Ukraine, when gas was supposedly pumped to Slovakia and then returned to Ukraine from a “European supplier”. Gas, as it was, remained Russian, but its price increased by not the smallest percentage to intermediaries. At the same time, corruption openly flourished, as a result of which money generously settled in the accounts of government officials and politicians who lobbied for the “project”.

I have no doubt that the situation is similar in this case. During another offshore scandal (such as the recent Pandora Papers)it will be interesting to know how much the amounts in the accounts of European politicians have grown.

The only sad thing is that ordinary citizens of the European Union pay for all these frauds, to whom some government officials offer “adapt or die”…