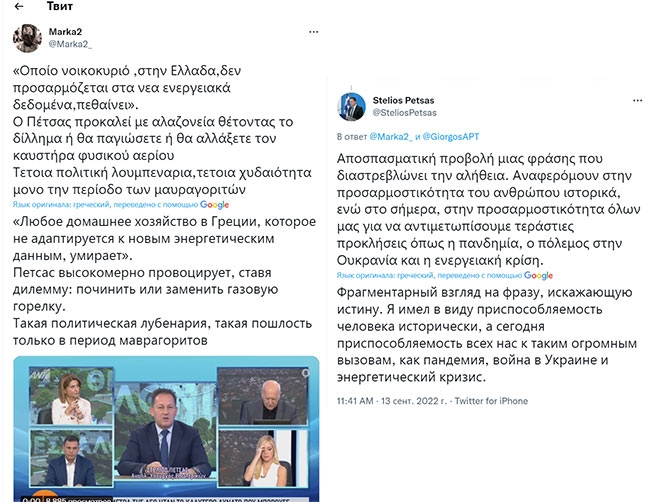 Social networks exploded with a wave of criticism and insults against the government of Kyriakos Mitsotakis after the statement of Deputy Interior Minister Stelios Petsas: “He who refuses to adapt, unfortunately, dies.”

On Tuesday morning on the morning air of ANT1 TV channel, S. Petsas declaredthat “he who refuses to adapt, unfortunately dies.” With this incredible argument, the Deputy Minister of the Interior called for a return to oil for heating, which caused an explosion of indignation.

This statement was the focus of Twitter users, which angered Stelios Petsas. He even argued with one of the users, accusing him of “distorting the truth.” In particular, Minister Kyriakos Mitsotakis spoke of “a fragmentary projection of a phrase that distorts the truth.”

“I meant human adaptability historically, and in the modern world I meant the adaptability of all of us to such huge challenges as the pandemic, the war in Ukraine and the energy crisis,” he said, prompting more angry comments about his cynical position.

How the opposition comments on the statement of S. Petsas

“Cynicism and arrogance are met with ridicule,” SYRIZA said in a statement regarding Stelios Petsas’ remarks. “The government is asking thousands of citizens to switch from gas to oil. To a simple journalistic question about whether the government will support transitional spending, Petsas cynically replied with the phrase: “who does not adapt, he dies,” SYRIZA said, in particular. adding that “now he comes to tell us that it was a ‘bad moment’ and at the same time talks about trying to misrepresent and exploit”.

The opposition comments that “cynicism and arrogance are met with ridicule” and emphasizes that “until he goes home, it is clear that this is not a mistake.” “In the face of a difficult winter, Mitsotakis’ line is: ‘he who does not adapt, he dies,'” concludes SYRIZA.

PASOK – The Movement for Change has taken a hard line on statements made by Deputy Interior Minister Stelios Petsas. “The government’s arrogant selfishness continues, and today Mr. Petsas took over. The unsuccessful – even after refutation – statement that everyone who does not adapt to the energy reality dies is evidence of political cynicism,” the press service said in a statement. parties.

PASOK – Movement for Change” points out that “energy policy, especially in this critical period, requires great seriousness and responsibility” and asks the government to adapt to the demands of the times.

“The Darwinism expressed by Mr. Petsas is also clothed in absurdity.”

“He who refuses to adapt dies,” Deputy Interior Minister Stelios Petsas, known for paying for positive media coverage during the pandemic, said cynically when speaking on a morning TV show about the government’s plans to subsidize the environmental regression from gas burners to oil burners.

If the government told us that it was going to subsidize, for example, heat pumps where there is no environmental load, we would consider it reasonable. If it told us that money from the Recovery Fund would be allocated for this purpose, we would also consider it reasonable. But for Mitsotakis Inc. it’s okay to subsidize what we previously subsidized in the opposite direction in order to ecologically “move” forward.

And when all this absurdity is dressed up in the form of Darwinism, expressed by Mr. Petsas this morning on Mr. Papadakis’s show, it becomes truly outrageous and inexcusable. We call on the government to stop mocking and insulting citizens, and to abandon these dangerous plans, which have nothing to do with the “green transition”, which the Prime Minister himself spoke about many times, but in the end we all see how much he “meant” it “.

There is a need for a real energy modernization with social criteria and 100% funding for the benefit of citizens, the environment and the national economy, as proposed by MPRA25.”

KKE: “Gentlemen of the government, you must pay the costs of any changes to the burners”

“Instead of taking significant measures to combat energy poverty, the government is urging the population to pay again to convert their home heating from gas to oil. All this in the name of an adjustment according to which “those who do not follow it die.” This is a monument cynicism and “social Darwinism” which, if anything, proves the necessity of political “death” of those who serve such policies and such views. Gentlemen of the government, you pay the costs of any changes in the boilers.”

PS On the pages of our publication, we have repeatedly appealed to the government of Kyriakos Mitsotakis with a request to teach officials and politicians to be silent. Let them keep silent, maybe they will pass for smart ones, because such statements, which are regularly made by functionaries, to put it mildly, do not benefit them.