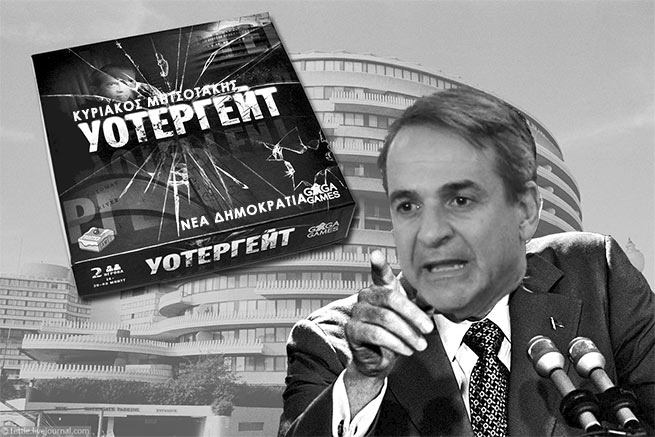 World media compare the story of the wiretapping of the opposition and journalists with the Watergate scandal in the United States: “The wiretapping scandal will not be forgotten, and will continue to haunt him.”

Almost all major Western media are opposed to the Mitsotakis government: Politico, with its today’s article entitled “Spy scandal overshadows the political future of Greece”, in fact, puts an end to the international political career of Mitsotakis.

The article presents the latest polls and scenarios of cooperation after the double elections, and also notes that there is concern in the ranks of the New Democracy on this issue, citing Kostas Karamanlis, Nikitas Kaklamanis and Kostas Tzavaras.

The publication compares the National Intelligence Service wiretapping scandal, which is politically overseen by the cabinet of Prime Minister Mitsotakis, to the Watergate scandal that brought down Nixon. It was exposed after the break-in of the Democratic National Committee (DNC) headquarters in the Watergate office complex in Washington, D.C., on June 17, 1972, and the cover-up and involvement of then-U.S. President Richard Nixon and his administration.

Doesn’t this remind you of anything?

When the conspiracy was uncovered and investigated by the US Congress, Nixon resisted the checks, leading to a constitutional crisis. The scandal led to the discovery of facts of abuse of power by members of the Nixon administration, the initiation of impeachment proceedings against the president, which ultimately led to his resignation.

The Politico article details everything: The spy scandal has changed the Greek political landscape, fueling doubts that the country will be able to form a stable government after the next elections.

The controversy began last month when the government admitted it tapped the phone of an opposition leader, a move it called legal but wrong. It then quickly escalated into a convoluted saga that included the installation of controversial spyware on the phones of an ever-widening network of politicians and journalists.

However, the public is divided over whether she wants to see Mitsotakis in power. Two recent polls showed that just over half of Greeks think the prime minister should step down. And with elections due in the next nine months, Mitsotakis’s potential partners are trying to attack. Looming over all of this is the possibility of new spy plots emerging. In recent weeks, new accusations have been constantly appearing in the Greek press.

The government admitted that it authorized the wiretapping of Nikos Androulakis, a member of the European Parliament who heads the third largest party in the Greek parliament, the centre-left PASOK. Following this, spyware known as Predator was found on Androulakis’s phone, as well as on the phones of a journalist and members of parliament from the opposition party, the radical left SYRIZA. The government denies any connection to these violations.

However, questions remain about what exactly happened. Mitsotakis declined to explain why his political opponent was spied on, citing national security concerns. The silence worries some New Democracy MPs.

“In such situations, catharsis only occurs when they are completely cleansed”– said Kostas Karamanlis, former prime minister of Greece and one-time head of New Democracy, during a recent party event in Crete. “The fact that these events were caused by a government initiative is not only undemocratic and illegal, but is so beyond the realm of morbid imagination and political delusion that it is simply unthinkable.”

Disappointment erupted in Parliament, where Nikitas Kaklamanis, a leading member of the New Democracy party and deputy speaker of parliament, said he now opposes a provision he and the ruling party have adopted that makes it impossible for citizens to know if they are under surveillance. Member of Parliament for New Democracy Konstantinos Tzavaras even called the Greek media a “shame” for not covering the scandal anymore.

“The functioning of the constitution has taken a serious hit and the prime minister needs to be on top,” said Tzavaras, one of the party’s spokesmen in the parliamentary inquiry into the matter.

Despite public reproaches, a full-scale uprising within the party remains unlikely – the number of disgruntled New Democracy officials has not increased in recent days. For some of the country’s political experts, Mitsotakis’ tenure is symptomatic of a dysfunction in the Greek political system. “If we were in any democratic state, we would not have such political instability“said Nikos Marantzidis, professor of political science at the University of Macedonia. “The prime minister would have resigned by now and elections would have been called.” “Mitsotakis”, says Marantzidis, “identifies his personal future with the future of democracy and the country when he says that if I resign, instability will come.”

Mitsotakis answertiled that thought on Sunday, saying: “The world knows us. If not us, then who?”.*

Look at the elections

Before the spy revelations, New Democracy and PASOK were thought to form a centrist coalition government after the upcoming elections. It’s finished. Right now it is very difficult for PASOK voters to move to New Democracy, but it is even more difficult for them to pressure their party leadership to join the coalition,” said Diamantopoulos, a Greek political expert at Panteion University.

Mitsotakis laid the blame for this on Androulakis himself, accusing him of playing a political game. I believe that what happened helped Andrulakis to follow the pre-planned line – to break with the “New Democracy”“, he said, claiming that the PASOK leader was in “disharmony” with his own constituents.

The next national elections in Greece will be held under a proportional representation system, making it nearly impossible for any party to win a majority of votes. In this regard, the country is likely to move to repeat elections, which will be held under a system that provides bonus seats to the first batch. However, current polls show that neither party is close to achieving an absolute majority, even with a bonus in the second round.

Prior to the espionage scandal, this reality fueled expectations that New Democracy and PASOK would be forced to form a coalition. Now, as the two parties squabble, speculation is in the air about what kind of coalition formations could emerge from such a split.

Mitsotakis may be linked to the nationalist, Russophile Hellenic Solution party. However, this would mean a shift for the prime minister, who describes himself as a moderate and pro-American politician. On Sunday, Mitsotakis said he did not feel “quite close” to a Greek solution, but did not rule out a possible unification, saying he was “not ready to talk about what the options would be” if a coalition was needed. He also left open the option of working with certain people from different political parties to strengthen his position.

Similarly, a grand coalition between New Democracy, PASOK and Syriza – an approach that favors PASOK – is likely to require new leadership in New Democracy. “It’s possible, but it won’t be easy,” said Marantzidis, a professor of political science. “As long as (Mitsotakis} identifies his personal future with that of democracy and the country, it will have a negative impact on post-election developments.”

Mitsotakis himself warned of another possibility – a coalition bringing together all the center-left and left-wing opposition parties to form a government, skipping New Democracy even if it finishes first. “It will be a political monster and I have to inform and warn people about this possibility,” Mitsotakis said.

“Obviously, the government’s strategy is to forget what’s going on,” Marantzidis said. “But,” he added, “one way or another, like Nixon, who did not escape the truth, Mitsotakis will not be able to escape it.”