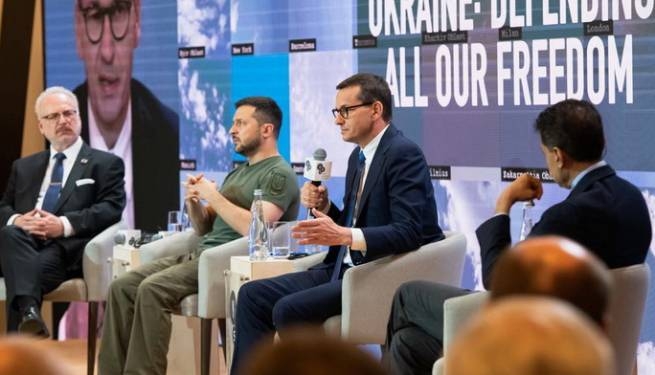 The 18th meeting of Yalta European Strategy was held in the Ukrainian capital against the backdrop of complete informational silence. What was discussed at the international forum?

The visits of Western leaders to Kyiv are no longer an extraordinary event, but something fundamentally new happened last Friday and Saturday. First, the unexpected visit of the Latvian president (which became known only thanks to photographs with Mateusz Morawiecki and Zelensky), who, contrary to security rules, stayed in the Ukrainian capital for the night. At the same time, the purpose of his Saturday part of the visit was not reported. As it turns out, there were good reasons for this.

In the mode of complete informational silence on Friday and Saturday in Kyiv, the 18th meeting of Yalta European Strategy, an international forum held annually by Victor Pinchuk Foundation. A strict rule was set for the participants – not to report either about the event itself or about the statements made at it. Although many of them are really important, as you can see below.

The main message that sounded from the lips of the Ukrainian president to Western partners, Eastern enemies and Ukrainian society was that Ukraine does not intend to start negotiations with the Russian Federation and calls on the West not to believe in any of Putin’s promises. Without specifying the addressee, however, it is clear that Zelensky was addressing the United States in response to a proposal he heard from Secretary of State Blinken a few days ago. It outraged official Kyiv.

Since 2014, the YES forum has been held in Kyiv, and not in Yalta, as it was before the occupation of Crimea by Russia. And every year its participants uttered a symbolic phrase: “Next year we will meet in the Crimea.” But every year it became more and more like an element of formality. This year, everything is perceived and happens differently.

In his speech, opening the forum, Zelensky addressed the audience:

“Now we are closer to Yalta than we have been at previous YES conferences in the last 8 years. I think you all have this feeling. And we have confidence in this.”

Undoubtedly, this phrase was associated with counteroffensive of the Armed Forces of Ukraine, which continues in the south and east. This topic ran like a bright red line through most of the speeches and discussions during the conference. However, Zelensky’s address to YES participants was primarily devoted to energy security – it is on this front that, in his opinion, the Russian aggression strategy will be focused this winter:

“The contours of Russia’s defeat will become clear after these 90 days. If we all endure. Although we have no doubt that we can get through the winter period without Russian energy resources – not only we, but all respected European states.”

Faith in effective agreements with modern Russia has disappeared for almost everyone. From the very beginning of the Russian invasion, one of the key signals of the Ukrainian authorities about the expected development of the war was the thesis that Ukraine, of course, strives for victory, but understands that at some stage it will have to negotiate with the Kremlin. The main signal then was the phrase: “Any war finally ends with a peace agreement.”

In an effort to start peace talks as early as possible, Zelensky has been looking for opportunities to meet with Putin face-to-face. Ukraine initiated several tracks of negotiations with the Russian Federation: at the level of negotiating groups in Belarus and subsequently in Istanbul; at the level of foreign ministers; then added “grain” track mediated by the UN. Later, Kyiv’s position became more rigid. And at the “presidential” YES panel discussion, everyone saw another Zelensky, says “EUROPEAN TRUTH”.

Even in the opening speech, the president emotionally addressed not those present, but to someone imaginary who is not in the hall – without naming a name or country:

We cannot afford to stop. This is my main signal to everyone who is thinking something somewhere, some even from the leaders, pushing us somewhere into someone’s extra arms. No. We can’t afford to stop! Until the moment when we feel that the victory has taken place.

The position of the Ukrainian president was supported by other participants in the discussion. About “peace negotiations”, “compromises” with Russia, about the need to negotiate, etc. During the speeches at the forum, none of the foreign guests, neither among the experts nor among the officials, said anything.

Egils Levits, for example, urged not to give in to Russian demands in any case, using the principles of “realpolitik”, a policy of compromise that has long been defining for key European countries. He is convinced that in the situation of Russian aggression, this approach is irrelevant:

“Realpolitik is a policy of capitulation. And it does not lead to a sustainable peace.”

And Vladimir Zelensky repeated that there is no point in negotiating with Russia now, because it will violate any agreements:

Later, however, at the Q&A session, the president nevertheless suggested that one day negotiations with Russia would become possible, but at the same time put forward the prerequisites for this, which sounded rather “vague”: “Russia should begin to recognize its crimes committed in Ukraine. Leave the occupied territories. They need to change their current status, become “just” our enemy. And they must leave the occupied lands. Moscow must recognize that the so-called “L/DNR” and Crimea are occupied. If they are not ready to recognize even the occupation territory of our state, there will be no dialogue.”

Who is this foreign leader urging Ukraine to negotiate with Putin? According to European Pravda, this is about Joe Biden, a message from which was brought to Kyiv this week by Anthony Blinken, who arrived on a sudden visit. It seems that the signal was not in the form of an ultimatum or demand, but as a recommendation. Victoria Nuland’s speech at YES also testifies to the absence of real pressure on Kyiv. She said softly that “all wars end with peace agreements” and stressed that Ukraine itself would choose the time of negotiations with the Russian Federation.

Defense Minister Oleksiy Reznikov, who closed the 2-day conference, also mentioned, without being specific, that Ukraine is being pressured into making an agreement with Russia:

“We (during the war) have learned a lot, including learning not to trust any talk about peace that our partners offer us. in order to continue to negotiate and negotiate, you must withdraw the troops as of February 23. Then it was possible, but now they have passed more than one point of no return, and this option has long been impossible. . On December 1, 1991. Go out”.

So the “Yalta” forum became the place where the seizure of Ukraine reigned. The courage, endurance and courage of the Armed Forces of Ukraine, the problems that await Ukraine after the end of the war were discussed at every panel. From time to time, someone reported about another liberated city or village in the Kharkiv region, and later optimistic news began to arrive from the Luhansk region and the Donetsk region.

The YES meeting was held in the underground hall of one of the Kyiv hotels, so in case of an alarm in Kyiv there was no need to evacuate from there, and it would be impossible to hear the siren underground. However, in the capital these days there were no missile attacks.

Foreign participants of the meeting convinced the Ukrainians that another threat – nuclear – is unrealistic. The same opinion is shared in the USA. It was American intelligence that actively warned Kyiv last year that Russia was preparing an attack. But Washington sees no reason to worry about nuclear weapons. Democratic Senator Jim Costa explained to the meeting participants:

“He (Putin) doesn’t need it. If he uses nuclear weapons, it won’t stop Ukrainian resistance, but it will further strengthen US support for Ukraine and further involve NATO in Russian resistance. Of course, Putin can use nuclear weapons irrationally, he already made a lot of mistakes. But until he goes crazy and dies of cancer, there is no reason to believe that he will do it now. Putin’s main weapon this winter will be energy.”

“We are preparing for Russia to strike at energy facilities. And we are ready to ensure that the winter is difficult, but stable.”

The forum confirmed the problem in the West’s perception of the war against Ukraine – that even pro-Ukrainian officials and experts sometimes do not understand that it is necessary not only to return their lands, but also to do it as quickly as possible. There are many who think that over time Ukraine will win and do not believe otherwise. British historian Niall Ferguson explains:

“They say that time is on Russia’s side. But if this were true and the empires waging war benefited from the passage of time, then the USSR would not have to leave Afghanistan.”

A few days ago, it seemed that Ukraine should make an effort to convince Western politicians and opinion leaders otherwise. But there is another way to solve this problem. It, simultaneously with the YES meeting, was demonstrated in the east by the Armed Forces of Ukraine. And this is the best argument that Ukraine can do much more than what is expected of it. In the situation in which Ukraine finds itself now, pressure on hasty “negotiations with Putin” is meaningless.

Speech by Volodymyr Zelenskyy at a closed YES meeting: