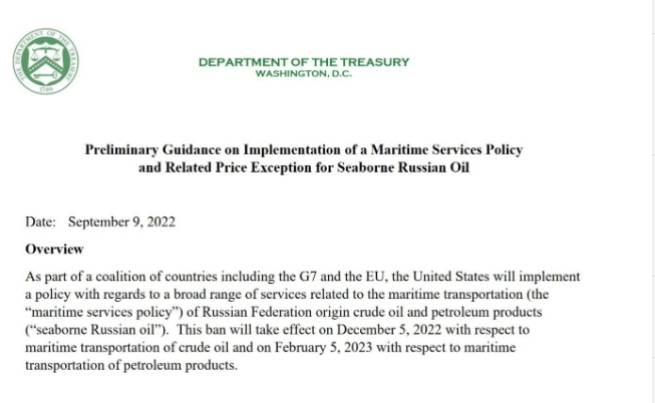 The United States, in coalition with the European Union and the G7, is imposing a ban on shipping Russian fossil oil and petroleum products. The ban will come into effect on December 5th.

On September 9, the US Department of the Treasury officially announced this by publishing a corresponding document.

The ban on the sea transportation of crude oil is introduced from December 5, 2022, and oil products – from February 5, 2023.

Earlier, the finance ministers of the G7 countries approved the introduction of a “ceiling” on prices for Russian oil. It will work from December 5, and for Russian oil products – from February 5 next year. The G7 statement also spoke about plans to ban sea transportation and insurance services for ships with Russian oil in the event that it is sold above a certain ceiling.

Thus, the West wants to cut Russia’s revenues while keeping enough oil on world markets to prevent a surge in already high prices. Russia, in turn, stated that will not deliver oil to countries that will introduce a price ceiling.