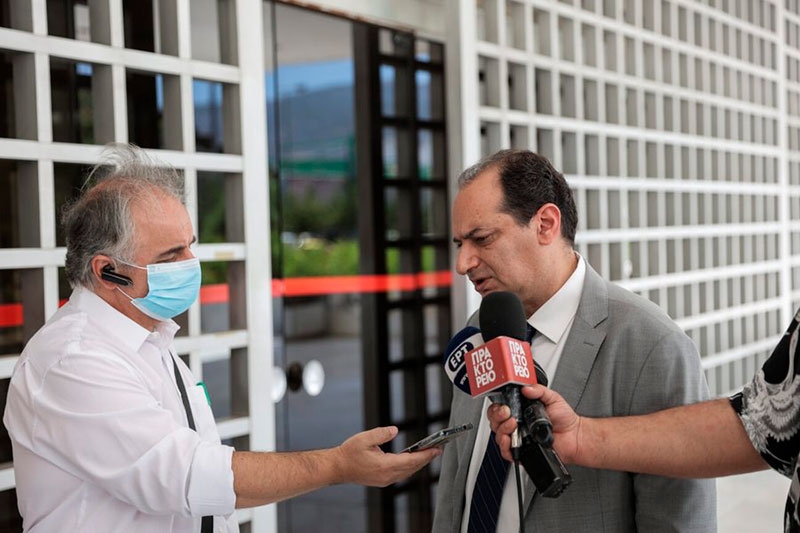 The wiretapping scandal in Greece reached a new level on Friday, when MP and former Citizens Protection Minister Christos Spirtzis (SYRIZA) filed a lawsuit in the country’s Supreme Court.
As it turned out, his phone, like that of PASOK leader Nikos Androulakis and journalist Thanassis Koukakis, was bugged with the Predator spyware. The deputy of parliament told journalists about it live.

On Friday morning, Spirtzis filed a lawsuit against all those responsible for a series of crimes, including the creation of a criminal organization. The lawsuit was filed with the Prosecutor of the Supreme Court, Arios Pagos.

The mobile phone was hacked and infected in 2021. The Predator malware infection occurred simultaneously with the surveillance of PASOK-KINAL leader Nikos Androulakis and journalist Thanassis Koukakis, Christos Spirtzis told reporters in statements after filing a claim.

The eavesdropping of an MP means that his conversations with all SYRIZA MPs and the leader of the main left-wing opposition, Alexis Tsipras, were intercepted by a third party, the information was collected and sent “appropriately” to those who were interested in what the opposition was doing and doing.

In a statement to reporters broadcast live on state-run ERT, Spirtzis said two SMS messages had been sent to his Predator-infected mobile phone. The second SMS was the same as the one that Thanasis Koukakis and Nikos Androulakis saw on their mobile phones, the deputy stressed.

He added that he had published a complaint about wiretapping by ΕΥΠ (National Intelligence Service) in a daily newspaper efimerida ton syntakton (EFSYN) November 13, 2021, and the second on November 15, after the newspaper’s revelations.

“On the same day, I received an SMS trap with Predator on my mobile phone, in which instead of efsyn.gr there was a link efsyn.news. Four days later I received a new message to block my mobile. It shows that some people desperately wanted to know what journalists and citizens I was talking to and apparently my conversations with SYRIZA President Alexis Tsipras about ΕΥΠ and the revelations that were made in those days,” Spirtzis said.

In response to a series of questions from Prime Minister Kyriakos Mitsotakis, who directly reports to the National Intelligence Service (ΕΥΠ) under Greek law immediately after coming to power in 2019, Spirtzis said: “Mr. Mitsotakis, did you listen to my conversations with SYRIZA President Alexis Tsipras? Did you listen to our thoughts, concerns and tactics? Did you hear and see the meetings we had in his office? Did you listen to my conversations with other heads of SYRIZA departments and deputies “Did you read the messages we exchanged? Did you watch the meetings we held in our party? Did you follow the meetings or communication that we had with journalists and MPs from other parties?”

“An attempt to listen to my mobile phone is related to my political activities and my institutional status head of the civil protection department in charge of ΕΥΠ issues”, — said Spirtzis. “I want to inform and emphasize that the second SMS is the same that was sent to Thanasis Koukakis and Nikos Androulakis. Which means they weren’t isolated cases of surveillance. Not for Koukakis, not for Androulakis. Three messages were sent from the same sick, sickly, anti-democratic and illegitimate center. This center is ΕΥΠ Mitsotakis, either directly or through third parties who have received their mandate. That is why I ask public questions,” said the MP from SYRIZA.

As an initial reaction, government spokesman Giannis Ikonomou, as reportedly called the Spircis revelations and lawsuit a “cheap spectacle,” just a day before the prime minister announces a new public support package for Thessaloniki International Fair.

Read more about the wiretapping scandal in Greece here.

PS No one contradicts the fact that the national intelligence service watches over the security of the country. But when the secret services turn into an element of the political struggle against the opposition, especially in matters relating to the ruling party’s ties to corruption (Novartis case), this is not just a violation of the criminal code and the constitution, it is the first reason for the resignation of politicians and officials who have discredited themselves. But, apparently, Mitsotakis and his team have their own point of view on this issue.

As it turned out, his phone, like that of PASOK leader Nikos Androulakis and journalist Thanassis Koukakis, was bugged with the Predator spyware. The deputy of parliament told journalists about it live.