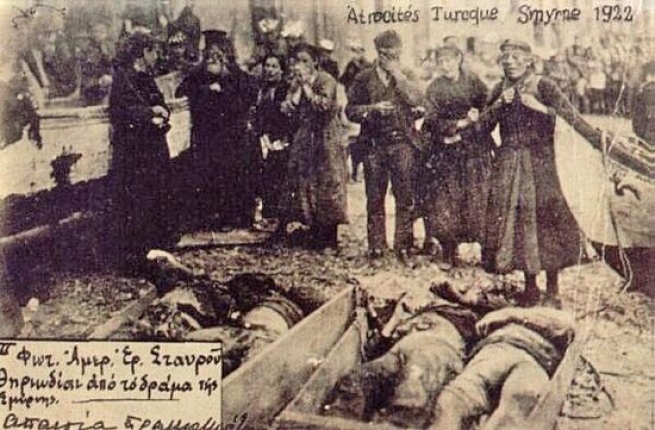 In these first autumn days, every year, thousands Greeks sadness appears in the eyes and the heart bleeds. The last mass pogrom of Greeks in Turkey on September 6-7, 1955 put a bloody end to 2.5 thousand years of the Greek history of this city.

72 years ago, already in the peaceful years after the end of World War II, thousands of Christian residents of Istanbul and Izmir, Greeks and Armenians, re-experienced the catastrophe of the 1920s.

Under the terms of the 1923 treaty that ended the Greco-Turkish war, Greece agreed to withdraw troops from Constantinople, Eastern Thrace and the Princes’ Islands, and Turkey agreed keep the Greek population there (Greeks were deported from the rest of Turkey). In turn, Greeceallowed Turks and Muslim Bulgarians to stay in Western Thrace (Orthodox Bulgarians were deported “to their historical homeland”).

However, the Turks were not inclined to adhere to this agreement all the time, and the Greeks were squeezed out of Istanbul in various ways. From the very beginning, the Christians of Istanbul were subjected to mass persecution by the new Turkish authorities. The Greeks were forbidden to engage in certain professions, their rights were limited.

In the spring of 1955, unrest began in what was then a British colony of Cyprus. Greek Cypriot activists demanded the independence of the island from the British crown and, as a logical consequence, unification with Greece. The British authorities invented and always adhered to the “divide and conquer” policy in relation to their colonies. The attention of Turkey, which until then had paid no attention to the neighboring island, was skillfully focused on the problems of the Turkish Cypriots. As a result, the Turkish authorities launched a campaign to incite national hatred, both in Cyprus and in their own country. 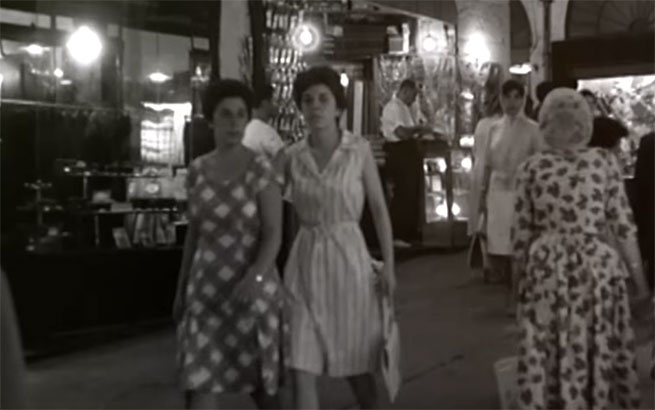 The streets of the Peri district before the pogrom

There was no special preparation for public opinion. After the genocide of the 1920s, those few Greek and Armenian families that remained in the territory of the former Ottoman Empire were able to rise again economically, rebuild houses, start their own business and achieve success, mainly in trade. Many quarters of Constantinople again began to resemble the good old days, as in the heyday of Christian commercial enterprises. Whether their Turkish neighbors, who did not achieve the same economic well-being, liked it is a rhetorical question. It is always easier to find someone to blame for your own trouble, especially if he is of a different nationality and religion. Therefore, it is not difficult to assume that there was no shortage of voluntary rioters. 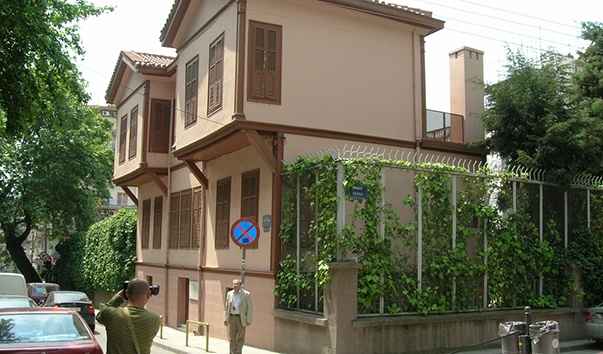 The reason was the explosion in the house-museum of Kemal Ataturk in Thessaloniki. As it turned out later, the blast was carried out by the museum caretaker himself with an explosive mechanism handed over to him by the Turkish special services. The Turkish media skillfully inflated the extent of the destruction of the home of the great Turkish leader, causing a storm of indignation in the Turkish public. The press of the times of President Bayar and Prime Minister Menderes presented a truly Turkish scenario of pogroms and vandalism. The Hurriyet newspaper, for example, wrote then: “We would like to remind our small neighbor – Greece, that unworthy children, if they do not take up their minds, are worthy of flogging. Needless to say, Turkish beatings are familiar to Greece.” Directly and frankly. 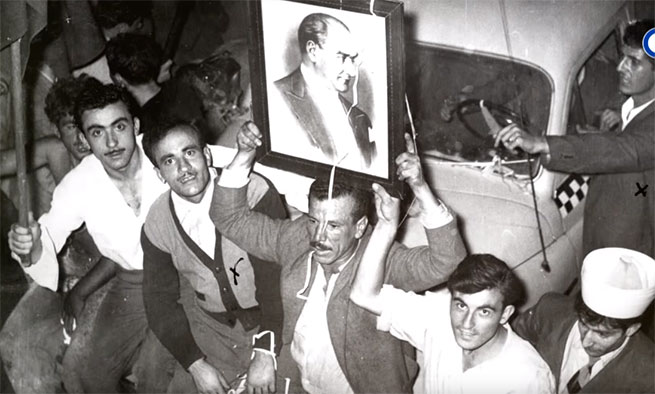 Crowd with portraits of Ataturk took to the street

The pogrom plan was just as simple. The previous night, houses, shops, and churches had been marked for desecration and destruction. The next night, more than 100 thousand pogromists, well organized, provided with transport, began to do their dirty work. About 80 churches, 4,500 shops, 2,500 apartments, 40 schools were affected. Christian cemeteries were desecrated, where the pogromists did not limit themselves to the destruction of tombstones, but also opened up the graves. Christian women and girls experienced terrible moral upheavals. The number of those killed is estimated at 37 people, but this figure is not absolute due to the impossibility of an accurate count. The material damage amounted to hundreds of millions of US dollars, according to some estimates – up to a billion dollars in the prices of that era!

How it all happened

The five main roads leading to Taksim Square were filled with crowds of people who were armed with sticks, axes, shovels, hammers and iron crowbars. The crowd chanted “Kahrolsun giavourlar!” (Damn the infidels!) and “Yikin, Kirin, giavourdur! “(destroy, break, these are infidels!). The police and army did not take any action, as they received absolutely no command to restore order and limited themselves to impassive observation of events.

When about 50,000 people had gathered, the next stage of the plan came into force: the destruction of all the property of the Greeks and the desecration of all the sacred places of the Holy City of Hellenism. The leaders of the rioters were instructed not to leave anything of value behind. 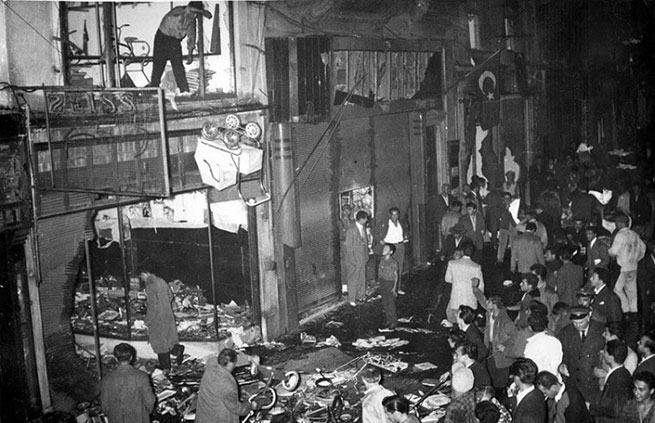 Part of the crowd moved to the area of ​​Istiklal Kadessi, also known as Pera, which was considered the most famous commercial center of Constantinople. There were about 700 shops in the area, the vast majority of them belonged to the Greeks. 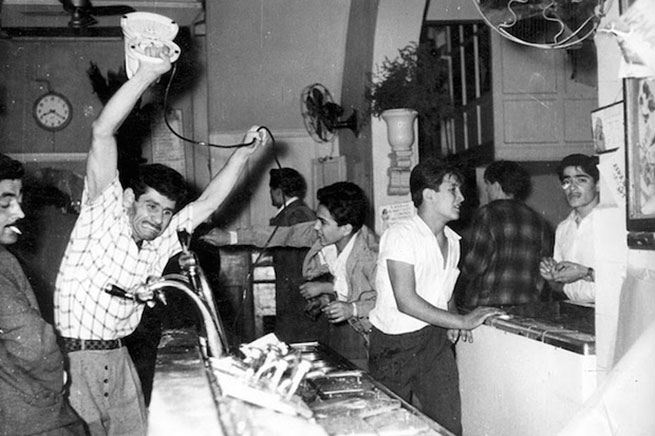 The first store to be attacked was the Eptalofos cafe in Taksim Square. The crowd burst into the cafe like a herd of rabid bulls. destroying everything that caught their eye: windows, tables, chairs, sideboards, glasses, cups.

Then they attacked a fabric store owned by the Greeks. Four rioters used a tram rail to break down the door and smash the shop windows. A few minutes later, the crowd rushed inside and began throwing fabrics, shelves, and other goods into the street. The sewing machine was smashed with the same tram rail on the street in front of a screaming crowd. The next target of the rioters was an electrical goods store, the contents of which were scattered all over the street. 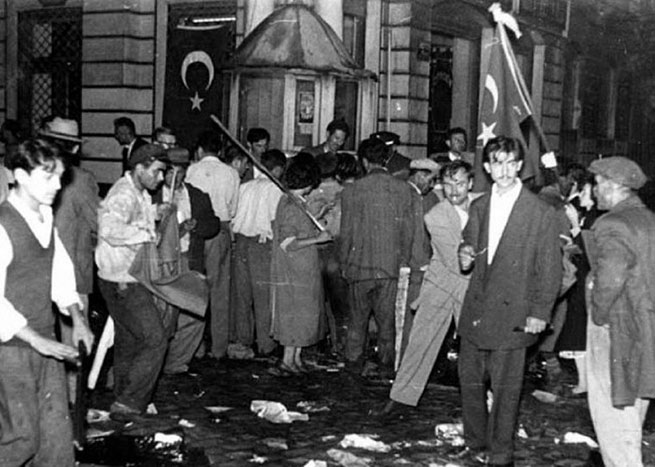 A little further on was a grocery store, at the entrance of which stood an elderly Greek. 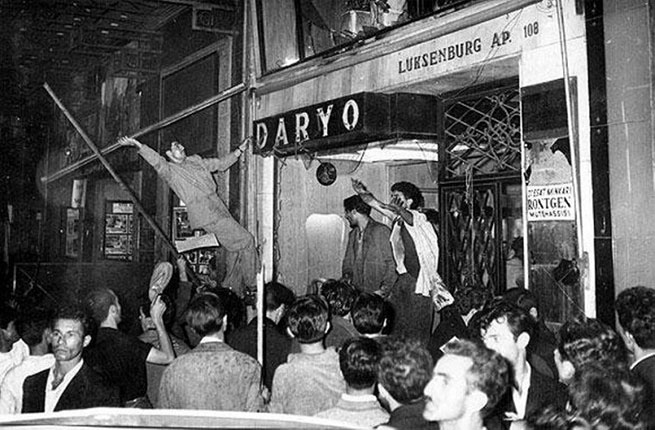 The crowd rushed at him, a few minutes later the store was destroyed, and the old man became the first victim of this nightmarish night. His wife survived by hiding in a corner, but died soon after from the shock of that night.

Likewise, the mob continued on its way, one by one destroying all the shops in the Pera area. The famous confectionery “Kervan” by Dimitri Pilavidi, “Baile” from Lethe and Kiripsi “Eskisehir” by Yannis Tsuli… 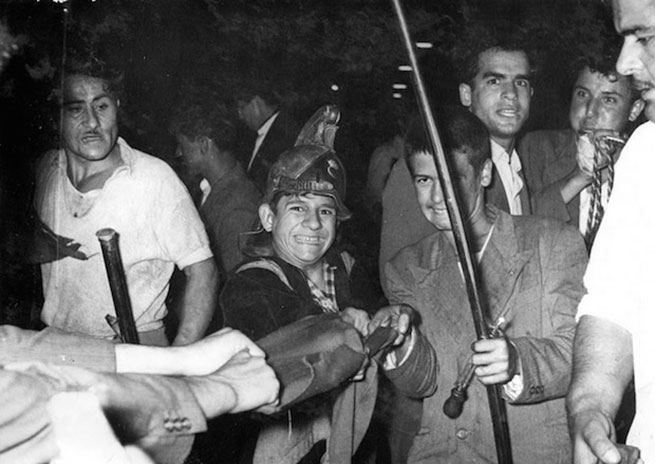 In large and luxurious stores, the rioters took silk shirts, suits, new shoes and put them on before continuing their destructive work.

In the famous Frangulis jewelry store, a mob of rioters staged a real fight among themselves in order to capture the most valuable jewelry. 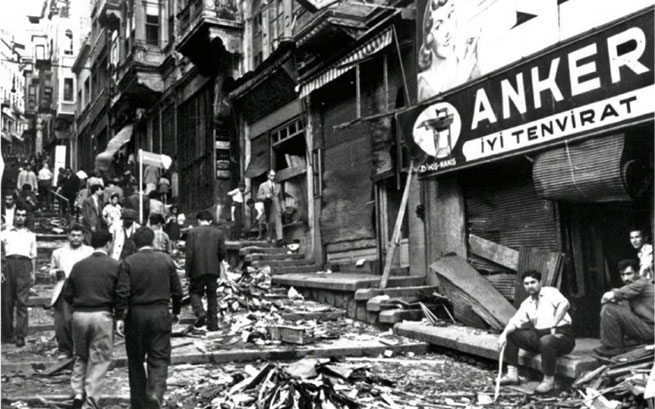 When the crowd arrived at the Church of the Holy Trinity, she hesitated for a moment. But the uncertainty was overcome when shouts of “Damn the infidels!” and then the Turks broke into the church. All property of the church was destroyed and desecrated. 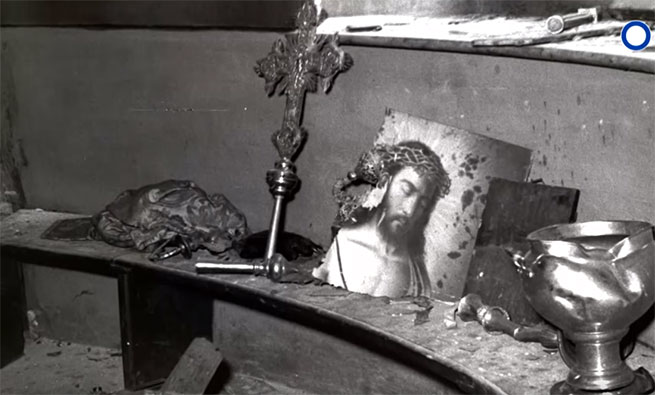 Icons, sacred vessels, priestly robes were the targets of the insane crowd. The pews and altar of the church were destroyed when a new group of rioters broke into the church with containers of gasoline to burn the temple. 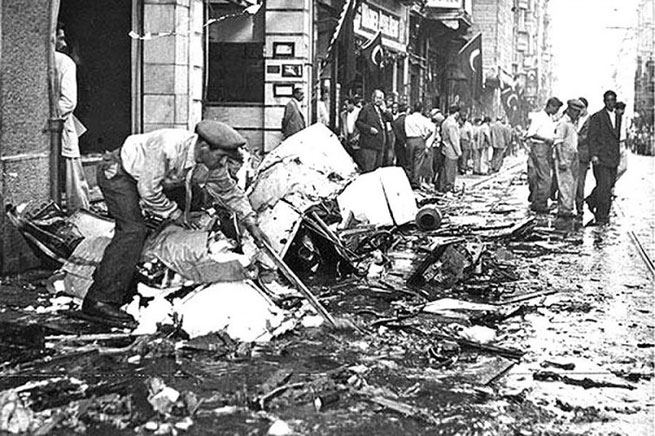 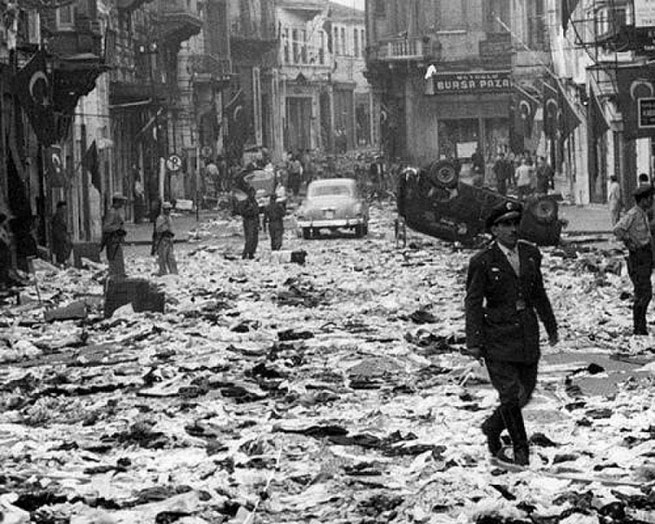 The area of ​​Pera changed drastically within a few hours. The streets became like a kind of substrate, which was a mixture of things that were destroyed: cars, furs, watches, shoes, oils, cheeses, textiles, dishes, clothes, various types of food and clothing, mixed under the feet of the crowd.

After that night, the vast majority of Greek and Armenian families left Turkey forever. A new, yet another exodus of Christians from Constantinople – how many there have been since Black Tuesday, 1453! 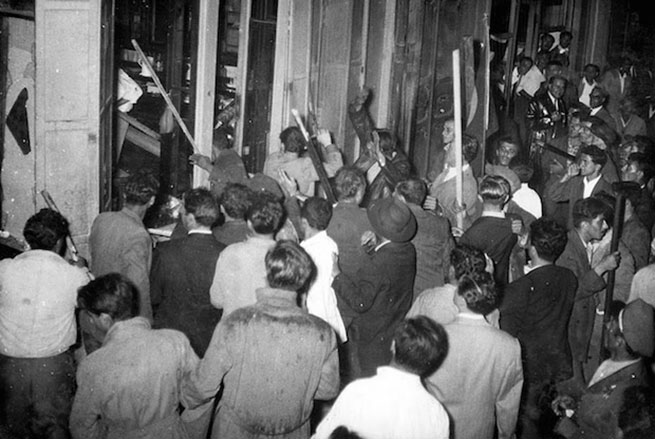 Of the 140,000 Greeks who lived in Istanbul in the mid-20th century, only a few thousand remained, and new repatriates appeared in Greece. Where is the Lausanne Agreement of 1923, which enshrines the right of residence in Istanbul of the Greek community? Apparently, in the same place as the right to self-government of the Greek communities on the islands of Imvros and Tenedos. 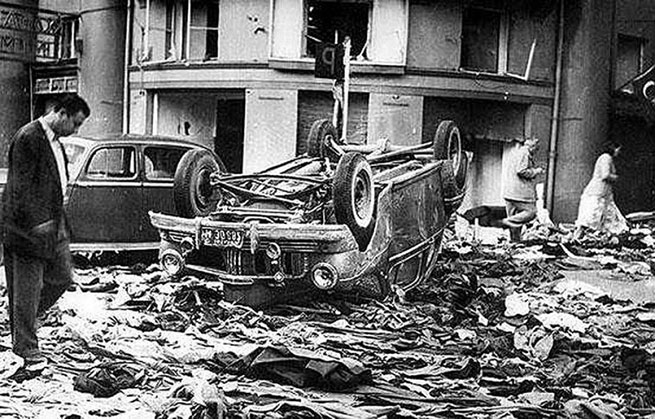 The fury of the rioters was out of control, and the intervention of the army on the morning of September 7 was needed. The riots also affected other cities in Turkey, primarily Izmir, where the families of Greek officers who were at NATO headquarters in the city suffered. At the same time, NATO troops stationed in Izmir, as well as the Western European public, preferred not to interfere in the events. 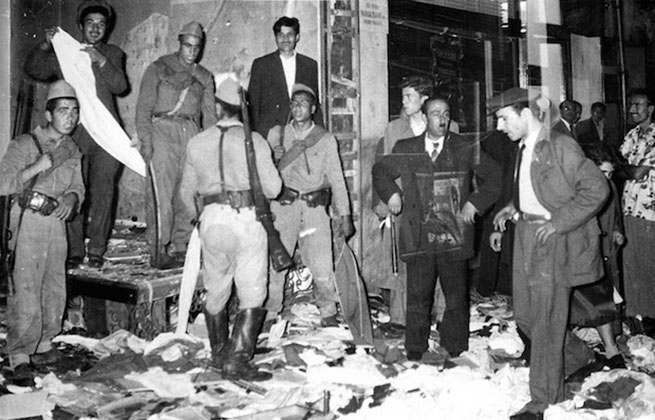 In 2000, only 2,000 Greeks lived in Istanbul. The princes’ islands (Imbros (Gökçeada) and Tenedos (Bozcaada)) were soon after the pogrom of 1955 settled by the Turks, and there, respectively, 250 and 25 native Greek inhabitants remained, and the use of Greek in school and administration was prohibited and schools were closed since 1975 of the year. 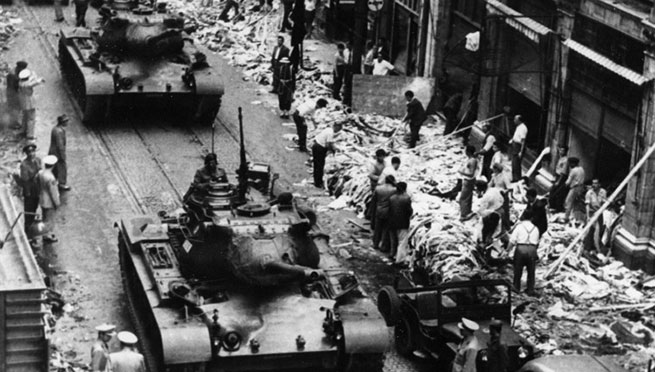 The progressive citizens of Turkey, however, do not forget the shameful pages of their history. On September 7, 2007, the Turkish newspaper “Sabah” published an article by Ergun Babakhan, dedicated to the events of half a century ago. The Turkish journalist writes with bitterness about the crimes of the Turkish government against its citizens – “the great city has lost its colors, lost its voice” – and correlates historical lessons with the current situation in the country, when the problem of Islamization and the Kurdish minority is acute in modern Turkish society. 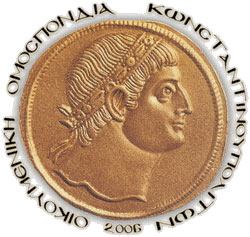 In 2006, the Ecumenical Federation of Residents was founded Constantinople for the joint solution of the problems of 26 societies of Constantinople, located both in Greece and abroad. The goal of creating the federation was proclaimed to unite efforts to support the Patriarchate in Fanari, compatriots who still remained in Constantinople, and, of course, to preserve and pass on the culture of Constantinople to the younger generation.

Now Turkey is raising the issue of paying war reparations under the Lausanne Treaty of 1923. And who will return thousands of lives of the Greeks of Constantinople, Cyprus (war of 1974)?

When creating the article, materials from sites were used greecetoday.com and site pontos-news.