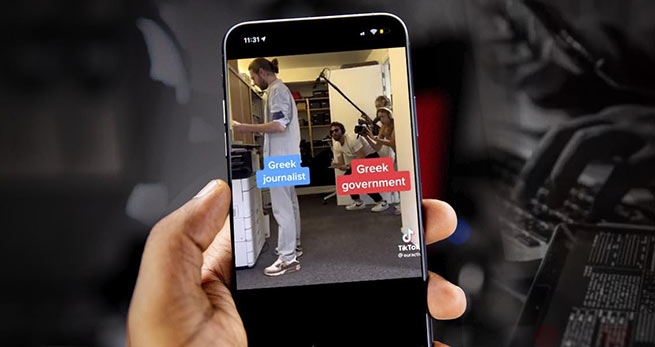 In a humorous and poignant video, Euractiv satirically pokes fun at the Mitsotakis government for wiretapping journalists and the opposition, showing a country where members of the press are even watched in the toilet.

A video filmed at the workplaces of Greek journalists shows how they are under constant and intense government scrutiny. When they write their lyrics, when they organize their information, when they talk to opposition leaders and even when they take a break to go to the bathroom.

The video is a blow to the reputation of the Mitsotakis government, during which freedom of the press in Greece fell to 108th, far behind many African countries.

After it was revealed today that the phone of former SYRIZA Minister Christos Spirtzis was tapped in exactly the same way as the phones of Nikos Androulakis and Thanasis Koukakis, MEP Sophie in ‘t Veld and chairperson of the PEGA Committee wittily and scathingly commented on her Twitter: “Another case Greek opposition politician whose phone was tapped with the Predator program. This may not be the last revelation. The cover is open.”

And when she says “lid”, she clearly means the political “sewage”.

Yet another case of a Greek (opposition) politician targeted with #Predators spyware. This will likely not be the last revelation. The lid is off. @EP_PegaInquiry https://t.co/fT8iK361vG