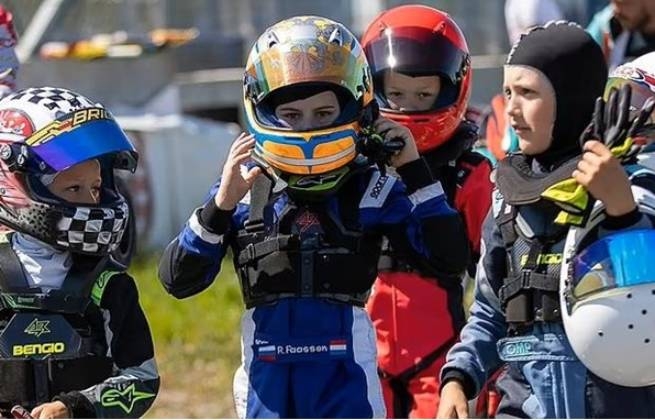 The ten-year-old grandson of the Russian president, the son of Putin’s eldest daughter Maria Vorontsova, first appeared in the media – on the pages of the Daily Mail.

The reason was his participation in the karting championship in the Crimea, but the event was postponed from August 9 to a later date and will be held elsewhere on September 9, due to security concerns, the publication reported. Noting at the same time the emergence of fears that the child could allegedly be killed. The photo shows the red, white and blue flags of Russia and the Netherlands on Roman’s belt. His map displays the name of the Russian Federation.

The grandson of the President of Russia is now 28th in the mini class at the Russian Karting Championship. This is the son of 37-year-old Maria Vorontsova from her first marriage to the Dutch businessman Jorrit Faassen, the son of a colonel in the Dutch army. US introduced sanctions against daughters Putin – Ekaterina Tikhonova and Maria Vorontsova – whom he never spoke about publicly. Putin refuses to talk about his family members, but admitted in 2017:

“I have grandchildren. They live a normal life… I want them to grow up to be normal people. If I mention ages and names, they will be identified and never left alone.”

Last month, Crimea was attacked for the first time since Russia’s invasion of Ukraine. Due to a major blow to the military airfield in Saki, the karting championship was moved from the resort of Evpatoria to Chechnya, writes Daily Mail. Roman, representing Moscow at the competitions, has already raced five times this season in the capital of Chechnya, Grozny, Zelenograd, twice in Ryazan, and also in the village of Bogatye Saby near Kazan.