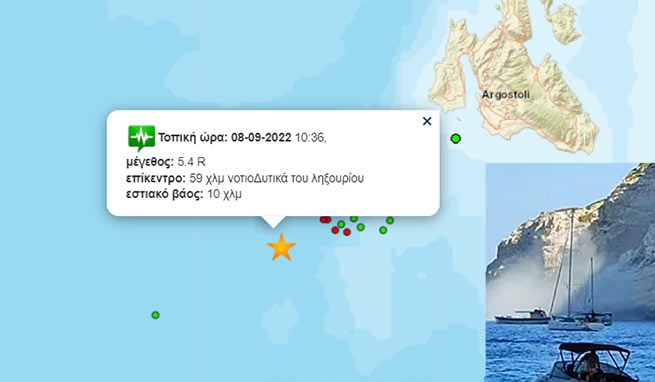 An earthquake measuring 5.4 on the Richter scale between the islands of Zakynthos and Kefalonia in the Ionian Sea caused a landslide and rock collapse on the famous beach of Navagio.

Aftershocks happened at 10:36 am on Thursday 70 km west of Zakynthos and 57 km southwest of Lixouri in Kefalonia. The depth of the focus of the main shock was 11.6 km. According to eyewitnesses, the main shock was “strong and prolonged”. In addition to the main shock, about 10 smaller ones occurred in the area, with a magnitude of up to 3.7 points.

In Zakynthos, an earthquake caused a small landslide on the famous beach of Navagio, access to which has been temporarily disabled.

Unlike the collapse of 2018 (pictured above), this time a small piece of rock fell. Which, however, seriously scared the tourists.

Life on Kefalonia goes on

The inhabitants of the island were scared, but the earthquake did not cause any damage or problems. “Probably Kefalonia is accustomed to such manifestations of the elements, no problems arose either in the city or in public utilities. Everything is fine,” said Argostoli Mayor Michalatos Theophilos in an interview with newsit.gr. “We were a little scared, but we didn’t have any problems. No damage, no reported problems. Life continues as usual,” he said.

“We were shaking, especially the earthquake was noticeable near our area. This worried us a little, ”said for his part, referring to newsit.grMayor of Lixouri Giorgos Katsivelis. “So far, no damage has been reported. We have our teams, we are also in contact with the communities, we have no problems at the moment,” he added.

Papazachos about the earthquake in Kefalonia: it does not cause concern

Speaking to newsit.gr, Konstantinos Papazakos, a professor of geophysics and director of the AUTH lab, seemed to reassure. “The final magnitude of the earthquake is 5.4 on the Richter scale and not of much concern“, – said Mr. Papazachos, adding that “this earthquake occurred far from Kefalonia, 60 km southwest of Lixouri, and about 12 km depth of its source.”

As the professor of geophysics explained, “For the Kefalonia fault, this is a common earthquake, and it is located at a great distance from the coast. This fracture is largest in EuropeAs for his movement, it is quite typical. From Lefkada to Kefalonia this fault has constant activity because it is the fault with the largest displacement in the Greek area. We shouldn’t attach too much importance.”

Kostas Papazachos speaks of “a transversal fault that has specific characteristics” and states that “there is no settlement above the epicenter, so we are especially interested in the depth of the earthquake. If it were right under Kefalonia, it would be dangerous.”