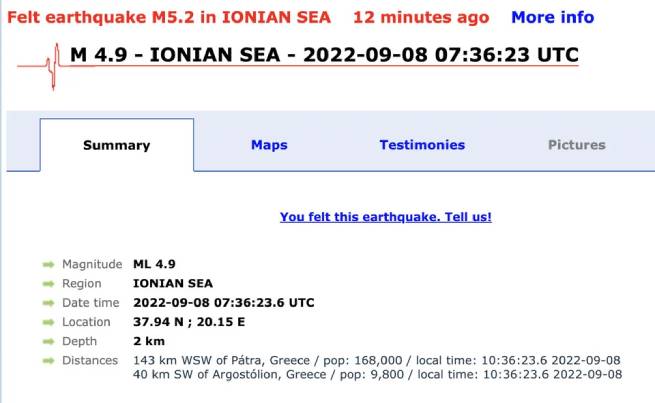 An earthquake measuring 5.4 on the Richter scale was recorded in the maritime zone between Zakynthos and Kefalonia at 10:36 am on Thursday September 8, according to the Geodynamic Institute of the National Observatory of Athens.

The earthquake occurred at a distance of 332 kilometers west of Athens. The epicenter of the tremors is located in the sea, 57 kilometers southwest of the city of Lixouri.

Initially, the Institute of Geodynamics gave an estimate of the magnitude of the earthquake at 5.3 on the Richter scale, but soon it was revised to 5.4.

In the comments of the local media in Zakynthos, there were reports that the earthquake was also felt in Lefkada. As Efthymios Lekkas, professor of geology and president of ΟΑΣΠ, stated on the website iefimerida.gr, the seismic vibration was felt at a fairly large distance. However, there is no particular problem (no need to worry).