Culture Minister Lina Mendoni said at a press conference on Wednesday that more than 300,000 archaeological artifacts have been discovered during the construction of the Thessaloniki metro system. Many of them will be on display at several metro stations, turning them into museums as well.

She added that most of these artifacts will be exhibited in two new museums to be built in the city.

Archaeological finds were brought to the surface during work at 6 of the 12 main stations of the Thessaloniki metro project: Agia Sophia, Venizelou, Sintrivani, Panepistimio, Fleming and Amaxostasio Plakas.

The archaeological work, which Mendoni said cost 169 million euros, unearthed finds dating back to Hellenistic times that reflect the development of the city’s urban structure, she added.

Among the finds are a rare 6th-century marble square, a statue of Venus, as well as “secret diamonds” of early Christianity.

The largest archaeological site will be at Venizelos station. 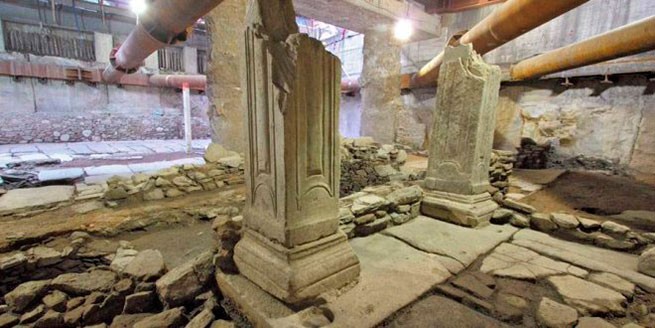 Another museum will be created in front of the Library of Thessaloniki University with an area of ​​5000 sq.m. There will be placed a section of the decumanus, 77 meters long, an east-west oriented Roman road departing from Hagia Sophia station.

The removal of the antiquities was completed on July 31, 2022, and their movement is scheduled to begin during the first quarter of 2023.

The removal of artifacts caused outrage among some of the local population. The government hopes that the Thessaloniki metro will still be operational in 2023, more than 17 years after construction began.