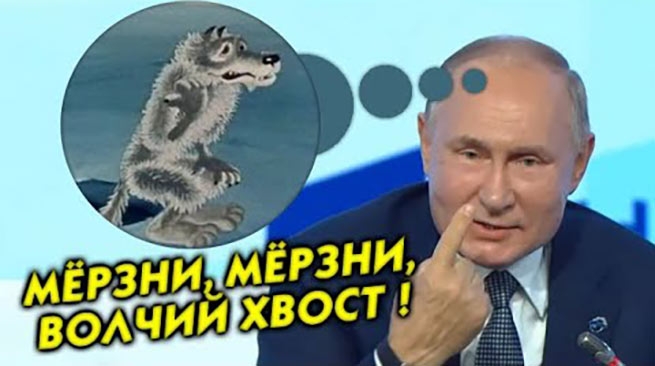 Vladimir Putin, once again turned to fairy tales and sayings to characterize the situation that has developed after the countries EU. decided to limit the price of energy for delivered from Russia.

Speaking at the Eastern Economic Forum on Wednesday, Putin noted that Russia is ready to fulfill its contractual obligations in full, but is not ready to submit to pressure and agree to conditions that are contrary to the contract and unfavorable for it. In this case, Russia will refuse to supply energy resources, the president said.

“But if someone tries to impose something on us, I want to note that those who impose something on us are not in the position to dictate their will to us. Let them think <...>. And we have only one thing left : how to say “freeze, freeze, wolf tail” in a famous Russian fairy tale, – the agency quotes the head of the Russian Federation TASS.

When asked who he meant by Volk, Putin replied: “The wolf is the one who lowered his tail into the hole in the winter and tries to catch a fish there, in this case in troubled waters..

This is not the first time Putin has introduced this story from Russian folklore to European counterparties. Even before the current spiral of strained relations with the West, last October at the Valdai Forum, he said that attempts to limit Russia’s work in the global and European energy markets would not lead to anything good. At the same time, the president quoted for the first time an episode from a fairy tale, when a fox tricks a wolf into catching fish with its tail in winter, and she herself says: “Cold, freeze the wolf’s tail.” “Now, if the Europeans follow this path, they will feel like these famous characters in a Russian fairy tale,” Putin told the Valdai Club participants.

On September 2 of this year, the G7 countries agreed to introduce a ceiling on the price at which Russian oil is purchased. This means that companies will refuse to insure and provide financial support for tankers with Russian oil if it costs above the agreed level. The finance ministers of the G7 countries did not determine its size in the final communiqué, but it is planned to be established simultaneously with the introduction of EU sanctions on Russian oil, which should come into force on December 5.

Representatives of the G7 countries explained that the restrictions were designed to reduce Russia’s income and its ability to finance military operations in Ukraine, as well as to reduce their impact on rising global energy prices, the G7 joint statement said.

In addition, the EU also decided to introduce a price ceiling for Russian gas. At the beginning of September, the President of the European Commission Ursula von der Leyen saidthat such a measure would be proposed at the European level. She noted that the EU countries managed to fill the storage facilities with gas by 80% even earlier than planned.

The press secretary of the President of Russia Dmitry Peskov, commenting on this possibility, called the price ceiling a subject of discussion for the G7 countries and Gazprom. Deputy Prime Minister Alexander Novak said that if a price ceiling were introduced, Russia would stop oil supplies.