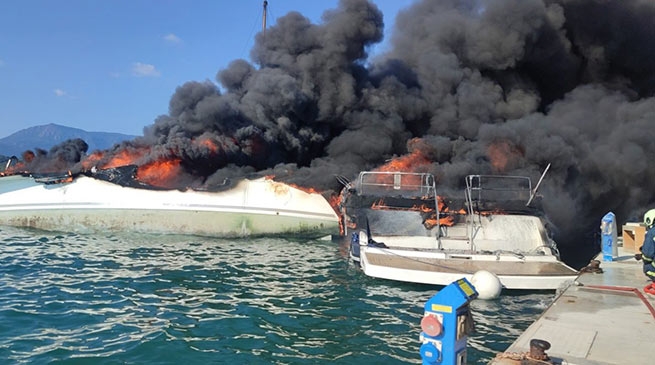 Four yachts were engulfed in flames when a fire broke out in the harbor of Gouvia on the island of Corfu on Wednesday, shortly after 4 p.m., the fire brigade said.

The fire quickly spread from the 20-meter sailboat to nearby boats in a matter of seconds. According to local mass media the area is shrouded in thick black smoke, explosions are heard.

Firefighters are trying to remove the ships so that the flames do not spread further.

State broadcaster ERT reported at 6:15 pm that three plastic-hulled yachts had sunk, and a wooden-hulled yacht built in 1929 was still on fire but afloat.

The cause of the fire on the ship is still unknown. reported that fire investigators arrived at the scene.

Luckily for yacht owners, the fire started at the edge of the pier, not in the center, where dozens of sailboats were anchored, notes ERT.

There were no reports of casualties as no one was on the four sailboats, ERT added.

Marina Gouvia is one of the largest in Greece and can accommodate up to 960 vessels on fixed and floating berths.