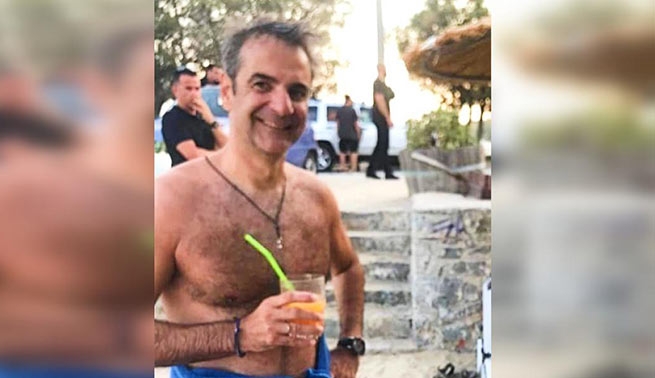 Despite the threat of resignation due to the wiretapping scandal and the energy crisis, Greek Prime Minister Mitsotakis has fun and takes a selfie in a tavern (video).

The wiretapping scandal shook Greek society, threatening to destroy what was left of shaky democratic institutions. But that doesn’t seem to bother Prime Minister Kyriakos Mitsotakis, who is once again enjoying his vacation and taking selfie photos with unearthly creatures, apparently to show the Greek voter how “cool” he is.

As the citizens of Greece face an unprecedented “wave” of austerity and do not know what the coming winter will turn out to be due to Western sanctions against Russia, Prime Minister Kyriakos Mitsotakis continues his summer holidays without a care and continues to cultivate the image of the people’s beloved “great helmsman “.

Perhaps he did not understand the scale of the wiretapping scandal, for which Greece and his government are daily vilified by the international media, and clearly does not understand the anxiety of the Greek people for the upcoming difficult winter, continuing his “excursions” in September, enjoying the sun and the sea…

“That’s why people call him #Κουλη. Irresponsible, dangerous, carefree person who doesn’t care”occupational“The winter that he will “give” to the Greeks. He boasts without shame about his abilities, like any mu*ak…”commentators write in social networks.

PS It is worth paying tribute to the indifference of Kyriakos Mitsotakis. Few in such a situation could be so carefree. However, not everyone considers this normal.