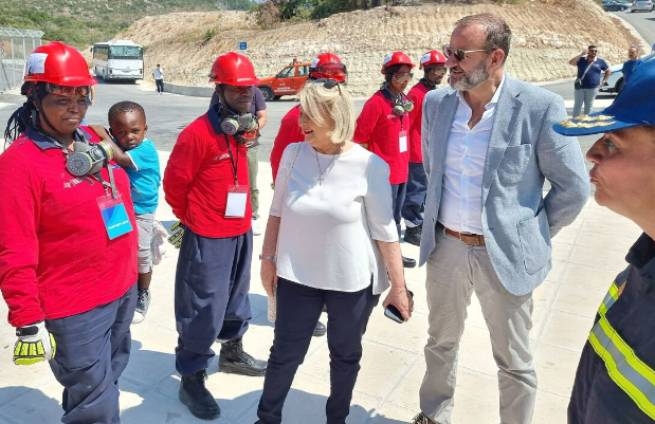 The first group of migrants in Greece has completed a course of training in a pan-European emergency response training program – to act in conditions of earthquakes and forest fires.

The program is funded by the Recovery Fund and aims to integrate migrants into the National Crisis Management and Risk Response Framework. Training takes place in two main areas of the general program, unique for EU– earthquake and fire.

Its implementation symbolically began with training in emergency situations. Because the protection of human life is the highest level of integration, the program facilitates a smooth transition to learning in critical sectors of the Greek economy.

It is worth noting that migrants and refugees have shown an active interest in learning not only self-defense, but also the protection of the island where they live and its population. No less interest was shown in the study of the Greek language.

The migrants were trained by a group of eight senior and senior officers of the Greek fire service. They conducted classes according to the program developed by the headquarters of the fire service, on the basis of a special order from the chief. Through the Recovery Fund, high-tech fire-fighting equipment has been purchased and will be provided to the Samos Fire Department to improve its functioning.

The program was provided in all languages. The event was actively attended by women, two of them – even with babies in their arms.

All integration programs of the Recovery Fund are carried out thanks to the cooperation of ΥΜΑ (integration sector) with the International Organization for Migration (ΔΟΜ), and Dr. Kalliopi Saini is the general coordinator. The Deputy Minister of State for Migration and Asylum, responsible for integration, Sophia Vultepsi was in Samos to complete the first training module and real-time simulation exercises. Ms. Vultepsi, together with the head of the ΔΟΜ, Ambassador Zanluca Rocco (Τζιανλούκα Ρόκκο), presented diplomas to those who completed the course.

The first group of refugees trained in disaster management is a fact. I would like to express my gratitude and congratulations to all those who have made a decisive contribution to the successful completion of such a difficult and complex project, which we hope will become a guide and a model for all of Europe. The Recovery Fund has already begun to provide assistance to local communities, and I would like to especially thank the fire brigade for their ability to adapt and provide assistance even in the most difficult circumstances.

Manos Logothetis, General Secretary for Reception and Asylum Seekers of ΥΜΑ, highlighted the important contribution of the modern reception and identification system: “Order and good living conditions are not only a humanitarian duty, but also contribute to a successful educational process.” Greek ΔΟΜ head Zanluca Rocco said in a statement:

“We are very proud to have contributed to the creation of the first refugee emergency preparedness team in Greece. Working with the Ministry of Immigration and Asylum and using the resources of the Recovery Fund, a group of 30 recognized refugees have learned not only how to protect themselves, but also how to support the Greek authorities who help local communities.This event is another step in creating an inclusive integration mechanism, through which migrants and refugees become part of Greek society, accepting its values ​​and principles.”

During her visit to Samos, Ms. Voultepsi worked closely with Member of Parliament Prof. Christodoulos Stephanadis and the local authorities, who gave her a comprehensive understanding of the island and its needs. The action is implemented within the framework of the National Recovery and Resilience Plan “Greece 2.0” with funding from the European Union NextGenerationEU.