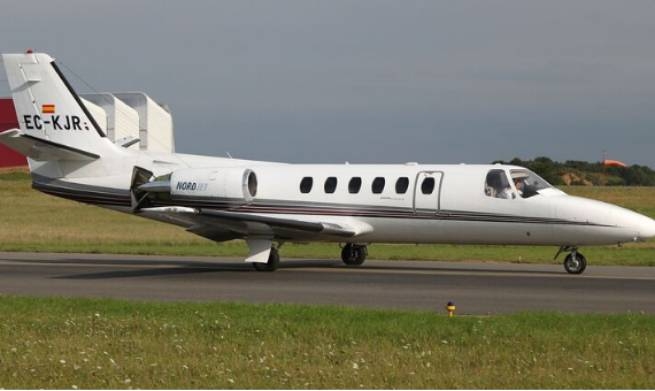 The TT agency, referring to the Swedish rescue service, reported that a private plane crashed off the coast of Latvia.

An Austrian-registered Cessna 551 took off from the city of Jerez in southern Spain without specifying a destination. Before flying over the Baltic Sea, the plane turned twice – over Cologne and Paris, and then flew over the Baltic Sea past the Swedish island of Gotland.

NATO fighters based at the Ämari air base in Estonia, where the Suurküla airfield was located in Soviet times, rose to intercept the aircraft, reports Reuters. This is a military airfield in the Harju County of Estonia, located northwest of the village of Ämari. At some point, the plane began to fall. At 17:37 GMT, he was noted on the tracker as rapidly losing speed and altitude. Filed by FlightRadar24, he crashed off the coast of Latvia, writes RBC.

Danish air force pilots who had previously escorted the aircraft in their area of ​​responsibility reported that no one was in the cockpit.

A spokesman for the Swedish rescue service said:

“We have learned that the plane crashed (at sea) northwest of the city of Ventspils in Latvia.”

According to the newspaper Bild, after taking off in Spain, the aircraft had problems, and in the future, communication with it was lost. German journalists reported that four people were supposed to be on board the crashed plane. The Swedish Coast Guard sent rescue planes, boats and a helicopter to the crash site.

Previously, our publication told how the pilot of a small plane plans direct an air vehicle in the building of the Walmart branch in Tupelo, Mississippi (USA). People from the mall and nearby buildings were evacuated.