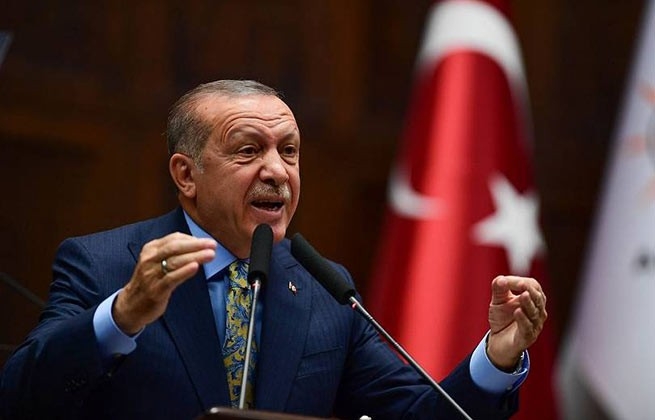 Turkish President Recep Tayyip Erdogan’s direct threat against Greece and the invasion of the Greek islands was made during his visit to the TEKNOFEST technology festival taking place in Amiso (Sampsuda):

“We are not bound by your occupation of the islands. When the time comes, we’ll do the right thing. As they say, one night we can suddenly come.”

In their new provocative statements against Greece, the Turkish president indulged in threats of a Turkish invasion of the Greek Aegean and referred to the catastrophe in Asia Minor in 1922. SNN Greece quotes him:

“Turkey is currently in second place in terms of growth. You know, they say about us “mad Turks” … Crazy Turks continue their path of development. O Greeks! Look at history. If you go further, the price will be high. We have only one thing to say about Greece: don’t forget about Smyrna. We are not bound by your occupation of the islands. When the time comes, we’ll do the right thing. As they say, one night we can suddenly come.

Erdogan’s unequivocal statements were made during the TEKNOFEST technology festival, where the prototype of the Turkish unmanned combat aerial vehicle “Kizilelma” (Red Apple) was presented. The manufacturing company is Baykar, which produces Turkish UAVs and is owned by the family of Erdogan’s son-in-law Bayraktar.

Erdogan’s words come twenty-four hours after the Turkish president’s unacceptable statements that “Greece has no value in NATO” in his speech after Friday prayers: “NATO has strong ties with Turkey.”

And Erdogan’s statements were preceded by “recommendations” by Turkish Defense Minister Hulusi Akar to NATO allies, in which he called on them to treat Greece’s actions objectively. He said that Ankara is closely following the actions of Greece, which, according to Anadolu, violate international law, while noting: “We will continue to respond to the audacity of Greece.”

Hulusi Akar’s remarks were made at a time when Turkey is preparing to send files from its radars to the NATO General Secretariat and the ministries of defense of the alliance member countries, which allegedly prove, according to Ankara, the fact of “harassment” of Turkish F-16 fighters flying over the Aegean Sea and the eastern Mediterranean, the Greek anti-missile system S-300.

Turkey accuses Greece of a “hostile act”. Ankara talks about the violation of Turkish airspace and harassment by Greek aviation. At the same time, Turkish sources claim that harassment by the Greek side continues both in the airspace and in the territorial waters of Turkey, and 33 violations were allegedly recorded.

Turkish leaks about “locking in” Turkish F-16s by Greek S-300s were vehemently denied from the first moment by sources in the Greek Ministry of Defense, attributing these new challenges to Ankara’s propaganda as well as an attempt to cultivate impressions at home and abroad. But earlier, a State Department spokesman clarified that there is no sanctions risk for the S-300 anti-missile system deployed in Crete.

Asked by the Hellas Journal website, a US State Department official explained that the system in question in Greece is not subject to sanctions under the Countering America’s Adversaries Through Sanctions Act (CAATSA):

“The acquisition of the S-300 by Greece took place in the 1990s, decades before the passage of the CAATSA law. Section 231 of the CAATSA only authorizes significant transactions made on or after August 2, 2017. We continue to call on all NATO allies to ensure full interoperability within the alliance.”

Recall: the S-300 anti-missile system was purchased by the Republic of Cyprus, not Greece. But it was this purchase that provoked a strong Turkish reaction, resulting in an American mediation under Richard Holbrooke. The result of the negotiations was the installation of the S-300 system in Crete – with the consent of all parties involved.

A State Department spokesman distanced himself for the second time in a row from Turkish claims that Greece was targeting Turkish F-16 fighter jets. SNN Greece:

“We are aware of these reports. We continue to call on our NATO allies, Greece and Turkey, to work together to maintain peace and security in the region and resolve disputes through diplomacy. We call on all parties to refrain from rhetoric and actions that could further heighten tensions.”