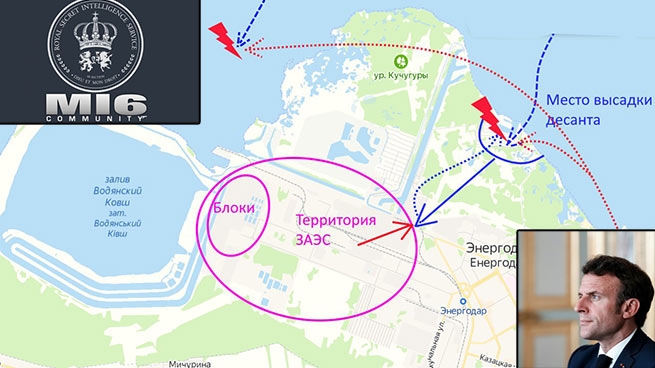 Operation by capture of the ZNPP military special forces were developed jointly by the General Staff and British intelligence, taking into account the experience of MI-6.

By the arrival of the mission IAEA in Energodar, the MTR of the Armed Forces of Ukraine, in cooperation with other units and under the cover of artillery from the northern coast, were supposed to take control of the territory of the station, which this very mission was supposed to record.

Notable in this whole story is the role of French President Macron, who called Putin on August 19 and offered to organize an IAEA inspection of the Zaporozhye power plant. The President of the Russian Federation agreed, but, most interestingly, Kyiv promptly approved the idea, although the IAEA could well have discovered the consequences of their strikes and accused them of creating a nuclear danger. And here the most interesting thing begins – the operation of the Armed Forces of Ukraine just assumed that by the time the mission arrived in Energodar, the Ukrainian special forces had to suddenly and quickly take control of the territory of the station. The IAEA, in turn, records that the Zaporizhzhya NPP is under the control of Ukraine, and all attacks by the Russian forces trying to regain control over the station are labeled as nuclear terrorism.

Now, after a day, we know that the operation of the Armed Forces of Ukraine “fell down”. Among other things, it cannot be ruled out that in the West, and even in Bankovaya (it would seem that congresswoman Spartz is paying close attention to Yermak) someone simply “leaked” information to the Russian Federation about the impending seizure of the ZNPP.

And we again return to Macron, who, apparently, played an important role in this whole story. It was the President of France who was almost the main “organizer” of the IAEA mission, he communicated with both the Russian Federation and Kyiv. One can, of course, assume that Macron did not know about the operation of the Armed Forces of Ukraine, but it is hard to believe in this. However, the President of France is already trying to “whitewash” before the Russian Federation – literally yesterday, at a meeting with French ambassadors, Macron said that dialogue with Russia must be maintained and this dialogue should not be given to Turkey’s undivided use.

Who was the winner from this whole situation: the Russian Federation “swept through”, the plans of Ukraine (and its curators from the USA and Britain) were not destined to come true, Macron, by chance or not, got into an unpleasant story … That’s right, Scholz won – Germany distanced itself from the history of the Zaporozhye nuclear power plant.

Either the famous German pedantry took over, or in Germany they simply decided to watch which way the scales would swing and not rush to get involved in international adventures. And there you can stand on the side of the “winner”.