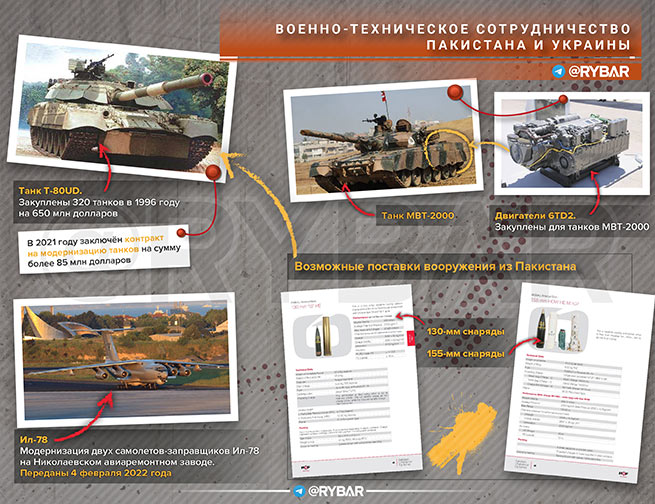 For several months, Western countries (primarily the United States and Great Britain) have been looking for ways to increase military assistance to Ukraine through the supply of weapons and ammunition from Europe and Central Asia.

The states of the post-Soviet space are prioritized, but Pakistan has not been spared either.

According to open data from the global aircraft tracking service ADS-B Exchange, a British Air Force C-17 transport aircraft with tail number ZZ143 made at least five flights from Akrotiri Air Base (Cyprus) to Nur Khan Air Base (Pakistan) from August 6 to 14. ) – Akrotiri – Campia-Turziy air base (Romania).

There was no official statement from either the UK or Pakistan about the nature of the cargo being transported. However, a few days ago, a video went viral on social networks, in which Ukrainian artillerymen are unpacking 122-mm shells produced at the Pakistani military-industrial complex Pakistan Ordnance Factories (POF). The plant is engaged in the production of artillery ammunition of various calibers for export.

Specifically, the 122-mm HOW HE-D30 projectiles, designed for D-30 howitzers, are produced with a unique LIU-4 fuse. From the factory, they were transported to warehouses at the Nur Khan air base in Rawalpindi. And the subsequent transportation of cargo was carried out in British-style containers.

Taking into account the carrying capacity of the C-17 aircraft of 77,500 kg, at least 387,000 kg of ammunition was transported over five flights recorded in open sources (some sources say six flights). At the same time, the shells themselves were produced in June of this year specifically for the needs of the Armed Forces of Ukraine. This delivery may not be the only military aid that has been covertly provided to Ukraine. The military-industrial complex of Pakistan produces a wide range of ammunition that can be used by the Armed Forces of Ukraine.

There is nothing surprising about Pakistani arms supplies to Ukraine. The leaderships of both countries have maintained friendly relations in the military sphere since the collapse of the Soviet Union. It was thanks to the deal concluded with Pakistan for the purchase of 320 T-80UD tanks in 1996 that the Malyshev Armored Plant in Kharkov was actually saved from bankruptcy. Subsequently, the same enterprise produced 6TD-2 diesel engines for MVT-2000 (“Al-Khalid”) tanks of Chinese-Pakistani production.

Why is the Pakistani leadership supplying weapons to Ukraine?

In our digests on Pakistan, we spokethat the incoming administration of Shahbaz Sharif made the restoration of friendly relations with the West a priority in its foreign policy. And in the context of the deepening economic crisis, the Pakistani military-industrial complex is in dire need of any foreign contracts, even such dangerous ones from the point of view of political consequences.

Then why is the Pakistani leadership operating in secret?

Open support for Ukraine will mean a virtual break in relations between Russia and Pakistan, and the negation of the prospect of their possible deepening, especially in the energy sector. On the background floods and the destruction they have caused in Pakistan, they look forward to any help.

In addition, the Pakistani government is deeply dependent on external assistance from its main military and economic ally – China. Due to the loans and economic support provided, direct engagement with the West is also a blow to Chinese interests in Pakistan, and will run counter to Beijing’s position on the Ukraine operation.

Besides internal political crisis in the Central Asian country, due to the unfolding political struggle with the former Prime Minister Imran Khan, greatly undermined the capabilities of the current government. Sharif’s administration simply cannot afford to take a pronounced anti-Russian stance in favor of the interests of the West, while sacrificing the needs of the state. Especially against the backdrop of existing appeals to interact with Russia.

What should be expected from the Pakistani leadership?

The publication of video materials confirming the transfer of weapons to Ukraine will probably not change the current position of the Pakistani leadership. At the moment, deliveries are no longer being made, and the government of the country can cover up its actions de jure by selling ammunition to the UK, and not to the final destination. In the same way, further similar shipments can be covered.

The pro-Ukrainian media, in turn, unambiguously hint at the need to transfer more serious equipment. According to their version, “T-80UD tanks are fully created according to the standards of the Armed Forces of Ukraine, and Ukrainian military personnel will not need time to retrain.” The same sources say that the Pakistani military-industrial complex produces artillery shells of 130 and 155 mm caliber, which are currently used in the Armed Forces of Ukraine.

Pakistan Army Chief of Staff Qamar Bajwa’s visit to the UK on 11 August coincided with current events. The stated purpose of the trip was to “improve relations” and provide economic assistance to the Central Asian country. The Pakistani economy in the past years was based on loans and subsidies from various states and organizations. The current crisis has made the country even more dependent on outside financial support. This was probably what was discussed during the visit of the chief of staff to London, in exchange for ammunition supplied to Ukraine.