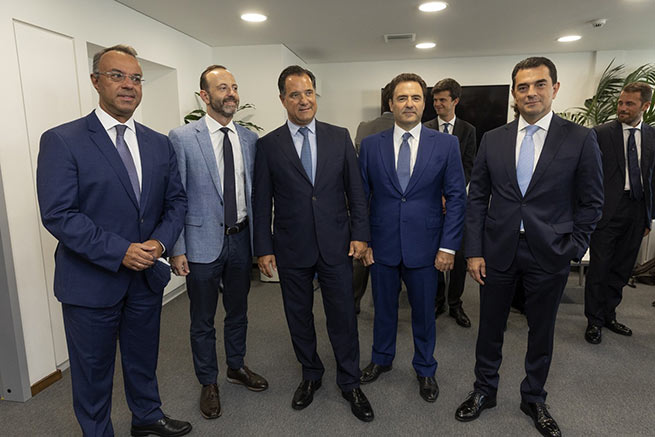 Italgas CEO Paolo Gallo said the company will “put our experience and technological know-how at the disposal of the country to build an advanced infrastructure and contribute to the achievement of the coal and lignite phase-out goals set by the government, in line with the targets EU“In the European context, he noted, Greece and Italy can “become a benchmark for the strategic role of smart, digital and flexible gas networks to facilitate the energy transition.”

Dimitris Politis, CEO of HRADF, noted that “the completion of the sale of DEPA Infrastructure to Italgas Group is one of the most important asset development projects undertaken by HRADF, with significant benefits for the Greek economy and citizens.”

Finance Minister Christos Staikouras said the completion of the deal shows the confidence of the international investor community in the prospects for the Greek economy and will inspire new investment, while Energy Minister Skrekas highlighted Greece’s role in becoming a key energy hub in the region.

The transaction was completed following the fulfillment of the preconditions set out in the sale and purchase agreement and was financed by Italgas through dedicated credit lines.

All this was sold for 755 million euros, exactly 10% of the real value of the company, given the current economic situation.

Italgas is the leading natural gas distribution operator in Italy and third in Europe. It operates a distribution network with a total length of about 75,000 kilometers, through which about 9 billion cubic meters of natural gas was distributed to 7.8 million consumers over the past year. The group owns 1899 concessions and has a historical presence in major Italian cities including Turin, Venice, Florence and Rome.

The Italgas Strategic Plan for 2022-2028, presented to the market on 15 June, provides for investments totaling 1.8 billion euros, which will be directed to the acquisition of DEPA Infrastructure, its consolidation and implementation of development programs, with particular attention to the digitalization of renewable gas networks, such like biomethane and hydrogen, and generally in line with the decarbonization targets set by the Greek government and those of the EU.

PS I remember that when the “rescue” agreement was adopted, it was about the privatization of unprofitable state-owned companies. Then they forgot about the word unprofitable and began to sell everything. Of course, I understand that creditors demand this, but government officials need to have at least a little conscience … In the end, the Greeks will be left with the Acropolis and a handful of olives. However, I’m not sure about the Acropolis. If last time the Greeks violently refused to sell the Acropolis, this time, no doubt, they will agree. After all, there is almost nothing to sell.