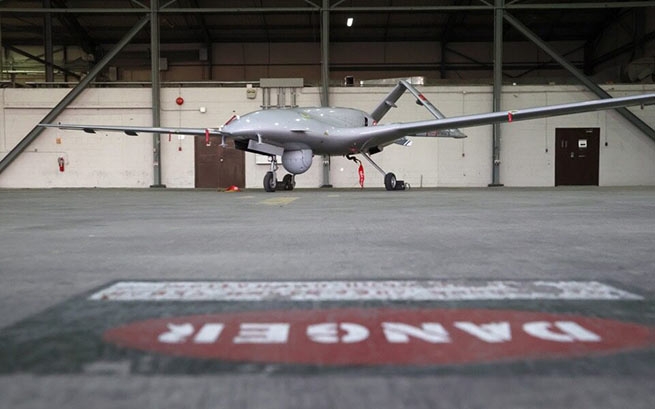 The growing threat posed by Turkish unmanned aerial vehicles (UAVs), which have spearheaded Ankara’s provocations in the Aegean in recent months, has become the focus of not only the Greek military, but also foreign policy.

This concern is exacerbated by their increasing use to violate Greek national airspace, flying over the Greek islands. They are also the subject of Turkish exports to Africa, Asia and Europe. Turkish President Recep Tayyip Erdogan stressed that the country’s armed forces are present everywhere “with our unmanned aerial vehicles.”

In response to these threats, the Greek Ministry of Defense is seeking to protect the Aegean from UAV encroachment by deploying countermeasure systems on the islands. According to Turkish Minister of Industry Mustafa Varanka, the country’s armed forces have at least 200 UAVs.

On Monday, Baykar director Selçuk Bayraktar, who is also Erdogan’s son-in-law, introduced “Kizil Elma” (Red Apple), a model of a new unmanned fighter jet being prepared by Turkey and expected to first fly in March 2023.

The most important unmanned fighter, and arguably the most successful, is the Bayraktar TB2. At least 300 of these aircraft have been produced, and there are about 180 of them in service with the Turkish armed forces. They are used to deliver targeted strikes against tanks and armored combat vehicles. The export success of this unmanned aircraft is impressive: they have been sold or supplied to Azerbaijan, Ukraine, Qatar, Libya, Turkmenistan, Nigeria and Pakistan, there are reports of deliveries to Ethiopia, Djibouti and Kyrgyzstan. Poland ordered 24 Bayraktar TB2s.

These drones have proven their worth during the fighting in Nagorno-Karabakh, which resulted in Azerbaijan gaining the upper hand, as well as during Ukrainian strikes against Russian troops.

The Bayraktar Akinci is the company’s second unmanned aircraft capable of carrying surface-to-air and air-to-air weapons systems. It has also been used by the armed forces of Pakistan and Azerbaijan, and is considered especially successful in Turkey’s missions against the PKK.

The Turkish Aerospace Industry (TUSAS) is also manufacturing drones such as the Anka, of which about 40 have been delivered to date, with eight more awaiting delivery to Tunisia and three to Kazakhstan. She also builds the Aksungur aircraft.