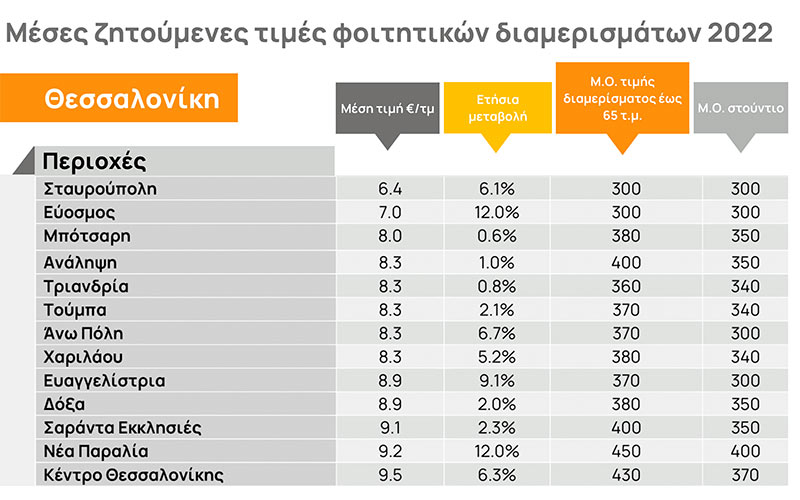 The announcement of points for admission to higher education since the end of July has caused a “commotion” in the Greek real estate market, as students rushed in search of housing for rent.

Spitogatos Insights, based on the Spitogatos Price Index, analyzed the price dynamics of student housing in Athens, Thessaloniki and throughout Greece, as well as the most popular student housing search criteria. This analysis took into account that the 1st time the grounds were announced so early, and also considered the possibility of cohabitation.

Where and how prices vary in the main student search areas

Many students will start their academic year in one of the educational institutions of Thessaloniki, where the average asking price for student housing is 8.5 €/sq. m, which is 4% more than in 2021.

The areas of Thessaloniki with the highest price for student housing are the center, Saranda Ekklesia-Evangelistria, Triandria-Doksa, while the most affordable areas are Stavroupoli and Evosmos. The largest increase in the asking price for renting student houses, 12%, occurred in the areas of Evosmos and Nea Paralia.

In the rest of Greece, the highest average asking price for student housing was recorded in Corfu, Chania, Rethymno, Preveza, Trikala, Heraklion, Crete and Volos. The most affordable cities for renting student housing are Didymoteicho, Kastoria, Sparta, Florina, Lamia and Messolonghi. 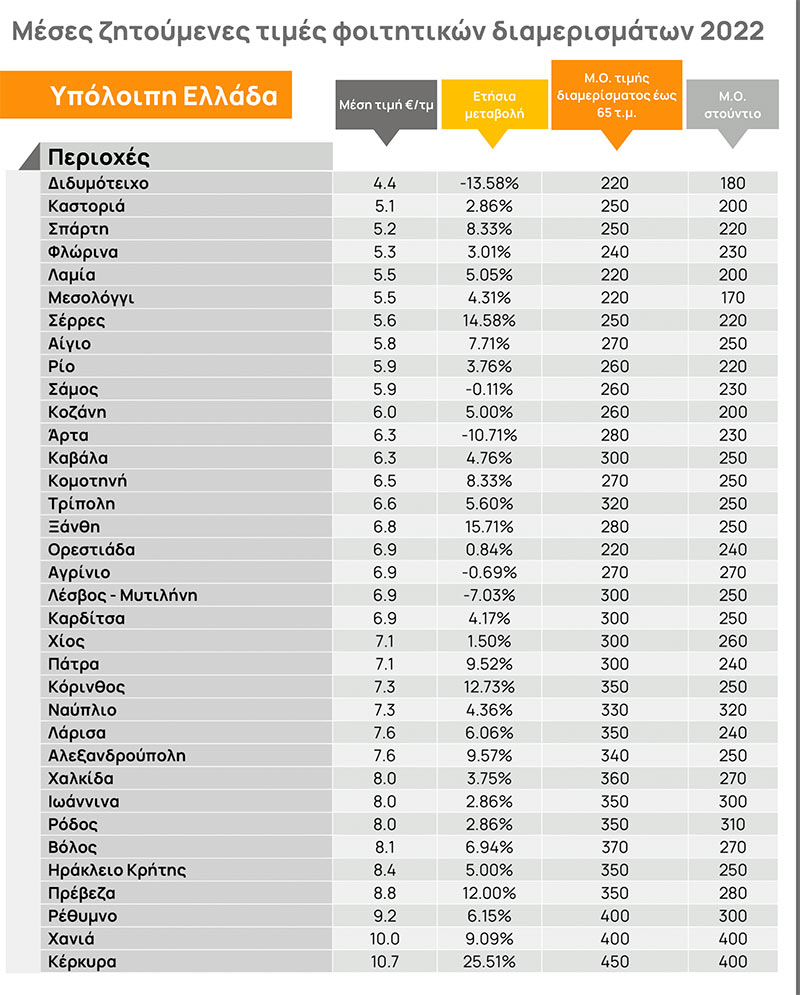 In addition to search characteristics and prices, Spitogatos Insights’ analysis also focused on whether an earlier listing of bases signals a change in how students are searched today.

To begin with, given that the announcement of the bases was at the beginning of this year, the fact that the search for housing for new students also officially began a month earlier. Indeed, traffic registered on Spitogatos network sites between late June and early August increased by 50% year-on-year, while advertiser-interested queries showed a 60% increase.

“Another feature of this year is that the bases for admission to universities were announced at the end of July, a month earlier than in previous years, so the student search period begins in turn earlier. This is a new state for the market, and perhaps it due to the very large decline in affordability we are seeing this year based on early data, we believe this decline in affordability will continue, but may gradually decrease as more properties begin to be rented out to students at as the tourist season ends,” Melahronos added.

However, as all signs show, finding student housing this year is an equation for the strong-willed, as rising asking prices, declining student housing available, and high demand for real estate are of major concern to interested parties. At the same time, the supply (“stock”) of affordable student housing remained reduced compared to the corresponding 2021 base announcement period (end of August) (-22% nationally). However, since the announcement (July 28) to date, more student properties have been on sale (+14.6%).

“A very good tourist season is great for our economy, but in recent years it has been putting strong upward pressure on prices and downward pressure on student housing availability,” said Dimitris Melahroninos, CEO of Spitogatos.

What are the main criteria for finding housing for students? 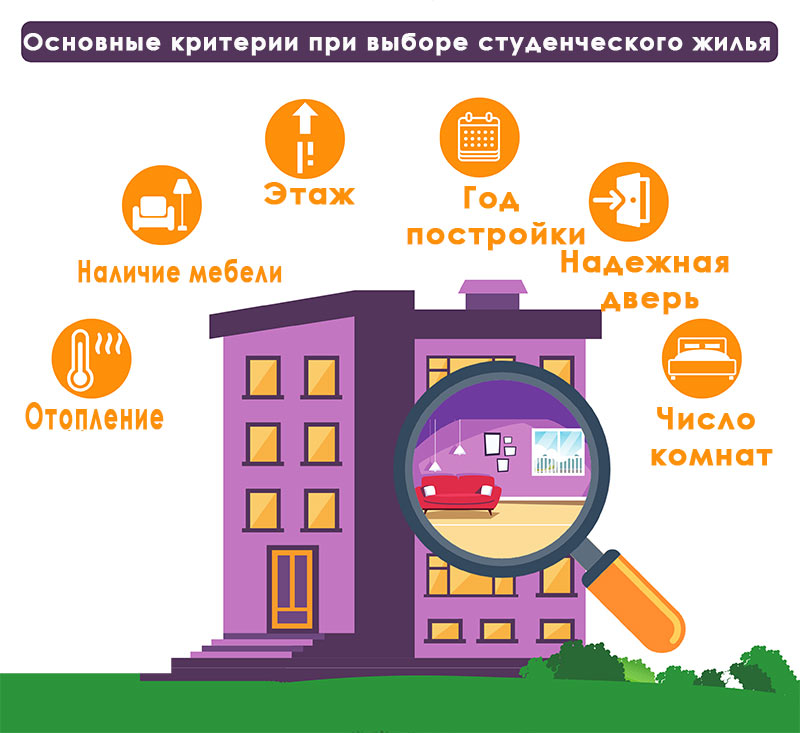 Looking at the searches that have been made since the announcement of the balls, it seems that interested parties choose the following main criteria:

Will cohabitation become a scenario for more students?

Analyzing further the qualitative characteristics of the demand for student housing, we can conclude that, despite all the existing problems, there are many applicants who are considering the possibility of sharing the costs, looking for real estate for the purpose of cohabitation.

Thus, there are quite a few students who are looking for a larger apartment, keeping in mind the possibility of cohabitation and the benefits associated with it, such as cost savings, joint work on apartment care, and so on. 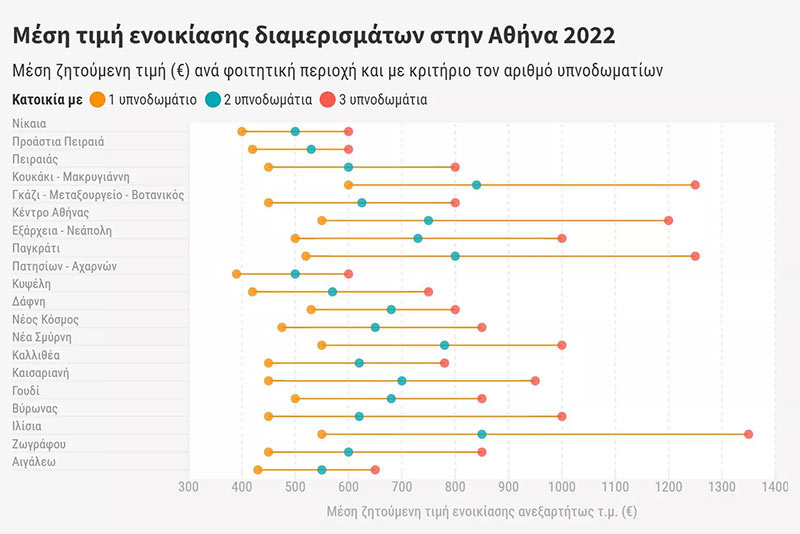 As for the cost of renting student property, a one-bedroom apartment in areas of Athens, compared to apartments that can accommodate more people, will seem like an expensive “pleasure”.

In purely student districts such as Zografou, Goudi and Egaleo, the average asking price of two-room apartments compared to one-room apartments increases by an average of 32%.

Similarly, in Thessaloniki and the rest of Greece, a three-room apartment costs on average 28% more than the offer price of a two-room apartment.

“This year, when prices seem to have hit all-time highs, we are seeing from the first search data on our web pages more changes in areas further away from schools in areas with good transport links, but also an increase in the search for large apartments in which students can live together.”

Thus, while shared housing is not particularly ingrained in Greek culture, unlike in other countries where it is widespread, it appears to be slowly gaining ground. This event is of particular interest in terms of whether it will change the rental property landscape in the near future.