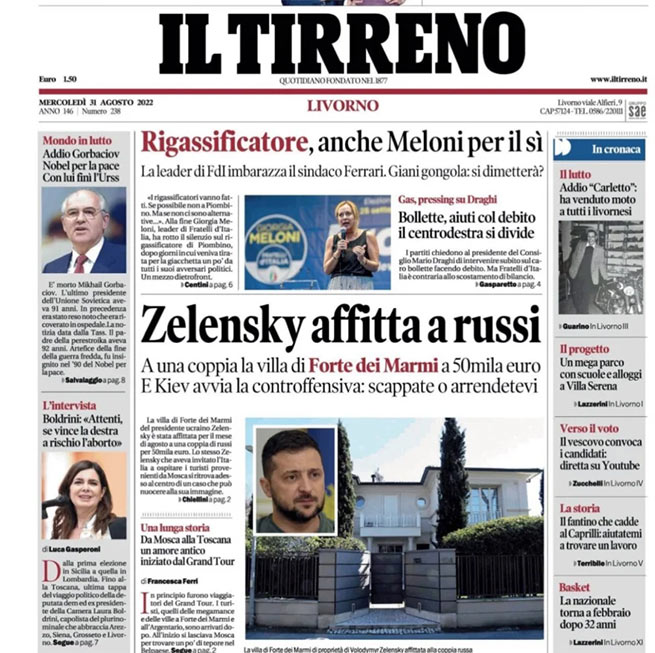 The scandal with the publication of the Italian publication iltirreno.it that Zelensky rented his villa to Russian tourists is savored by the Greek media.

The villa of Ukrainian President Volodymyr Zelensky in the Italian city of Forte dei Marmi was leased to a couple of Russians living in the UK, claims Tuscan newspaper il Tirreno.
The publication reported that a certain Russian woman had previously published photos from the garden in a small area of ​​the house. It is specified that the local real estate agency was negotiating with a group of Korean tourists who wanted to rent a villa for August for 50-70 thousand euros. Nevertheless, the deal did not take place, and a little later the house was allegedly rented by some Russians from London.
After the publication of il Tirreno, representatives of other Italian media contacted the real estate agency and received a categorical refutation of this information.
Realtors called the message il Tirreno fake news, noting that the villa is now free, but in the summer it was rented by a couple. In a newspaper comment la Stampa the agency reported that the owners of the house set a condition: not to rent the house to the Russians.
Greek edition ProNews reportsthat “the villa belongs to Zelensky’s wife.” “It was not rented out to persons with Russian citizenship, because we have a warrant from the owner, which categorically forbids us from doing this. We can rent out to any person if he has a different citizenship: Europeans, Americans, and so on … .”, says Claudio Salvini, real estate agent at Real Estate Forte dei Marmi Villas, which manages the “offshore” villa of Ukrainian President Volodymyr Zelensky.

The article has sparked outrage in Italy, especially from tourism professionals who complain that while they are barred from hosting Russian tourists, Zelensky has no problem renting out his villa to them.

“My phone has been ringing since 8 am.” says the broker, demonstrating the magnitude of the situation. “What was written is fake news. The villa is rented to a couple for the summer, I can’t tell if they live in London or not. The contract was made with a man. And now she is a hotelier, so she is back on the market. If you want to rent it, you can do it,” stresses the broker.
The Vittoria Apuana villa in question is “registered to an Italian company owned by another company located in Cyprus, which, apparently, belongs to Zelensky’s wife, who instructed us to rent a villa with this item – only not Russian,” continues Salvini . “Perhaps someone passing by heard someone speaking Russian and assumed that there were Russians in the house. But I categorically deny this. Perhaps they were guests, but not those who rented a house,” he adds.

News had been circulating in Versilia for days that an alleged Russian couple had rented Ukrainian leader Zelensky’s villa in Forte dei Marmi, but the case took on serious proportions after Il Tirreno published the story. According to the newspaper, negotiations were held with Korean tourists who were ready to rent it in August for 50-70 thousand euros. However, the deal was to be cancelled. And the deal will be made with a Russian couple who live and work in London. But the real estate agent denies this version. “I can’t add anything else on privacy issues either, but what is reported is not true,” he concludes.

The mayor of Forte dei Marmi, Bruno Murzi, did not know that Zelensky owned the villa. The La Repubblica newspaper website also quotes his comment, referring to the villa at the center of the rumors in Versilia, he said: “We didn’t know anything, and to be honest, before the start of the war, the only information we had about the villa, located in the Villa Apuana area, it’s that it belonged to some company.”

The news of a Russian couple renting the Ukrainian leader’s villa has been circulating in Versilia for several days now, and was reported by Tyrrhenian Sea, which wrote about several photos that surfaced on social media showing a Russian tourist in the park of the villa in Vittoria Apuana.

The recent tirade of Volodymyr Zelensky who has no hesitation in demanding that the West get involved in a world war to save itself and not its people, because this truth can be directly related to the recent revelations in the Pandora Papers, which showed that the President of Ukraine is not ” a hero,” as some of the media try to convince us. 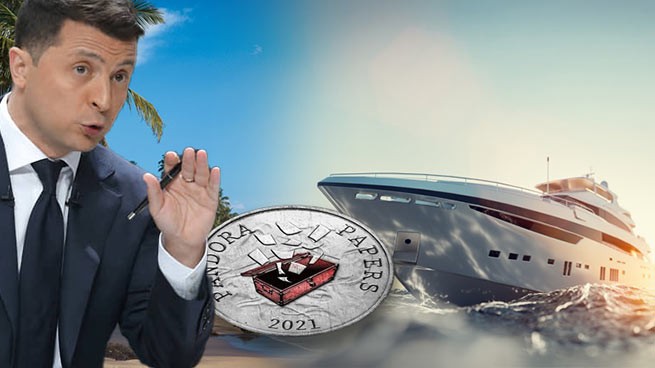 Indeed, if we analyze the sequence of events after the exposure offshore scandal Zelenskythe reality may be completely different. After all, the actions of the Ukrainian president immediately after the exposure are reminiscent of the actions of the Azerbaijani dictator Aliyev, who without hesitation arranged bloodshed with Armenia only when his own branches and routes of black money were revealed.

An indicator of who Zelensky really is is the staged case of the alleged treason of the former president and great political rival Poroshenko.