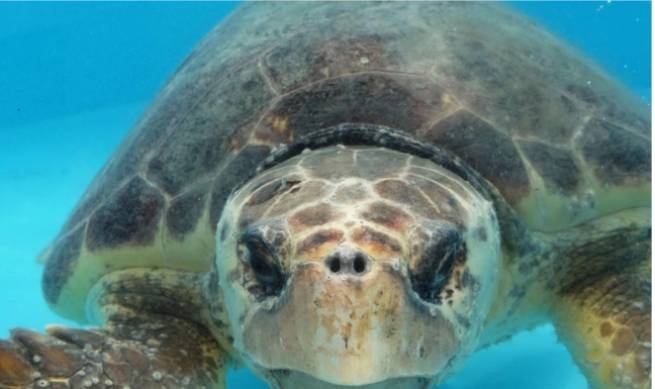 In the resort province of Antalya, not far from the popular resort of Güzeolaba, a tourist from Russia decided to swim in the morning. But the bath ended… in the hospital.

The shocking attack of a sea turtle caretta-caretta on a 64-year-old woman from Yekaterinburg took place in the shallow water of a public beach, reports Sozcu. The first attack was made when tourist Lydia Bazarova was swimming on her back – she suddenly felt pain in her hip. The second time the turtle bit her on the arm.

The lifeguard who was on duty on the beach hurried to help, but was also attacked by an aggressive carriage and received a bite in the shoulder. After the turtle sailed away, the injured Russian woman was helped to get to the hotel, and then to the hospital. After examination, the doctors recorded signs of an attack – serious hematomas and traces of clenching of powerful jaws. A woman, immensely grateful to the rescuer, says:

“I swam for a while and returned to shore. When I was 4-5 meters from the beach, I wanted to lie on my back in the water. Suddenly I felt a strong pain in my thigh, probably her jaw was very strong. I did not understand what happened and started to fight back. Then came a bite on the hand. A lifeguard came to me, but the turtle attacked him too. The rescuer told me to go ashore immediately, while he himself stayed with the animal. I was so scared that I won’t go into the sea for a long time.”

Eyewitnesses are telling TOURPROMthat the turtle was 5-8 meters from the shore, and any swimmer could become a victim of an attack. As it turned out, the Russian woman did not become the first – over the past two weeks, 11 tourists have suffered from the aggression of huge marine inhabitants. It is possible that turtles in such cases protect their offspring.

Mehmet Gökoglu, a teacher at the Faculty of Aquaculture at Akdeniz University, said that turtle attacks on people have been recorded off the coast of the resort areas of Lara, Belek and Side. He explained that the abundance of hotels and recreation areas simply crowded out sea turtles, which periodically have to come ashore:

“But people are everywhere, living beings have nowhere to go. Hence the attacks. We know that attacks usually happen around noon and in shallow water.”

Reference: Big-headed sea turtle or carriage (Caretta caretta) is a species of sea turtles, the only remaining representative of the genus loggerheads or big-headed sea turtles. An adult reaches a length of 95 cm and a mass of 100 to 200 kg. She has no teeth, but the jaw is powerful and the palate is very sharp. It feeds mainly on mollusks and crustaceans, as well as fish, jellyfish, and sponges. Females lay eggs at night, in spring and autumn, 4-5 times per season. In a clutch, as a rule, from 100 to 126 eggs with a leathery shell about 4 cm in diameter. The turtles hatch after 1-2 months, spend several hours in the nest, and then crawl out of the sand together and head to the sea.