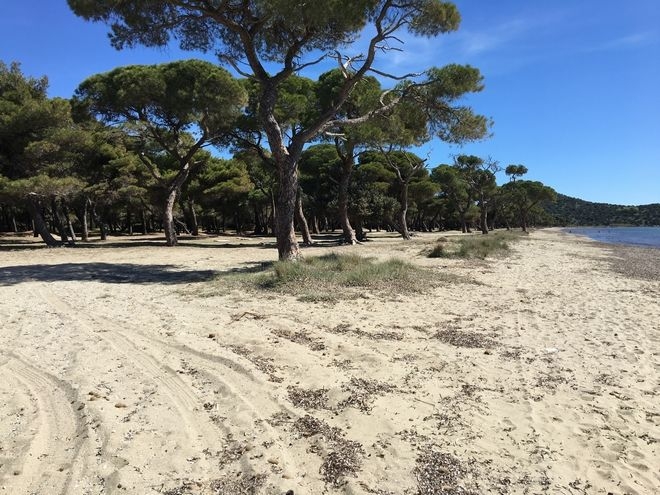 Sometimes a pipe dream is much closer than we might think. Just 10 euros spent on petrol and less than an hour from the outskirts of Athens and you could be in paradise. A magnificent forest (one of the few in Greece with cedars and a rare species of pine), more than 3 kilometers of golden sand and shallow turquoise waters create an incredible atmosphere for outdoor recreation in close proximity to Athens.

This is an area called Schinias (Ο Σχοινιάς ή Σχινιάς), a coastal area of ​​northeastern Attica and a small settlement. “Paradise” is located at the northeastern end of the Marathon plain, in a coastal area with one of the largest beaches in Attica.

The Schinias area is classified as a wetland.

Wetlands, or wetlands (eng. Wetlands) – areas of terrain, the soil of which is an aquifer with constant or seasonal moisture.

Here is one of the largest coniferous forests in Greece (Schinias, together with the forest of Strofilia in Achaia and Koukounaria in Skiathos, which are the most important pine forests in Greece, they grow rare species of Pinus Pinea trees).

Schinias Beach is popular with summer swimmers. Here, for the Olympic Games (in 2004), a canal for rowing competitions was created. In the western part of the beach is the place where the Battle of Marathon took place, and not far from this area (about 4 km) is the Tomb of Marathon (Τύμβος του Μαραθώνα).

The place is extremely popular for swimming in the sea. The beach has also been used for filming, for example in 1971 in the movie “Abuse of Power” (“Κατάχρησις εξουσίας”) with Nikos Kourkulos, and in 2008 in the movie “Ι4 – Λούφα και απαλλαγή”.

Prime Minister Andreas Papandreou was very fond of Schinias Beach and would often start his day by swimming there very early in the morning before heading to his office.