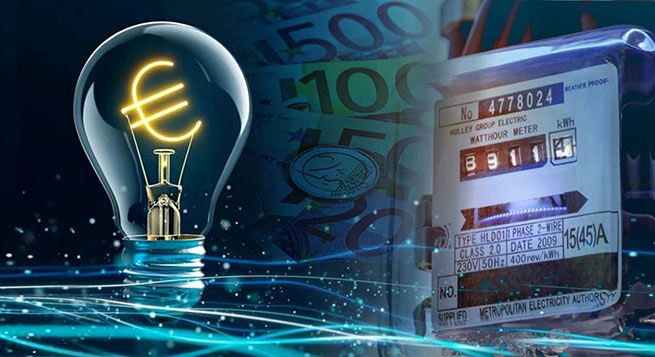 What has been happening in Greece with electricity over the past year goes beyond even the most nightmarish scenarios.

On the one hand, the companies are selling the social good called electricity at exorbitant prices, and on the other hand, they are collecting subsidies provided by the Mitsotakis government by siphoning funds from the budget, which consists of taxes and taxpayers’ savings.

Electricity producers are making a ton of money just by… raising prices, while the average resident of the country is struggling to survive with an earnings of 780 euros, because this is the average net salary in Greece.

In many cases, the electricity bill exceeds this salary, even with the subsidy!

The average self-employed (out of 1.5 million professional workers, only 230,000 have employees, and 92% of them employ less than nine workers) sees their turnover plummet and their profits drop to the floor.

All these people now see with horror that cooking in an electric oven at home will cost them about 6 euros for electricity alone.

But the cost of raw materials for food has also risen, mainly due to electricity (already now, food prices have risen by 20%, and from September there will be another average increase of 20%).

And this is clearly just the beginning…

It is no coincidence that electricity suppliers were sent about 300,000 applications for power outages. What will these people do without electricity?

Already in August 2019 (just a month after Kyriakos Mitsotakis came to power), amid the celebrations, a decision was made to cancel the production of electricity in power plants using brown coal (lignite). The mainstream media then “admired” the country’s leader for his pioneering “green” development.

In the absence of lignite, and precisely because the storage of electricity from renewable energy sources (RES) is not allowed, natural gas has become the dominant fuel.

On the other hand, the limit was not introduced. They did not force electricity suppliers to sign long-term contracts. To compound the crime, a year later, at the end of 2021, a sale was added ΔΕΗ. In effect, the word “state” was removed from ΔΕΗ, thus the privately owned company was attached to the three gas cartels.

Last Tuesday, Minister of Energy K. Skrekas said: “In September we will absorb 94% of the increase in households, with the subsidy reaching 639 euros/MWh,” he said, adding: “This month, the government will allocate 1.9 billion euros for subsidies electricity bills for households and businesses.

In addition, he said that the mechanism for limiting the amounts received by electricity producers collected 1.021 billion euros in revenue in the first 41 days of its operation. Thus the government of Mitsotakis in 45 days took €1.021 billion from service providers as “sky-high profits” and return them to them through a subsidy mechanism. In September alone, electricity suppliers will receive 1.9 billion euros. If we add to this 1.1 billion euros in August, of which 250 million euros came from the state budget, it is easy to understand who wins and how much on this topic.

On the other hand, Greek households as well as tourists pay a lot of money both explicitly and implicitly, resulting in excess tax revenue through VAT.

Since last September, Greece has allocated 6.8 billion euros to mitigate the effects of the energy crisis, equivalent to 3.7% of its GDP and the highest among European countries, according to a Bloomberg report that cites data from the Bruegel think tank. In second place is Lithuania (3.6% of GDP or 2 billion euros), in third place is Italy (2.8% of GDP or 49.5 billion euros).

The government’s goal is for the state subsidy to “absorb” 80-90% of tariff increases. This gives “fiscal bloodletting” for August-September in the amount of 1.1 billion euros.

It is estimated that another 800 million euros will be required from the state budget by the end of the year. This is provided that the wholesale price remains the same, which is considered almost impossible due to Russian geo-economic games.

Electricity as a price multiplier

But there is another component – inflation. For the “infallible” government of Mitsotakis, Russia is only responsible for the rise in prices that Greek society is suffering from. But banking giant UBS is restoring the truth. In his analysis, he believes that the energy crisis (electricity and fuel) has a negative side effect on household finances.

As you know, 68% of inflationary pressure in Greece is caused by bills for fuel and electricity. Gasoline prices, which rose 33% year-on-year in July, contribute 20% to the margin of error, according to UBS. This means that 48% of Greece’s inflation comes from electricity bills.

Clearly, electricity is a price multiplier. To be precise, this is the biggest price increase multiplier. As the supermarket sector shows, since March last year prices for basic commodities have risen 45%! Let’s take flour for example. In March last year, its price was 1.28 euros per kilogram, and at the end of August it already costs 1.86 euros.

The ever-increasing cost of electricity, as well as the cost of money, which has increased due to rising interest rates, also led to an increase in prices from 4% to 20% in August for a number of products (meat, cheese, dairy products, instant coffee, eggs, stationery ). According to estimates, we expect another explosive price increase from September. According to the estimates of the supermarket sector, an increase in the order should be expected: