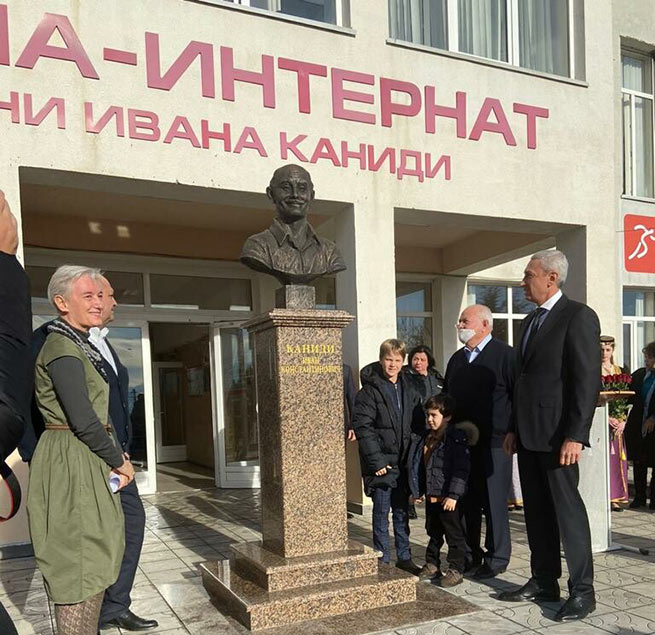 18 years ago, on September 3, 2004, the life of Ivan Kanidi, a wonderful person and teacher, who at the cost of his own life saved children in a Beslan school seized by militants, ended.

The Pontic Greek Ioannis (Janis) Kanidis was born on January 1, 1930 in the village of Malaya Iraga, Tetritskaro region of Georgia, where his father worked as a collective farm chairman. For the residents of Beslan, he was Ivan Konstantinovich Kanidi, who for many years taught physical education at secondary school No. 1. He chose this profession in his youth, graduating from the faculty of physical education of the Ordzhenikidze (Vladikavkaz) Khetagurov Pedagogical Institute in 1953, and remained faithful to her all his life.

Ivan Kanidi was fond of sports since childhood, he played football well, went in for athletics and boxing, and participated in cycling races. With pleasure he worked with children, instilling in them a love for sports. Even the equipment for the basketball section, which he led at school, was often purchased with his own money. Despite the age of 74, the youthfully slender physical education teacher was in no hurry to retire. Many residents of Beslan call Ivan Konstantinovich their favorite teacher, to whom, even as adults, they came to talk about their life problems and ask for advice. On September 1, 2004, Ivan Konstantinovich, along with everyone, came to the school line. He did this for many years, knowing that at school he would have a favorite job and students, for whom sports would undoubtedly become an important assistant in life. He could not even imagine that at the school he would meet not only with students and their parents, but also with armed terrorists. As the hostage-taking began, the gunmen offered to leave, but Canidi stayed with his students to try to save their lives.

Bust of Janis Kanidi, installed in Beslan at the entrance to the boarding school named after him

Canidi saved several children in the first minutes of the hostage-taking, when he closed them in one of the school rooms, from where they later managed to escape. In the gym, where the militants drove the hostages, he did his best to alleviate the plight of the children, trying to get the terrorists to give them at least some water. He openly declared to the militants that they were not Caucasians and not men, since they were fighting with women and children, for which he was severely beaten. Under him, labor teacher Alexander Mikhailov, who also tried to resist the terrorists, was killed, but this did not stop Kanidi. Even on the first day of the capture, he suffered a heart attack, but continued with all his might to support the children, who were weakening from the heat and lack of water. According to survivors, he managed to deactivate one or two explosive devices, having previously covered them with his body to prevent fragments from scattering if an explosion occurred. As always, surrounded by children, he inspired them that help would come, and this horror would soon end. When the assault began, and explosions sounded in the gym, protecting the children, Canidi fought with a militant who was about to shoot schoolchildren from a machine gun. He managed to grab the barrel of the machine gun, and the first round went not to the children, but to the remains of the ceiling hanging over the gym. The fight was unequal, but he won some seconds, allowing the children to jump out of the already blazing school. They say that he never released the barrel of the machine gun, which until the last moment was taken away from the children. Unable to cope with a man who was clearly several times older than him in an open confrontation, the militant pulled out a pistol and fired several times at point-blank range. 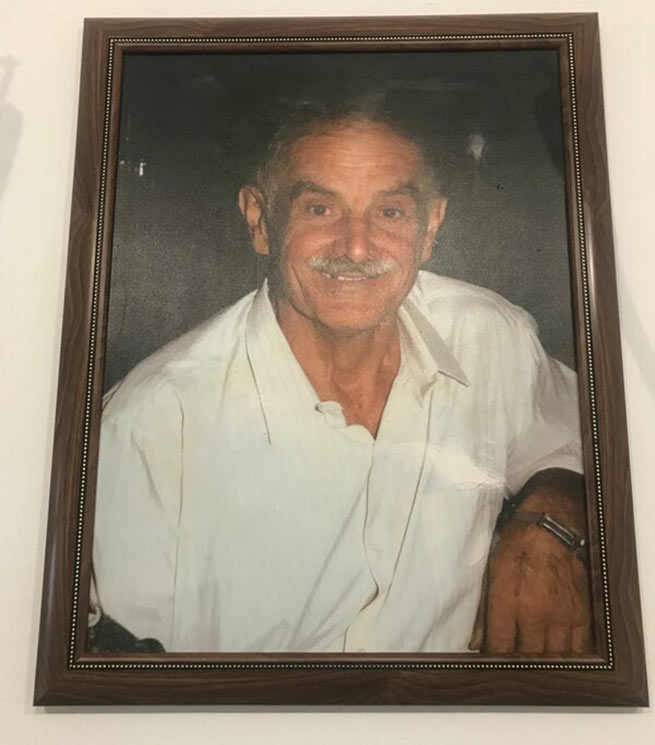 Photograph by Giannis Kanidis, which is in the school museum.

After the Beslan tragedy, the Western press wrote with surprise about the feat of the teacher, who, despite his advanced age, boldly opposed the militants. And the Greek government even decided to allocate funds for the construction of a school named after him in Beslan. On December 9, 2004, Ivan Konstantinovich Kanidi was posthumously awarded the Badge of Honor of the Commissioner for Human Rights in the Russian Federation “For the Protection of Human Rights”. The presentation for the award said: “Being taken hostage, Ivan Konstantinovich defused two explosive devices; until the last minute of his life, he saved children, shielding them with himself. The terrorists suggested that he leave the school, given his advanced age, but he refused to leave the children in trouble. During the operation to free students, Ivan Konstantinovich died at the hands of terrorists. A few years before the tragedy, one of Canidi’s students wrote poems dedicated to his teacher:

And, for a moment, frozen at the threshold,

I – the happiest – fell into that world,

Where, it seemed, the domain of God.

Well, our God was always in a hurry to help us,

If we were at odds with the will,

And taught us the great prayer of labor

Through sweat, through tears and pain.

The lines are naive, but sincere, they contain the deepest respect and gratitude for the Teacher, who carried this high title through his whole life and remained faithful to him even in death. 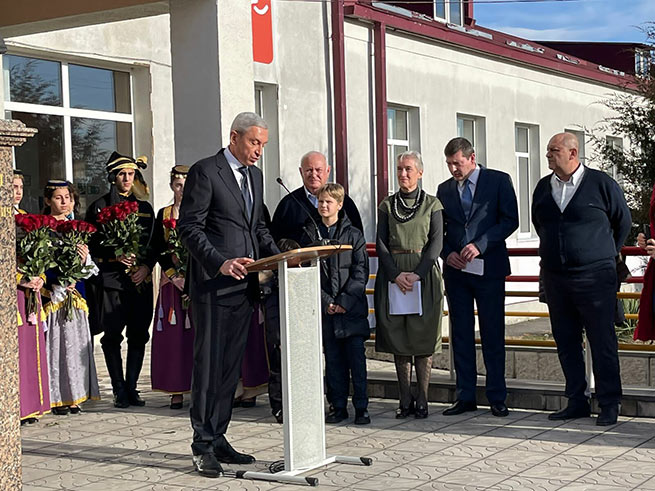 The new school, donated by Greece and Norway, has been in operation since September 6, 2010, six years after the horrific attack, and today its director is his son Kostas. 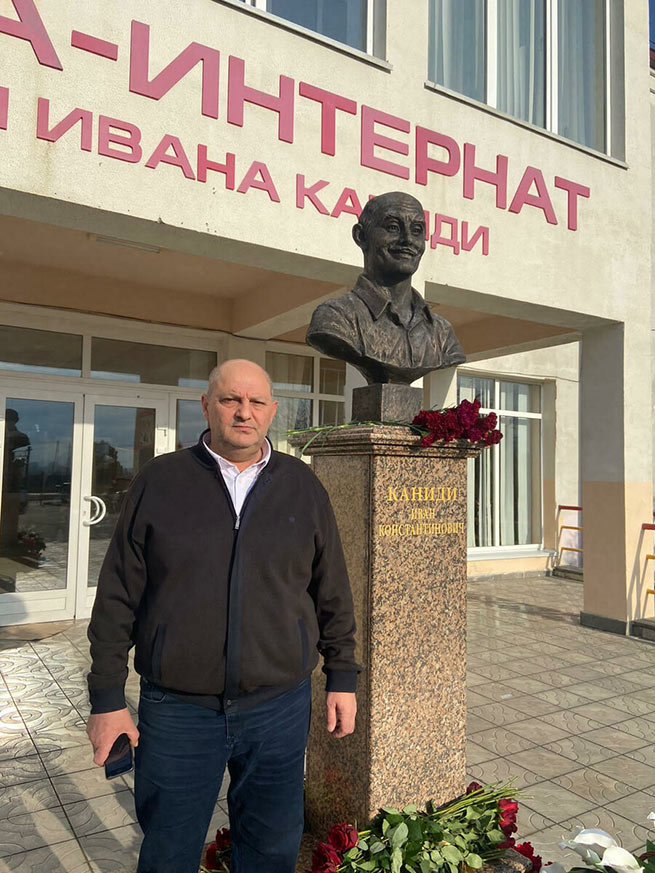 The headmaster and son of the hero Kostas Canidis next to the bust of his father.

The bust of Yiannis Kanidis was created by the famous Russian sculptor from Moscow, Irini Makarova: “It was difficult to make a smiling face out of a hard material such as bronze, but knowing the story of a teacher and a man full of kindness and self-sacrifice, I accepted the photo that his son offered me,” – she said.