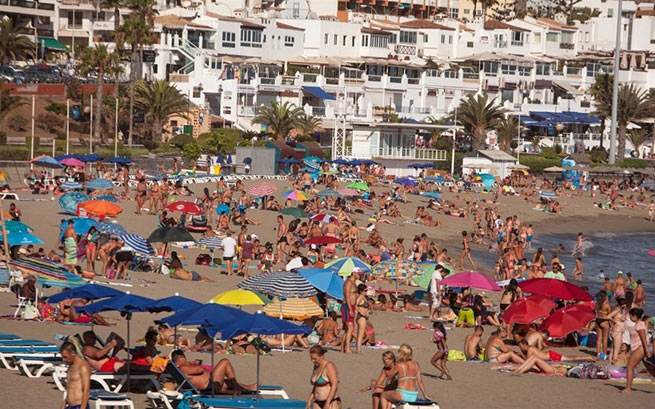 The recovery of the tourism industry in the countries of southern Europe offset the rapid decline of the economy in the north and seems to have a chance to limit the recession of the Eurozone as a whole in the third quarter.

Goldman Sachs reveals a real growth gap between the north and the south of the Eurozone, but this time it is the countries of the south who are in the winning position, and they are the ones driving the average growth rate.

Greece, Spain and Portugal are showing strong performance in the tourism sector, and their growth prevents a deep recession in the Eurozone. However, the investment giant believes that recession has already become a reality for the Eurozone, as it already started in the third quarter, and is expected to continue into the last quarter of the year.

According to Goldman Sachs, indicators of current activity show that in many countries of the European south, there is a significant increase in the summer months. In general, PMI indicators show that economic activity in the service sector is significantly slowing down throughout the eurozone, but the southern countries are showing strong growth in the services sector and, in particular, in tourism, although this sector is especially sensitive to the development of the pandemic. Goldman Sachs also sees great room for further growth in the tourism sector in the southern countries. As he notes, the data provided so far on tourist traffic in the summer months marks a very good tourist season, which can significantly boost economic growth in Greece, Spain and Portugal. At the same time, the same indicators point to a shrinking economy in the larger countries of the European north, such as Germany.

Goldman Sachs talks about a growth gap between south and north, but in favor of the former.

However, strong growth in the southern countries offsets the rapid slowdown in the northern economies, and it looks like the recession in the Eurozone as a whole will be significantly reduced in the third quarter. The data point to slower growth in the Eurozone as the composite Purchasing Managers’ Index (PMI) fell further below the 50 mark separating growth from recession in August. At the same time, the situation in the European gas market continues to cause concern, although it is reassuring that the first and third economies of the Eurozone, Germany and Italy, have reached their gas storage targets ahead of schedule. However, as Goldman Sachs notes, at the same time, gas prices remain at a very high level, and the supply of this fuel has been sharply reduced through the Nord Stream 1 pipeline, which is undermining economic growth.

Meanwhile, in Germany, gas consumption has been largely replaced by oil, and the demand for gas has fallen sharply (due to its lack, and not to a decrease in consumption. Note by the editors). The consumption of this fuel has decreased by almost 25% compared to the average for the past five years. As noted by Goldman Sachs, in the coming months there may be a significant reduction in production due to this decline.

In terms of inflation, the US investment giant expects inflation to average 10.3% in the fourth quarter of this year, with gas prices likely to remain at their current high levels. Overall, he expects the Eurozone recession to be mild, with GDP shrinking by 0.1% in the third quarter and 0.2% in the fourth quarter. However, in the event that the Eurozone faces a more serious gas supply shortage, Goldman Sachs believes that there is a risk of falling into a recession, and much deeper and longer. Meanwhile, Germany and Italy will be the hardest hit, where GDP will decline even more, while France and Spain will continue to show positive growth rates.

Finally, on the way forward for the ECB, he still sees a 50 basis point rate hike at the September meeting as more likely as the bank is being nudged into aggressive action after the U.S. Federal Reserve’s rapid rise in borrowing costs, but at the same time its room to maneuver limited by the impending recession in the Eurozone. However, given the recent announcements by ECB officials calling for consideration of a 75bp rate hike, a surprise move in September cannot be ruled out. Goldman Sachs expects the bank to slow down its rate hikes by 25 bps. in October, so that by the end of the year the base rate will be at the level of 1.5%.