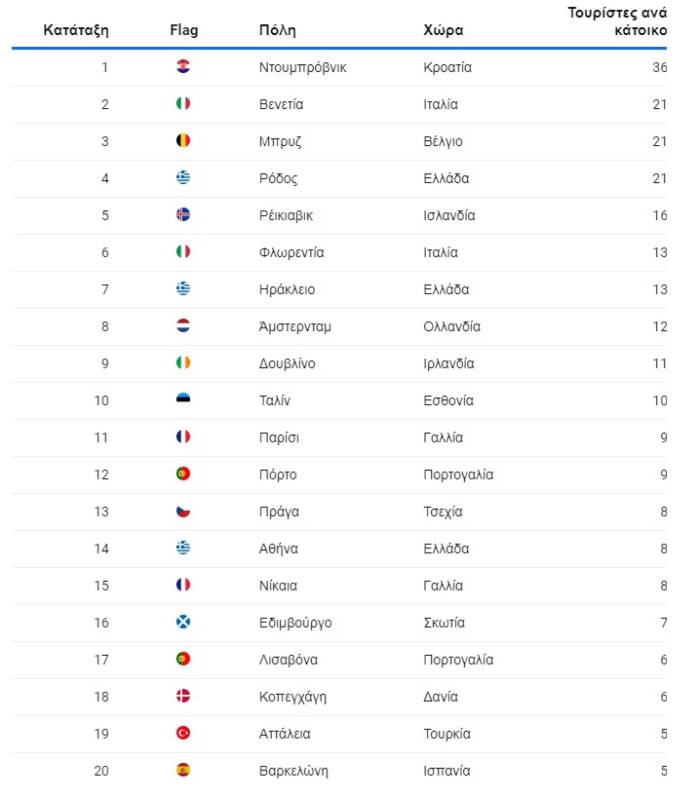 The rating of European cities that are “crowded” with tourists was published by the Holidu search engine, on which a corresponding survey was conducted.

Holidu bills itself as the “best rental search engine” that promises to help you find great accommodations at low prices. Using statistical data, the company published a ranking based on the number of tourists per year, in relation to the population of the city.

There are two Greek cities in the list of 10 cities, these are Rhodes and Heraklion, occupying the fourth and seventh places, respectively. A little further, in 14th place, are Athens. As for Rhodes, Holidu notes: “This is the largest island in the Dodecanese. Rhodes is known for its ancient monuments and stunning seaside resorts, so it’s easy to see why. 21 tourists per inhabitant. Walking along the medieval streets and contemplating the palaces, you can also visit the magnificent beaches along with the cultural program. We strongly recommend that you visit the island between April and May to avoid peak tourist season, crowds and exorbitant prices.”

According to the ranking, Dubrovnik is the most visited city, and Holidu encourages travelers to come here in early May or from mid-September to mid-October.

“Officially, Dubrovnik is the most populous city in Europe. In Dubrovnik, famous for its impressive orange roofs and participation in the famous “Game of Thrones”, on each inhabitant accounts for 36 tourists. Dubrovnik, with a relatively small population, receives an influx of tourists during the summer months, especially in July and August. We recommend arriving in early May or mid-September to mid-October to avoid crowds. Although in September there are still some events that attract foreign visitors, such as the International Music Festival, ”the message says.