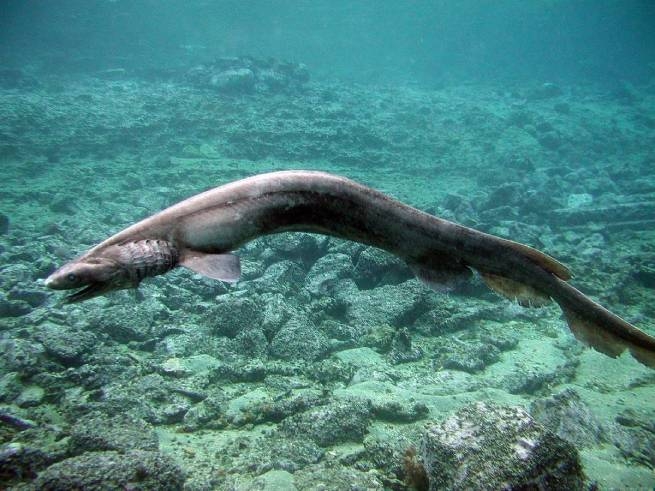 Not all sharks are bloodthirsty, many feed on plankton, and some even look completely different from representatives of this subclass of elasmobranch marine life.

All of us at the word “shark” imagine a toothy predator that attacks swimmers, fishermen and surfers. But there are rare species of sharks that few people know about. Let’s get to know them BB.LV.

This type of shark is more like a water snake. It is also called a “living fossil”: originally from the Cretaceous period, the frilled predator has not changed a bit during its existence. The oldest animal got its name for the serpentine shape of a long 2-meter brown body and folded skin that covers the gill openings. The gill membranes, intersecting at the throat, form a wide bag of leather that resembles a cloak.

It lives in the Pacific and Atlantic oceans. Pregnancy of female frilled sharks (Chlamydoselachus anguineus) lasts more than three years. The ancient shark leads a benthic lifestyle, at a depth of up to 1500 meters, and feeds on mollusks, crustaceans and flounder. However, as a meal, he will not refuse sharks of other species.

Only recently it became known that this species is capable of vertical migrations – when the temperature changes or there is a lack of food, the chimera fish approaches the surface.

This tiny species of shark is almost unexplored, they rarely came into the view of researchers. The strange species is notable for its size – the maximum length is only 21.2 cm. Etmopterus perryi lives in the Atlantic Ocean, off the coast of Venezuela and Colombia, at a depth of 283-439 meters. Another name for this crumb is a pygmy luminous shark. Like other species of Etmopterus, it is able to reflect light using the available photophores.

This shark is not at all like relatives, but it resembles a stingray. The flattened body and enlarged fins make it possible to almost completely copy its shape. The sea angel reaches more than one and a half meters in length. He leads a benthic lifestyle, feeds mainly on flounder, the female gives birth to up to twenty cubs. Occasionally found in the northeast Atlantic, this rare shark species is sadly on the verge of extinction.

Earlier, our publication reported that Greek fishermen caught 200 kg shark. It took two men a whole two hours to fish out a huge fish caught on a hook.

Sharks of the Mediterranean Sea have about 47 species, 16 of them reach about 3 meters in length, and 15 are considered dangerous to humans. However, this danger is very conditional: for 161 years of observations in Greece 14 cases of attacks and 11 deaths were recorded.