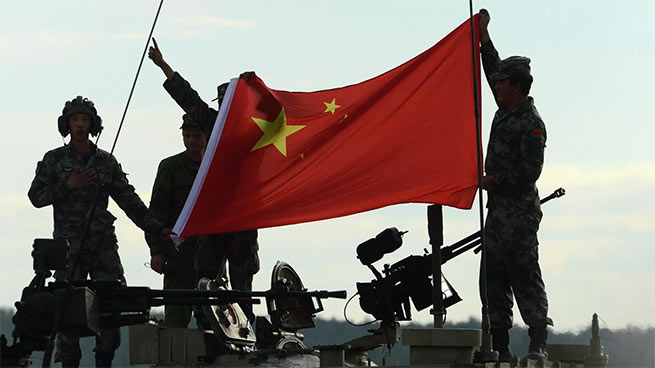 The largest military “bloc” in history is a fait accompli as Russia, China and India pool their military forces and forge a rival military alliance to rival the West.

Military from China and India have begun arriving in Russia to participate in the joint Vostok 2022 exercise, demonstrating the devastating failure of Western efforts to isolate Russia while pushing the major Eurasian powers to form their own coalition that the US will face in the future.

#BRICS👉#Russia to begin #Vostok2022 drills with troops from #Chinalikely #India

The mention of the global situation appeared to be a veiled reference to #Ukraine🇺🇦 and the escalation in 🇨🇳🇺🇸 tensions over #Taiwan🇹🇼 after #Pelosi‘s #TaiwanStraitsCrisishttps://t.co/fcl855Hu3E pic.twitter.com/MIuXT20gmB

Two of the planet’s three superpowers, as well as the great regional power India, are participating in the military exercises.

These exercises will take place from September 1 to 7 in the Russian Far East with the participation of military personnel from many countries that border or are allies of Russia, such as Belarus, Syria, India and China.

The exercise comes amid rising tensions between Russia and the West over the war in Ukraine, and between the US and China over Taiwan.

Washington is concerned about the possibility of further rapprochement between China and Russia, two countries already with close strategic ties, believing that this will jeopardize global security.

In fact, the United States, with its pressure on Russia, sanctions and the use of the dollar as a means of coercion, pushed Russia into an alliance with China and India. The Chinese are not naive and understand that after Russia their turn will come. As for the Indians, they have traditionally been on the side of the Russians. The Russians never abandoned them, and at the word “Anglo-Saxons” they begin to jar.

Even though India has a rivalry with China, they know that with Russia they can overcome it, while they understand the power they can gain by joining with the power of Russia and China.

This is a “bloc”, the power of which exceeds the nuclear and conventional power of the NATO countries.

“Units of foreign military personnel participating in the Vostok-2022 exercises arrived at the Sergeevsky training ground of Primorsky Krai (in the Far East of Russia), having started preparing and accepting their equipment and weapons,” — reported in the Ministry of Defense of Russia. – In total, more than 50,000 servicemen, more than 5,000 pieces of weapons and military equipment, including 140 aircraft and 60 warships and general support vessels, will be mobilized.

The main tactical actions will be worked out at the Sergeevsky training ground in Primorye. In the Sea of ​​Japan, joint actions to defend sea lanes and areas of maritime economic activity, support ground forces in the coastal direction will be worked out by the forces of the Pacific Fleet and the Chinese Navy. Also, the maneuvers will take place at the training grounds Burduny, Goryachiye Klyuchi, Knyaz-Volkonsky, Lagunnoye, Telemba, Uspenovsky and in the coastal areas of the Sea of ​​Okhotsk.

During the exercises, commanders and staffs will improve their skills in managing interspecific and coalition groups in repelling aggression in the eastern direction and in the Far Eastern sea zone. It is also planned to increase the compatibility and level of interaction of coalition groups in the performance of joint tasks to preserve peace, protect interests and ensure military security.

As noted in the Ministry of Defense, the actions of the troops involved will comply with the Agreement on confidence building in the military field in the border area of ​​1996, between Russia, Kazakhstan, Kyrgyzstan, Tajikistan and China.
© RIA Novosti / Evgeny Biyatov / The crew of the Type 96 tank of the Chinese army. Archive photo

In mid-August, China confirmed sending troops to Russia to participate in military exercises, indicating that their presence “in no way connected with the current regional and international situation”but that everyone understands that it is directly related to what is happening in Ukraine and to the US-provoked tensions around Taiwan.