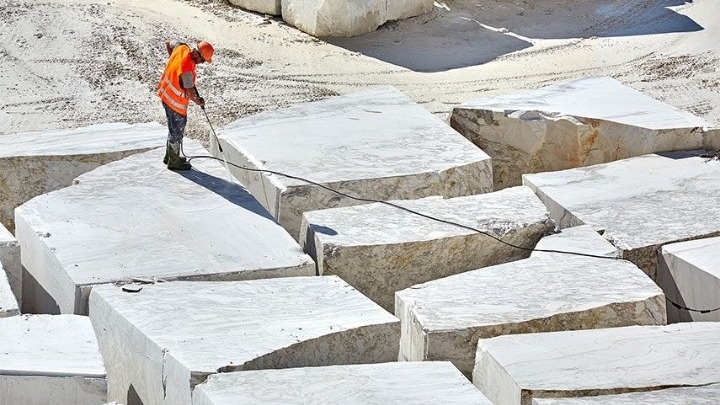 Greece ranks 4th in the world ranking of marble exports. According to Marble Consulting, the global marble trade is worth $5.5 billion. Euro.

40% is marble volumes and 60% marble slabs, 80% of world exports are to Turkey, China, Italy, Greece and Spain.

From 2009 until today, despite the continuation and gradual deterioration of the situation, in view of the subsequent series of blows to the country’s economy, the Greek marble industry “turned its face” to foreign partners, increasing its exports.

The export ratio of Greek marble is 42.1% processed and unprocessed 57.9%. 80% of Greek marble is exported to 110 countries. The main destination countries are China, USA, UAE, Qatar, Saudi Arabia, Mexico, Algeria, Turkey, Italy, India. Marble reserves in Greece are huge and, as experts say, are practically inexhaustible.

There is an active mining and quarrying activity in Greece, analysts say, and some companies in the sector have switched to underground mining in recent years. According to the registered data of the Ministry of the Environment, in Greece there are 265 quarries for the extraction of marble and natural stone, 159 construction quarries (crushed stone, etc.), 67 industrial quarries, 52 mines (excluding lignite), 15 lignite quarries.

The largest marble production exists in Eastern Macedonia and Thrace. More than 40 marble companies and more than 100 licensed quarries operate in the Drama area.

About 670 companies operate in the marble mining and processing sector, employing more than 6,200 people, and the total employment in this sector is estimated at more than 19,200 people. The main marble quarries are located in the areas of Volakas, Granitis Ochiro, Stenopos, Nestos, Limnia, Piges, Elafochori, Disvatos, Vatilackos, Palea Kavala, Thassos.

Greece is home to some of the largest marble companies in the world, with careers in other countries as well.