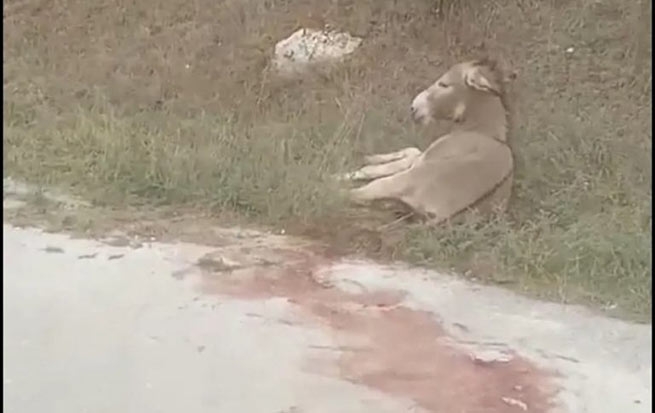 The 63-year-old deputy mayor of the municipality of Zitsa in Epirus was arrested on Sunday for the unprecedented mistreatment of a donkey.

The man was dragging tied with a rope to the body of his pickup donkey for almost a kilometerand at this time, a seriously wounded animal left a long bloody trail behind it.

The man, who is also a breeder, was stopped by shocked and angry locals, and one of them filmed the abuse and sent the video to the police.

Local media, police and members of animal protection societies arrived in the area. The deputy mayor told journalists of the state television and radio company ERT that everything was in order with the donkey, and he was taken to him. He told police officers that the whole situation was an accident and he had no intention of harming the animal. To angry locals who reproached him for his cruelty, he said that he “did not know that he was dragging a donkey.”

Local residents told ERT TV that the man later called his son, and they took the unconscious animal from the side of the road where he was, loaded him into a pickup truck and drove off in an unknown direction. Since all the evidence was against the man, he was arrested on Sunday at noon.

AT statement Police say the man will be taken to the local prosecutor’s office for violating the Animal Welfare Act.

Animal Welfare Association Κι.Δι.Ζω Ιωάννινα said in a post that its members searched for hours for the unfortunate animal to see if it could be saved. “Instead, we found the remains of a large animal being devoured by many emaciated dogs outside the man’s farm. The entrails have been taken to the veterinary office while the police investigation continues.

According to local news site epiruspost.gr, members of the municipality of Zica demand the immediate dismissal of the deputy mayor and the intervention of a decentralized administration. In a statement, the faction expressed “its disgust and shock at the shameful facts, as well as its concern about the cruel behavior of the deputy mayor towards an animal in the Grammenochoria district.” “We deserve the best people to serve our community,” the faction stressed.

Not only the local population is shocked…