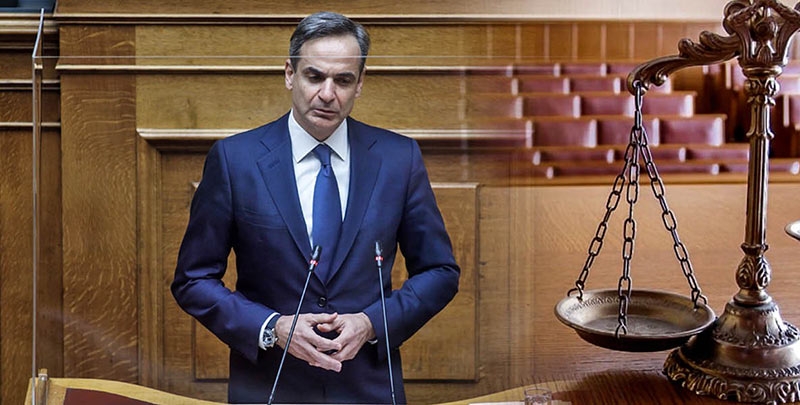 Greek Prime Minister Kyriakos Mitsotakis apologized, saying the wiretapping was based on false information as Greece was threatened by Turkey.

“As you know, immediately after the election, I invited Mr. Andrulakis to meet and get to know me, but he refused.

He said then, and now, that he wanted nothing to do with the government, and that he would not accept my presence as prime minister even if New Democracy won the election. He has the right to choose his friends and allies, but he must know that the Greek people choose their prime ministers.”

In fact, the prime minister refuses to explain from the floor of parliament why the telephone of PASOK President N. Androulakis was tapped, saying: “If you want to know, go to court”knowing, of course, that this procedure will take … several years, and after the decision is made, the case will go into the “trash can” of history.

“If Mr. Androulakis insists on questioning the legitimacy, I urge him to take it to a Greek or European court“, – he said.

It is noted that answers to questions about the reasons why the National Intelligence Services activated surveillance mechanisms were requested by Mr. Nikos Androulakis during yesterday’s meeting of his party’s parliamentary group. “I invite you to publicly state the reason for my observation. Tomorrow you must tell the Greek people the whole truth,” he said.

“You’re not going to mess around with Secret Service files like you did with the Committee on Institutions and Transparency. You present yourself as defenders of institutions that you saw through your behavior“, he added.

Mitsotakis turned down this request, knowing that N. Androulakis would not be able to speak in parliament today, as he is an MEP, not a member of parliament. It is noted that Prime Minister Kyriakos Mitsotakis took the podium of the plenary session of Parliament for his first speech in the debate on the provisional agenda in Parliament, at the level of party leaders on issues of observation.

Debates are held in accordance with Rule 143 of the Rules of Procedure of Parliament, at the initiative of the leader of the opposition and the chairman of the SYRIZA parliamentary group, Alexis Tsipras, at the level of party leaders “about surveillance of political opponents and journalists by the National Intelligence Service (ΕΥΠ), reporting personally to the Prime Minister“.

The prime minister began his speech by saying that “the discussion is moving faster in the hope that it will lead to solutions to fill the gaps”. He called for the debate to be held in an atmosphere of national ownership and to strive for rapprochement at this level.

“When I was informed of Mr. Androulakis’ follow-up, I did not hesitate to admit that it was a mistake. I called for resignations and for the case to be referred to the Committee on Institutions and Transparency, and for the creation of a commission of inquiry.

I also presented 4 sections of changes designed to shape a new reality in the dark space of the secret services. No initiatives, he said, should interfere with the work and slow it down.

ΕΥΠ contributes to our daily defense operations and crimes are solved. It wins counter-terrorism victories by preventing terrorist attacks in cooperation with other agencies abroad. Nothing should question this national branch of government. She shouldn’t be paralyzed for a second because that would be a disaster.“, he stressed.

The Prime Minister said that “There are currently 500 illegal programs circulating around the world that provide access to mobile phones. ΕΥΠ contributes to our daily defense operations and crimes are solved. “One slip should not detract from the national work of ΕΥΠ.”

The prime minister referred to the post of journalist Tasos Teloglu and said that “it would be very interesting to know which paracenters listened to us at the time when Tsipras was prime minister. As for legal backlinks, he said they cover a wide range. The case of Nikos Androulakis revealed a gap in the protocol.

The procedure was carried out in the usual manner, as provided for in the position you accepted. The difference was that it was a prominent political figure. In this case, ΕΥΠ should have used other filters”– said Kyriakos Mitsotakis.

He recalled that with the addition of the second prosecutor, another filter was introduced. “All over the world, the activities of the secret services are due to secrecy, and it is to this that they owe their effectiveness, and their employees are bound by a lifetime non-disclosure subscription.“, he said. The Prime Minister also said that from the very first moment he called for personally informing the person concerned, “because you know this information cannot be made public.”

Speaking about the Prosecutor of the Supreme Court and his investigation, Kyriakos Mitsotakis stressed that he is an honest judge who should not be targeted. Public figures should not separate on the basis of their status alone and feel that they are inviolable. The prime minister also referred to reports in the foreign press, saying that Greece is a modern democracy and has the ability to remedy its shortcomings through structural changes. He mentioned the changes that he is going to make to the work of the NIS:

“Additional precautions will be taken, especially regarding public figures and communication with the relevant parliamentary bodies. Now it is necessary to hear the commander of the NSI. The new commander suffered the anguish of the hearing, whether or not you tried to violate any notion of his secrecy:

Speaking about Demiris, he said that the appointment of an experienced diplomat to this position is a reliable guarantee. He will need support, as well as the use of the practice of similar structures in other countries and the proposals of the parties from the commission of inquiry, the Prime Minister stressed.

“I am not surprised by the position of Mr. Tsipras. In every national mobilization he was against. Against the pandemic, against immigration and border protection, against national agreements to strengthen the country’s defense, against bold measures to contain the energy crisis, and now against the modernization of ΕΥΠ. As well as now, the life of Mr. Tsipras will refute the new scenario of catastrophism.Of course, it was wrong, but as soon as I found out about it, I dared to separate my position from the practice of other times, and you insist on raising a finger, having two of your ministers in a special court,” the prime minister said.

“This is too much,” he said, “you call me the leader of a criminal organization. You, who were accused of wiretapping by five former colleagues: Panousis, Valavanis, Kotzias, Varoufakis, Lafazanis.”

He added: “I would like you to clarify something that you said in 2019 in Parliament, Mr. Varoufakis, the Prime Minister said and referred to your book. I heard Mr. Tsipras name the period of Mr. on Rubatis during the golden period. This is not so. I personally know that under him the dark state worked against our government, and Mr. Rubatis played an important role in this.”

“It was not my conscious choice to address issues of the past,” the prime minister said, adding that his political path proved that we are not all the same. According to him, it is absolutely clear that SYRIZA and PASOK are trying to instrumentalize this issue:

“It is dishonest, immoral and deceitful to present failure as a mandate from society and, through aggrandizement, to offer on a silver platter what all those who are outside the borders are hiding behind.”

“Tell us, Mr Skandalidis, did Andreas Papandreou do the right thing when he handed over responsibility for ΕΥΠ to the office of the Prime Ministerhe said,I guess your leader has other plans. PASOK’s complicity with SYRIZA in this matter is absolute, which is why many of PASOK’s friends are wondering if voting for Androulakis will result in Tsipras winning“.

The Prime Minister wondered what Tsipras’s phrase means “there is not enough rotation in power, and what does the phrase mean “reconstruction of the 3rd Greek democracy”.

“It is unacceptable and irresponsible to reduce a single mistake to a problem of democracy that needs to be rebuilt and recreated. How will this be done – by a revision of the constitution or by a constitutional parliament? Be careful, Mr. Tsipras, because ΕΥΠ’s misdeeds have a long history. You cannot and do not have the right to open questions relating to other eras with one mistake. Tell us about your plan. Maybe with judges appointed by Mr. Polakis?” said the prime minister.

Mitsotakis asked everyone to tone down, raise the profile of ΕΥΠ, and draw a red line on yesterday’s mistakes: “Do not forget that our neighbors remain unpredictable. A new wave of invasion is already being planned in Evros under ostensible humanitarian cover”.

He said that in this country there can be no “powers that hush up lies.” Speaking of the Evros incident, he said: “Turkey sent a group of migrants to its territory, and as soon as the refugees entered Greek territory, they found protection. It is unacceptable to talk about anything else. It is unacceptable for Greek lips to repeat Turkish arguments.”

The Prime Minister also stressed thatthe overall picture is that Greece is now officially out of the zone of heightened surveillance. “It leaves behind memorandums, taxes, closed banks, pension cuts, people in the squares“Mitsotakis also said he would not allow anyone to change the course of the country.”I know,” he said, “that there are interests inside and outside that want weak governments.” I would like to address all of them with a direct word in Greece: in 2022, other ports will not be resurrected, from which some people asked for rubles or drachmas. No foreign media will be funded or made special to destabilize the government and the country. I will not retreat, and the Greeks will not retreat. In a democracy, only the people make decisions, and they do not delegate them to anyone.

“You are calling for elections in this climate of instability to drag the country into a three-month gamble. Can’t you see what’s going on in Italy? Mr. Tsipras, you are pandering to those who do not want Mitsotakis and ND. I will bear the costs to bring the country to a stable port. This government has proven that it does not succumb to pressure. We are also boldly self-critical. Last year, I boldly spoke in public about devastating fires. Today the mechanism works much better. We bent over the problem“.