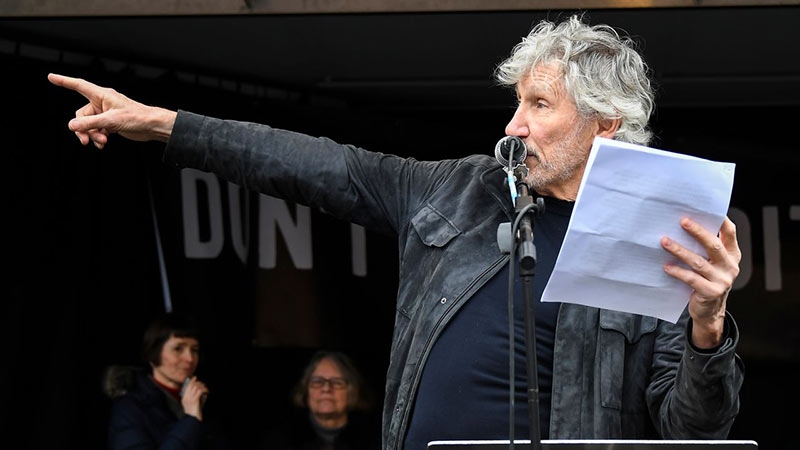 Infamous Ukrainian website “Peacemaker“accused the musician Roger Waters, one of the founders of the rock band Pink Floyd, of “anti-Ukrainian” crimes.

The site features screenshots of an interview that Waters gave to Russian media in 2018, as well as general information about Waters and the musician’s statements about the war in Ukraine, made by him in recent interviews. For example, he quotes his comments about the Crimea, the support of the US State Department of the Council of Commerce of 2014 in Ukraine and the Russophobia campaign. The site also cites his characterization of Russians as “bold, resilient and relentless”.

At the bottom of the page, Peacemaker calls on “law enforcement agencies” to intervene in the case of Waters for his “deliberate actions against the national security of Ukraine, against peace, the security of mankind and international law and order, as well as for other offenses.”

As the Athenian news previously reported the Peacemaker website was founded in 2014 by Anton Gerashchenko, a former assistant to the Minister of Internal Affairs of Ukraine. It lists personal information such as the addresses and phone numbers of some of the alleged “enemies of Ukraine” he names. The site became infamous when several people it singled out were killed. Among them, the Ukrainian writer Oles Buzin, former Ukrainian deputy Oleg Kalashnikov and the Italian freelance photojournal Andrea Rockelli.

Among the thousands of names listed by the Peacemaker, there are the names of journalists, businessmen and politicians, both Ukrainian and foreign, incl. several famous Greek politicians, Greek cartoonist and … editor of this edition. Besides Waters, notable names include Viktor Orban, Prime Minister of Hungary; Gerhard Schroeder, former Chancellor of Germany; Henry Kissinger, former US Secretary of State; and Bashar al-Assad, President of Syria. In confirmation of its thoroughly dirty and reactionary character, “Peacemaker” also cites the names of more 300 children.

Waters has long spoken out against nationalism and war in his music and in interviews. His own father was killed during World War II and his grandfather during World War I. Among the themes of the legendary Pink Floyd album The Wall (1979), of which Waters was the main author, is the threat of fascism. final cut (1983) contrasts the patriotism promoted by the British state during World War II with what Waters saw as a betrayal of the country of his fallen soldiers. It also includes strong statements against the Falklands War.

In his comments on the war in Ukraine, Waters demonstrated an understanding of history and a healthy opposition to state power. He consistently distinguished between ordinary people and the states in which they live. Regarding the status of Crimea, Peacemaker quotes Waters: “I know that Sevastopol is very important for Russia and Russians. There are many agreements and papers according to which Russia has all the rights to this city.”

Waters rightly argued that the war did not start with the Russian invasion of Ukraine in February. “The change of power in Ukraine [в 2014 году], planned by Washington, simply provoked Moscow to take further action, ”he said. In a recent CNN interview , which attracted considerable attention, Waters categorically denied the theses of the US State Department, which was repeated by the interviewer Michael Permonish. He stressed that NATO’s eastward expansion, carried out in violation of diplomatic assurances given to Russia, was an important factor contributing to the war.

Waters also provoked irritation by pointing out the hypocrisy of President Joe Biden in insisting on upholding international law. The Peacemaker quotes Waters, who noticed that the United States themselves freely violate international agreements when they contradict their imperialist interests. “They constantly break them and claim they can do whatever they want,” Waters said. “This position just scares me because someday it will just kill us all.” Waters also said that Western politicians are using the campaign of Russophobia and the demonization of Russian President Vladimir Putin to suppress domestic opposition.

Despite how he is portrayed in various publications, Waters does not support Putin. In response to a letter from Alina Mitrofanova, a 19-year-old Ukrainian fan, Waters wrote: “I read your letter, I feel your pain, I am disgusted by Putin’s invasion of Ukraine, I consider this a criminal mistake.” In March, he published his response as open letter on Facebook.

Waters added that “Western governments are fueling the fire that will destroy your beautiful country by pouring weapons into Ukraine instead of engaging in the diplomacy needed to end the carnage.” He also politely denied Mitrofanova’s statement about the political atmosphere in Ukraine. “Your ‘200 percent’ belief that there are no neo-Nazis in your country is almost certainly wrong,” he wrote, referring to the Azov Battalions, National Corps and C14 as “well-known neo-Nazi groups. Such statements have drawn the ire of the Ukrainian far right and their sponsors: the US and NATO imperialists.

Waters is currently performing on his This Is Not a Drill tour. wherein, “uses extensive figurative imagery to denounce the ruthlessness of the ruling elite in the US and around the world. Almost every song deals with the pressing issues of our time: imperialist war, fascism, the poison of nationalism, the plight of refugees, victims of state oppression, global poverty, social inequality, encroachment on democratic rights and the danger of nuclear annihilation. “.

Speaking about the tour, Waters recently said, “I have this weird feeling that, unlike other shows I’ve done in the past, this show is like turning into a movement. I’m not saying I’m leading a movement, but I’m saying that I’m part of a movement and there are so many people in the audience who are or could be part of it that it feels like we’re really together and that we’re really talking to each other.”