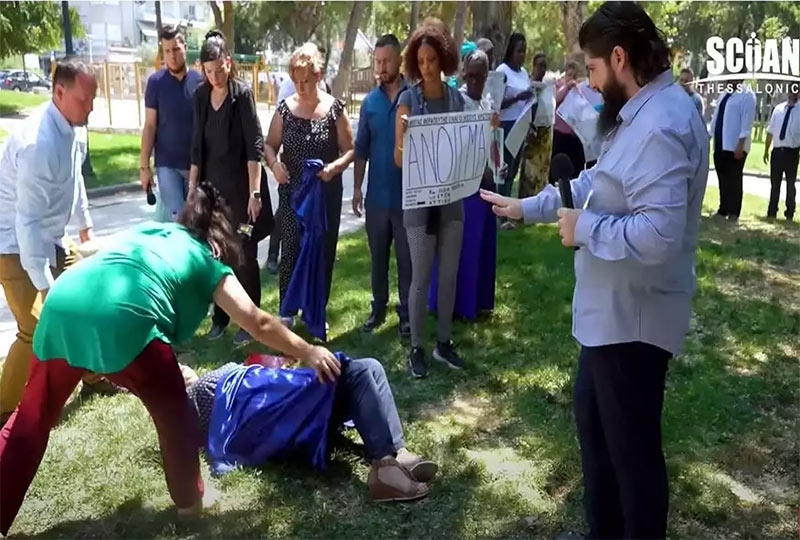 The “exorcism of the devil” was shown on the big screen, and a crowd of people watched with curiosity the new … transcendental experience. The exorcisms were also conducted in English so that the tourists could understand.

Alarmed by unauthorized exorcisms, the Holy Synod of the Church of Greece held an emergency meeting on Thursday and urged believers to refrain from participating in such events. At the same time, the local prosecutor’s office ordered an investigation into whether the group occupied public space without permission from the authorities.

The event took place on 21 August without the permission of the local authorities and was initially widely covered by the local media in northern Greece. It is reported that two similar events were also organized in July.

What is this sect, who is the leader, what do they represent, what do they want, do they want to preach, what is the purpose of outdoor exorcism and how did they manage to put chairs, megaphones and a huge screen in the central square of the city without permission?

Dozens of questions arose. Then, of course…

A heated discussion flared up on the television and radio screens of the second largest city in the country. A local lawyer said that “such events offend and provoke the morality of the Greek Orthodox society.”

“They applied for permission to host the event after it had already taken place,” a member of the Thessaloniki Municipal Council said on one of the TV panels.

However, a representative of the organization “Εκκλησία των Εθνών” (“Church of Nations”) told the publication ethnos that both the municipality and the police present knew about this event in advance, as they were informed by the organization. The spokesperson also said that about ten exorcisms are performed during each event.

He added that the participants in Aristotle’s Square were parishioners who visit the “Church” located near the airport, tourists visiting Thessaloniki, as well as people who have heard of the “Church of all Nations”.

Papanakidis also said that the exorcisms were conducted in two languages, including English, so that tourists could also understand them.

The exorcists call out the name of Jesus Christ, ask the “demon” who he is, and then order him to leave the human body.

According to church sources cited mass media, a self-proclaimed sect called the “Church of the Nations”, a branch of the sect based in Lagos, Nigeria. The leader is a certain “Harris”, a Greek, whose real name is Charalampos C.

The organization has an unknown number of supporters in Greece, a website, a YouTube channel that shows some kind of staged “exorcisms”, and, apparently, it is going to expand its influence, seeking to convert people.

In one of the organization’s videos, broadcast by a private TV channel, a woman seemed to dance in a circle with partially convulsive movements and watched a man who stood next to her and shouted: “Go away! Get out!” Eventually, “it” disappeared, and “the woman was cured of all the cancers she had,” the report says.

Donations are welcome, the sect leader told the media. (People probably already forgot about Nigerian letters and other fraudulent schemes from this country, famous for scammers and .. pirates.)

Not surprisingly, the Greek Church was alarmed, albeit belatedly, probably because of the summer holidays.

After a two-day meeting, the Holy Synod spoke with statement which urged the faithful to refrain from joining such “ceremonies of supposed exorcism”, as was characteristically said.

According to the Holy Synod, an autonomous neo-Pentecostal sect is behind these ceremonies.* Such ceremonies are held in the central parts of major cities to impress and attract people.

The Holy Synod draws the attention of the parishioners of the Orthodox Church to avoid any participation in its ceremonies.

It should be noted that the District Attorney ordered the Thessaloniki Security Department to conduct a preliminary investigation to find out whether the crimes of proselytism, illegal occupation of public places and disturbing the public order were committed, reports grtimes.gr

* Neo-Pentecostalism or the neo-charismatic movement is a movement within evangelical Protestant Christianity with features of trans-denominational renewal. Rector Nikolo-Ugresh Theological Seminary Candidate of Theology Hegumen John (Rubin) described him as occult sectarian movement.